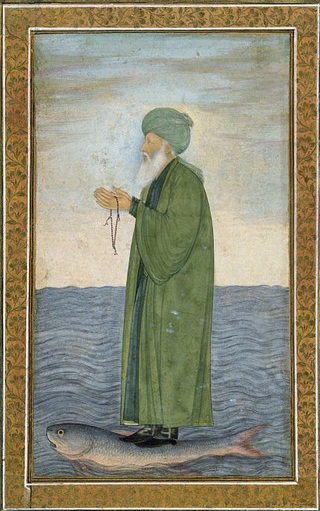 (Peace and Blessings of Allah be upon him)

“Whoever enters the Way without a guide,
will take a hundred years to travel a two-day journey.

said, ‘In this Way,
you have no more faithful companions than your works.’

How can these works and this earning in the way of righteousness
be accomplished without a master, O father?

Can you practice the meanest profession in the world
without a master’s guidance?

Whoever undertakes a profession without a master
becomes the laughingstock of city and town.”

, whom Allah mentioned in the Holy Qur’an [18:65] as the servant of Allah who met with the Prophet Musa

“So they found one of Our servant from among Our servants , on whom We had bestowed Mercy from Ourselves and whom We had taught [unseen/heavenly] knowledge from Our own Presence…” (Quran, The Cave 18:65)

Khidr (as) preserved and maintained the Reality of the Golden Chain until the next link in the Chain, `Abdul Khaliq al Ghujdawani, could assume his destined station.

Why is he called Khidr (the Green man)

Imam Bukhari relates in the Book of Prophets; that the Prophet

said, “Al-Khidr (‘the Green Man’) was so named because he sat on a barren white land once, after which it turned luxuriantly green with vegetation.”

Story of Moses (as) meeting Khidr (as)

Moses was a highly powerful prophet, one of the five greatest ones whom Allah sent to this world: Noah, Abraham, Moses, Jesus, and Muhammad, Peace and blessings be upon them. Yet despite Moses’ elevated knowledge, Allah caused him to be in need of Khidr, even though Khidr was not a prophet. This is to teach us, as Allah said in the Holy Qur’an, that “Above every knower there is a greater knower” (Yusuf, 12:76).

“… We raise in degrees whom We will, and Above every knower there is a greater knower.” (Holy Quran, Joseph)

The story of Moses’ encounter with Khidr is related in Surat al-Kahf (Holy Quran 18:65-82) and goes thus: Moses and his servant found one of Allah’s servants whom Allah had honored uniquely and had taught knowledge from His Own Presence [18:65] . Moses said to him, “I would like to accompany you.”[18:66] He answered him: “You cannot bear to accompany me.”[18:67]

Moses was surprised and insisted he was able to do so. Khidr said: “You cannot, but if you do, do not ask about what I am doing no matter what you see me do. On that condition alone you may follow; but if you wish to ask questions, don’t follow me.” This meant that Khidr was going to do something that Moses would not understand, although he was the Messenger of a great religion. He was in need of Khidr to teach him something.

The Three Tests of Musa (as)

They took a boat and crossed the Tiberias River in Palestine. When they had reached the middle of the river, Khidr made a hole in the boat in

order for it to sink. Moses was unable to keep silent, saying: “Why are you doing this childish act? Those people gave you the boat, are you now scuttling it?” Khidr replied: “Did I not tell you you would be unable to keep company with me?” Moses had not yet understood, even though he was a prophet and could read hearts, that there was something taking place that he did not know.

They continued and found a young boy. As soon as they saw him, Khidr killed him. Moses said: “What are you doing? You sank a boat, and now you kill a child? This is against all laws!” Again Khidr said: “Did I not tell you you could not keep company with me? The third time you ask me, we will part ways.”

Then they reached a city where they asked for food. No one gave them any food, and they threw them out. On their way, they found a wall on the verge of collapse. Khidr rebuilt that wall and made it straight. Moses asked: “Why are you doing this? No one accepted us as their guests in this city, and yet you are building their wall for them?” Khidr said: “This is the point where we separate, for you did not understand the wisdom of what I am doing.”

The Interpretations of the Three Tests

“O Moses, what we do is what Allah tells us to do. First I caused this boat to sink because there is a tyrant who is seizing every boat from the poor people on this side of the city. In order for these people not to lose their boat, I made it sink. That tyrant is going to die tomorrow, and tomorrow they can retrieve their boat and use it safely. I killed the child because Allah did not want that child to cause his parents, who believe in you, to leave and run away from your religion. Allah will give them better children than him. I built the wall which belonged to a man who was in life very generous to the poor. When he passed away, he left a treasure buried under the wall for his two orphans. Were that wall to come down, people would see the treasure and take it. I restored it in order for the two children to receive their treasure later. You did not understand God’s wisdom.”

That was Moses who, with all the honor bestowed on him by God, found himself ignorant before Khidr. How can we, who know so little in comparison to Moses, consider ourselves knowledgeable if Moses himself, with all his knowledge in the Divine Presence, was unable to understand certain things? This is a lesson in humility for human beings, and particularly for scholars and religious leaders: “Your knowledge is not worth mentioning. There are others more and highly more knowledgeable than you. As high or deep as you travel into knowledge, there is deeper depth and higher height than where you stand.”

That is why, when someone sits to give advice, he must sit with complete humbleness and complete respect for the listener. He cannot consider himself higher than them, otherwise that light will never reach their hearts. That is also why each is in need of a guide, as was shown by the Guide of guides himself, the Prophet

, when he took Jibril

as a guide for Revelation, and when he took a guide in traveling to Madina.

“Moses was tested ‘by many ordeals’ [20:41] the first of which was the murder of the Egyptian [28:14-15], an act which he committed by Divine impulsion and with the approbation of God deep inside him, without however, his perceiving it; nevertheless he felt no affliction in his soul for having killed the Egyptian, although he himself was not acquitted until he had received a Divine revelation on the subject. For all prophets are interiorly preserved from sin without their being conscious of it, even before they are warned by inspiration.

“It is for that reason that al-Khidr showed him the putting to death of the boy, an action for which Moses reproached him, without remembering his murder of the Egyptian, upon which al-Khidr said to him: ‘I have not done it of my own initiative,’ recalling thus to Moses the state in which he, the latter, found himself when he did not yet know that he was essentially preserved from all action contrary to the Divine Order.

“He showed him also the perforation of the boat, apparently made to destroy the people, but which has, however, the hidden sense of saving them from the hand of a ‘violent man.’ He showed this to him as an analogy to the ark which hid Moses when he was thrown into the Nile; according to appearances, this act was equally to destroy him, but according to the hidden sense, it was to save him. Again his mother had done that for fear of the ‘violent man,’ in this case Pharaoh, so that he would not cruelly kill the child…

“Moses arrived then at Madyan, there met the two girls and for them drew water from the well, without asking from them a salary. Then he ‘withdrew to the shade,’ that is to say to the Divine shadow, and said: ‘O my Lord, I am poor with regard to the blessings Thou bestowest on Me’; he attributed, then, to God alone the essence of the good that he did and qualified himself as poor (faqir) towards God. It was for that reason that al-Khidr reconstructed before him the crumbling wall without asking a salary for his work, for which Moses reprimanded him, until Khidr reminded him of his action of drawing water without asking for reward, and other things too, of which there is no mention in the Koran; so that the Messenger of God — may God bless him and give him Peace! — regretted that Moses did not keep quiet and did not remain with al-Khidr, so that God could tell him more of their actions.”

Of Khidr’s sayings to Sahl at-Tustari (q) according to Ibn `Arabi:

“Allah created the Light of Muhammad

from His Light… This Light stayed before Allah for 100,000 years. Allah directed His Gaze upon it 70,000 times every day and night, adding to it a new light from His Light every time. Then, from that Light, He created all creations.”

left this world and condolence came, they heard a voice from the corner of the house saying, “Peace, God’s mercy and blessings be upon you, members of the Family of the Prophet

!” `Ali (r) then asked if they knew who this was, and he said it was Khidr

. Bayhaqi transmitted it in Dala’il an-Nubuwwa.