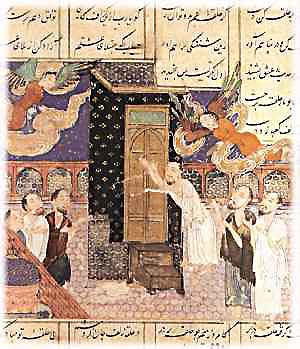 He was a Noble Flag of Islam and a great scholar who opened the locks to the treasures of the heart and explained secrets from the Unseen. He received, from the Kingdom of Knowers, Bounties and Prizes and Honors. He guided the needy to the station of Spiritual Knowledge. His name flew high in the skies of Guidance, and there are no words to express his knowledge nor his state. To us he may be described, like the Mother of Books (the Holy Qur’an), as “one written in an elevated state.”

He was born in the village of Ramitan, two miles from Bukhara. He lived there, and was avid in learning the knowledge of the Divine Law (sharica), until he achieved fame in the Sciences of Traditions (Hadith), Qur’an, Jurisprudenct (Fiqh), and the Exemplary Path of the Prophet

(Sunnah). He was a reference (marjac) for anyone asking for legal decisions (fatawa).

Then he contacted Shaikh Mahmad al-Anjir al-Faghnawi for spiritual guidance. In the Shaikh’s presence he was lifted up to the high stations of the Manifestation of Divine Love and the Divine Presence. He became known and famous under the name Azizan, a word in Persian used for one of elevated station. Following are some of his many sayings:

Mawlana Sayfuddin Fidda, a great scholar in his time, asked him, “Why do you raise your voice in Dhikr?” Sheikh Ali (q) said:

“O my brother, Muslim scholars throughout the centuries, from the time of the Tabicin (the generation following the Companions) up until today, have permitted the loud dhikr in the last moments of life. At this time those near the dying encourage him to repeat the testimony of faith. The Prophet said, laqqina mawtakum shahadatan LA ILAHA ILLALLAH (“make your dying ones say: There is no god but Allah”). In the Science of Sufism, the scholars have emphasized that each moment may be your last. This leads to the conclusion that you may say LA ILAHA ILLALLAH in a loud voice at every moment of your life.”

He was asked by Shaikh Mawlana Badruddin al-Midani, who was a great scholar in his time, “Allah has ordered us in the Qur’an to do excessive dhikr by His saying, “Remember Allah excessively” [33:41]. Is that dhikr to be by the tongue or by the heart?” Shaikh cAli Ramitani (q) answered:

“For the beginner it is best that it be by the tongue, and for the adept it is best that it be by the heart.” He continued, “This is because for the beginner to remember Allah he must apply a great deal of effort. Since his heart is distracted and unstable and his efforts are scattered, it is better for him to do it with the tongue. But the adept has already polished his heart and is easily affected by dhikr. All of his organs become Rememberers so that the whole body of the adept, both externally and internally, remembers Allah in every moment. The equivalence of this is that one day’s dhikr of the adept is equal to one year’s dhikr of a beginner.”

“The duty of a guide is first to know the capability of the seeker. Then he will put on his tongue the most perfect method of dhikr to raise him to the highest station.”

“If there had been on earth one of the followers of Abdul Khaliq al-Ghujdawani at the time of Hallaj, Hallaj would never have been crucified.” This means that there would have been someone capable of defending him from the accusations of the ignorant.

Shaikh Fakhruddin an-Nuri, another famous scholar in his time, asked him, “Allah mentioned in the Holy Qur’an that on the Day of Promises he asked, Alastu bi Rabbikum, qala bala [7:172] (“Am I not your Lord? — They said: Yes!”), whereas on the Judgement Day He will ask, liman al-mulk ul-yawm [40:16] (‘to whom belongs the Kingdom on this day?’) and no one will answer. Why is it that they answered the question, ‘Am I not your Lord’ whereas on the Judgement Day they will not answer?” In His answer, Sheikh Ali Ramitani (q) demonstrated the incredible depth of understanding of Qur’an and Holy Hadith possessed by the Naqshbandi Masters. He said:

“When the first question, ‘Am I not your Lord?’ was put to humankind, it was the day Allah had placed the obligations of the Sacred Law on all human beings. To reply when asked a question is an obligation under the Law. That is why they answered the question. However on the Judgement Day, all obligations have come to an end, and at that time, awareness of the Truth and the spiritual world begins. In spirituality there is no utterance better than silence, because spirituality is a flow from and to the heart unrelated to the tongue. That is why to the second question there is no need to give an answer. Allah Himself answers His own question, ‘To whom belongs the Kingdom this Day?’ by saying, lillah il-Wahid il-Qahhar, ‘It belongs to Allah, the Unique, the Irresistible’.”

Upon receiving a heavenly order he moved from Bukhara to Khwarazm. When he reached Khwarazm, he didn’t enter the city, but stayed at its gate and sent his messenger to the king to tell him, “A poor weaver has come to enter your kingdom and to stay in it. Do you give permission or not? If you give permission he will enter. If not he will go back.” He asked the messenger to obtain a written letter, signed by the king, granting his permission. When he received that letter the Shaykh moved inside the city and began to spread the Naqshbandi Sufi Way. Every day he went to the town center, speaking with the people, asking them to come to his association and paying their wages for that day. He made the entire city his followers, pious worshippers and dedicated keepers of remembrance. He became very famous in the city. People used to visit him from all around. His good reputation made the king and his ministers afraid of his influence on the people. They tried to remove him from the city. Having foreseen this event, he sent the letter back to the king. At that the king came to the shaikh and apologized, asking for his forgiveness. He became one of his foremost murids.

He had two sons who were very famous in following the footsteps of their father. However, he did not pass the secret on to them. Instead he passed it to Shaikh Muhammad Baba as-Samasi (q).