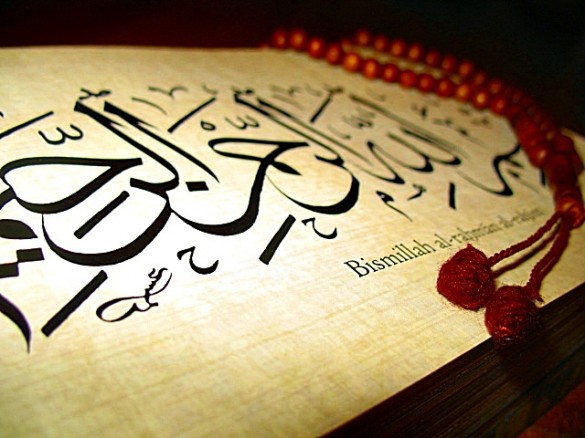 The Arabic letter Alif ا is equivalent to the letter ‘A’ in the English alphabet. It is the first letter in the Arabic character set.  Alif ا in Arabic numerology which is known as Abjad, it is also the first letter and has the value of 1. This article is about the spiritual meaning of the letter  Alif ا .

Alif ا is the first letter in the Name Allah الله. Everything is Created by Allah, so everything begins in the Name of Allah Most Gracious Most Merciful. Because الله Allah is Ahad (One), His Name, which is Ism Zaat – Personal Name, Starts with the Letter  Alif ا which has a numerical value of 1.

To show a crude example:

لَهُ   Lahu If we now take away the next Laam (ل) from Lahu we arrive at:

Hu
which is essentially هو

In each of the above instances we are referring to Allah and no one else. Then how can we say that God is the translation of the NAME ALLAH الله ? No one can justify substituting the word God wherever the Name Allah الله is used in the Quran. The Name Allah الله must be left alone as the Name Allah الله in all translations regardless of language. As stated in the article on the Letter Ha (ح) in the section Asma ul Husna (the beautiful Names of Allah) the sound of the Letters is very important. If we say “God“, we make a different sound to the one when we say “Allah الله “. Which sound would Allah Himself Like to Hear? After all Allah is the One who is Samee’ ud Du’a the Hearer of prayer.

Iman ايمان is belief. Muslims are required to believe. Believe what ?

“The Rasol (Messenger) believes in what has been revealed to him from his Rabb (Lord) as do the men of faith. Each one (of them) believes in Allah His angels His books and His Rasols (Messengers) “We make no distinction (they say) between one and another of His Rasols (Messengers).” And they say: “We hear and we obey; (We seek) Your forgiveness Our Rabb (Lord) and to You is the end of all journeys.”
[Quran: Al Baqara Chapter 2:285]

We have to believe in Allah because we have already agreed with Him that He is our Rabb ! That was in our spirit state. So how can we now deny that Allah exists now that we have hidden ourselves behind a physical body?

“When your Rabb (Lord) drew forth from the children of Adam from their loins their descendants and made them testify concerning themselves (saying): “Am I not your Rabb (Lord)?” They said: “Yea! we do testify!” (This) in case you should say on the Day of Judgment: “of this we were unaware.”
[Quran: Al Aaraf Chapter 7:172]

Those who believe in Allah, His angels, His books, His Rasols are Muslims. The religion chosen by Allah for a believer is Islam اسلام .

3 Forbidden to you (for food) are: dead meat blood the flesh of swine and that on which has been invoked the name of other than Allah that which has been killed by strangling or by a violent blow or by a headlong fall or by being gored to death; that which has been (partly) eaten by a wild animal; unless you are able to slaughter it (in due form); that which is sacrificed on stone (altars); (forbidden) also is the division (of meat) by raffling with arrows: that is impiety. This day have those who reject faith given up all hope of your religion: yet fear them not but fear Me. This day have I perfected your religion for you, completed my favour upon you and have chosen for you ISLAM اسلام as your religion. But if any one is forced by hunger with no inclination to transgression Allah is indeed Forgiving Most Merciful.
[Quran: Al Maida Chapter 5:3]

The beauty of the above verse is that it occurs in the first chapter with the name starting with the Letter Meem (م) – Maida مائدة. The word Islam اسلام starts with an Alif ا and finishes on Meem (م) . The Deen (religion) of Islam اسلام is perfected for Allah’s Beloved Muhammad

and his community – Muslims. And speaking of our Master Muhammad

, he is the direct the descendant of Ibraheem ابراهيم (

) is the only Messenger of Allah whose name has been spelt in two different ways in the Quran. Initially the name is spelt Ibrahim اِبرَاهِمْ (

) then the spellings change to Ibraheem ابراهيم (

) was seeking the Truth. He was seeking knowledge. He found the Truth. Then he asked Allah to show him how Allah gives life. Allah showed him how. Allah bestowed knowledge (ي) on Ibraheem ابراهيم (

Rasol Allah said, “We are more liable to be in doubt than Ibraheem when he said, ‘My Lord! Show me how You give life to the dead.”

65 People of the Scripture! Why do you argue about Ibraheem, when the Torah and the Gospel were not revealed till after him? Have you no sense?
66 You are those who argue about that which you have some knowledge: Why then do you argue concerning that which you have no knowledge? Allah knows. You do not know.
67 Ibraheem was not a Jew, nor yet a Christian; but he was an upright man who had surrendered (to Allah), and he was not of the idolaters.
68 Those of mankind who have the best claim to Ibraheem are those who followed him, and this Nabee (Prophet) and those who believe (with him); and Allah is the Protecting Friend of the believers.
[Quran: Al Imran Chapter 3:65-68]

Islam اسلام is the religion of Ibraheem (

) that has been perfected by the arrival of Muhammad

in this world. How was Islam perfected ?

THE BEGINNING OF REVELATION

) appeared in the cave Hira and said Iqra  اقرأ (Read). The first Letter uttered by Jibreel was  Alif ا in the word Iqraa اقرأ (Read).
Muhammad

replied: Ma ana bi qaree “I do not know how to read.” The first Letter uttered by Muhammad

Another way of looking at this is that Ibraheem (

) was on the religion of Islam اسلام . Muhammad

is the direct descendant of Ibraheem (

being the Seal of Messengers, the religion of Islam اسلام had to start with  Alif ا and finish on Meem (م). Ibraheem (

) built the Kaaba in Makkah as the first house and Muhammad

restored it by removing all the idols from it.

THE PERFECTION OF ISLAM اسلام

The perfection of Islam has been recorded in the holy Quran. The holy Quran is the perfection. The Quran is packed with Verses or Signs or Ayats آياتها. Why are the verses referred to as Ayats (signs) آياتها?

Every Ayat آية [verse/sign] in the Quran is perfect. Since Islam اسلام has been perfected by Allah there is no room for another Messenger after Muhammad

THE FIRST AND LAST EXISTENCE

May Allah have Mercy on us all. Ameen.

Darood and Salaam on Muhammad, His Family, and His Companions

NAMES OF ALLAH STARTING WITH THE LETTER ALIF