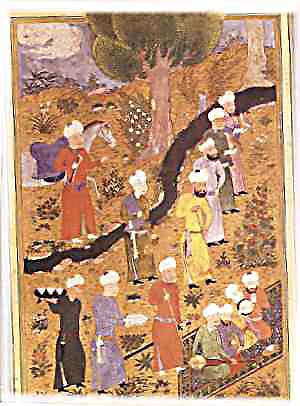 “Is there any place our King is not?
But His sorcery has blindfolded the viewer.
He blindfolds your eyes such that you see a dustmote at midday,
but not the greatest Sun,
A ship at sea, but not the ocean’s waves.
The ship’s bobbing tells you about the sea,
just as the movement of people tells the blind man that it is daytime.
Have you not read the verse, God has set a seal… [2:7] ?
It is God who sets the seal, and it is He who removes it and lifts up the coverings [50:22].

Arif (q) was born in the village of Riwakar six miles from Bukhara and one mile from Ghujdawan. He stood at the door of his Shaikh, Abdul Khaliq, and served him until the Shaikh gave him permission for irshad(giving guidance). He took the Secret of the Order from his Shaikh who witnessed his attainment to the state of perfection. He filled the countries around Bukhara with the scent of his blessings. He opened the minds and the hearts of the people of his time to the secrets of his knowledge.

His students recorded many of his sayings. The following are some of them:

Arif ar-Riwakri (q) died in the same city he was born, Riwakar, and he was buried there. He passed his secret to Shaikh Khwaja Mahmoud al-Anjir al-Faghnawi (q).