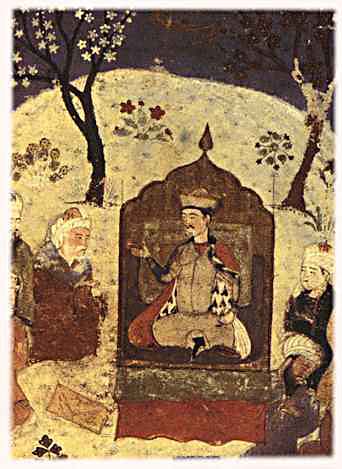 “We have a way from this visible world to the Unseen,
for we are the companions of Religion’s Messenger.
We have a way from the house to the garden,
we are the neighbor of cypress and jasmine.
Every day we come to the garden and see a hundred blossoms.
In order to scatter them among the lovers,
we fill our robes to overflowing.
Behold our words! They are the fragrance of those roses–
we are the rosebush of certainty’s rosegarden.”

Sayyid Amir Kulal is known as the Rose of the Characteristics and Attributes of the Prophet, the Furthest Lote Tree of Desire for the Ultimate Stations, the Owner of the Throne of Guidance, the Attractor of Heavenly Blessings, and the Teacher with his holy breath of the Secrets of the Divine. He is a mujaddid or Renewer of the sharica (Law), a Master of the tariqa (Way), a builder of  haqiqa (Reality), and a guide forkhaliqa (Creation). He was distinguished for mastery among the saints of his time, who applied the following saying to him: “The Saints of Mastery are the Masters of all Saints.”

He was born in the village of Sukhar, two miles from Bukhara. His family were sayyid, descendants of the Holy Prophet

. His mother said, “When I was pregnant with him, whenever my hand went towards doubtful food, I would be unable to convey it to my mouth. This happened to me many times. I knew that I had someone special in my womb. I was careful and chose my food from the best and assuredly halal(lawful) food.”

In his childhood he was a wrestler. He used to practice all of its arts, until he became one of the most famous wrestlers in his time. All the wrestlers would gather around him to learn from him. One day, a man watching him wrestle had the following thought come to his heart: “How is it that a person who is the Descendant of the Prophet

and who is deeply knowledgeable in sharica and tariqat, is practicing this sport?” He immediately fell into a deep sleep and dreamt that it was the Judgement Day. He felt that he was in great difficulty and that he was drowning. Then the shaikh Sayyid Amir al-Kulal appeared to him and rescued him from the water. He woke up and Sayyid Amir al-Kulal (q) looked at him and said, “Did you witness my power in wrestling and my power in intercession?”

One time his shaikh-to-be, Muhammad Baba as-Samasi (q), was passing by his wrestling arena, accompanied by his followers. He stopped and stood there. An evil whisper came to the heart of one of his followers saying, “How is it that the shaikh is standing here in this wrestling arena?” The shaikh looked at his follower immediately and said, “I am standing here for the sake of one person. He is going to be a great Knower. Everyone will come to him for guidance and through him people will reach the highest states of Divine Love and the Divine Presence. My intention is to bring this person under my wing.” At that moment Amir Kulal (q) gazed at him, was attracted and abandoned the sport of wrestling. He followed Shaikh Muhammad Baba As-Samasi to his house. Shaikh Samasi taught him the dhikr and the principles of this most distinguished tariqat and told him, “You are now my son.”

Shaikh Kulal followed Shaikh Samasi for 20 years, spending all his time in dhikr, seclusion, worship, and self-denial. No one saw him in these 20 years except in the company of his shaikh. He would come to see his shaikh in Samas every Monday and Thursday, although the distance was five miles and the journey difficult, until he reached a state of unveiling (mukashafa). At that time his fame began to spread everywhere until he left this world.

Shaikh Sayyid Amir Kulal died in the same village in which he was born, Sukhar, the 8th of Jumada al-Awwal, 772 H.