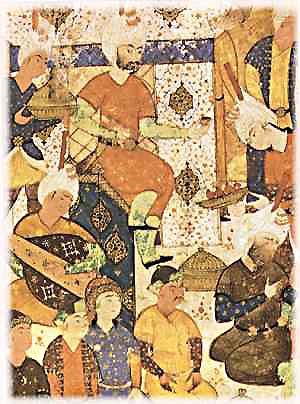 “Hear, O faqir: every time I was lacking something, great or small, and turned away from it in turning towards my Lord, I found it there in front of me, thanks to the power of Him who hears and knows. We see that the needs of ordinary people are filled by paying attention to them, whereas the needs of the elect are filled by the very fact that they turn away from them and concentrate upon God.

“He who by remembering Me is distracted from his petition, will receive more than those who ask” (hadIth qudsI).

He was a descendant of the Prophet

. His light was powered by the Heavenly Station. He poured into the confused hearts of his time, peace and happiness, until he became the Appearance of every Favor and a Means to Allah Almighty and Exalted, for every person in his time. Through him God has renewed the Divine law, sharica and the spiritual reality, haqiqa, like the full moon on a dark night. How many a Sunnah that had been discarded did he revive and how many innovations that had been instigated did he remove?

He was born in 1075 H./1664 AD. He was raised in a blessed house, quenching his thirst for external and internal knowledge at the fountain of the Naqshbandi Order from his early childhood. He received the blessings of his Shaykhs, and they were proud of his progress. He continued to advance his state until, in the country of India, he became a shining Lamp. Visitors came to him from everywhere receiving from him both the blessings of his secrets and the blessings of his ancestors. He sat on the Throne of the  araqat following his master, and he was like a beacon guiding by his light all those seeking in the Way. He left behind him a celebrated name, and how could it be otherwise when the Prophet Muhammad

was his ancestor? He was a Branch of the Tree of Prophetic Knoweldge and a Descendant of the Pure Family of the Prophet

. It is no wonder that he became the Qiblah of the Saints and his threshold became the goal of all people of God.

and the character and good conduct of saints. His strict adherence to the Form and Intent of the Prophet

in all his actions is illustrated by the following incident. One day he entered the bathroom with his right foot, which is contrary to the prescription of the Prophet

. It resulted in his being constipated for three days, because he had strayed from the propriety in the Sunnah in that single step. He asked Allah’s forgiveness, and Allah relieved him of his distress.

He began his life in a state of Self-Effacement. He remained in that state for fifteen years. During this period he was always in the state of Self-Effacement, and he was never out of that state except during the ritual prayers. When he prayed he would return to self-awareness and perform the prayers. He would then return to that state. He was careful to eat only from earnings made by the sweat of his brow. He ate only bread he baked himself, and he ate it only in very small pieces. He spent all his time in meditation and contemplation. When the bread was finished, he would return to prepare more, then he would return to contemplation and meditation. From his excessive contemplation, his back became bowed. He was in the service of his Shaykh for many years. He also served Shaykh Muhammad Muhsin, son of the great narrator of hadith of his time, Shaykh cAbdul Haqq, one of the khalifs of Muhammad Macsum (q), until by means of his service, he reached a high state of perfection.

If he borrowed a book he would read it in three days, because he said, “The reflection of the darkness and ignorance of the owner of the book will be reflected on me.” He was very careful in such matters. His khalif, Sayyidina Habibullah (q), used to cry when he remembered him, and he would say to his followers , “You did not see that holy person. If you had been in his time it would have renewed your faith in Allah’s power that He had created such a person.”

Sayyidina H abibullah also used to say, “Shaykh Nur Muhammad al-Badawani’s visions were extremely detailed and incredibly precise. He used to see with his heart better than anyone can see with his eyes. He told me one time when I was in his presence, ‘O my son I see in you the traces of adultery. What have you done today?’ I said, ‘O my Shaykh when I was coming to you my eyes saw a woman on the street.’ He said, ‘Next time take care to protect your eyes.'”

Shaykh Habibullah said, “One time as I was on my way to the Shaykh, I saw an alcoholic on the street. When I came to the Shaykh he told me, ‘I am seeing in you the traces of alcohol.’ I realized from this that everything in this life is reflected from one person to another, and the character of one person is reflected on another. That is why we have to keep ourselves very clean at all times, and always keep company with the people of Allah.

Shaykh Habibullah said, “One day a lady came to him and said, ‘O my Shaykh, a spiritual being (jinn) kidnapped my daughter and I have tried by every means to get her back, but it has been to no avail.’ He meditated on that matter for about an hour. Then he said, ‘Your daughter will come tomorrow around the time of afternoon prayers, so now go and rest.’ The lady said, ‘I was so eager for that time to come, and for my daughter to appear, that I could hardly rest. At the exact time the Shaykh had mentioned, I heard a knock at the door, and in walked my daughter. I asked her what had happened. She said, ‘I had been kidnapped and taken to the desert by a jinn. I was there in the desert and just now a Shaykh came and took me by the hand and brought me here.'”