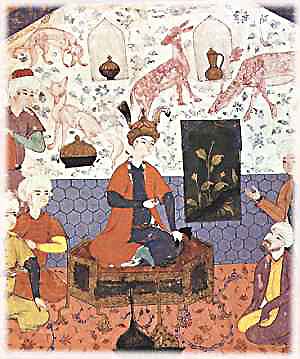 “It is not my part, if trials come my way, to turn away from them,
Nor, if I am flooded with joy, to abandon myself to it;
For I am not of those who, for the loss of one thing, are consoled
By another; I wish nothing less than the All.”

He is the Ghawth (Arch-Intercessor) of the Famous Saints and the Blessing of the Scholars of Islam. He is the Dawn and the Light of both the East and the West. He is the Master of the Kingdom of Guidance. He grew up in the house of his uncle who taught him the best manners, educated him in spiritual and religious knowledge, and nursed him from the fount of morality and ethics. He quenched his thirst with the Heavenly Realities and Unseen Knowledge, until his heart became a House of Revelation, as Allah said in the Holy  Hadith, “Neither my heaven nor my earth could contain Me, but the heart of my Believing Servant contained Me.”

He was known in his time as Darwish Wali. He grasped all kinds of understandings of the Religion and he was able to erase the mischief and the misguidance of many of the false teachers of his time. He revived languishing hearts and he mended broken hearts, until he became the blessing of his time and the Human Essence of Guidance. He had many followers throughout the country. His house and his mosque were filled with visitors asking and seeking his guidance.

One time after an association he had just held with him and other murids, Shaykh Muhammad az-Zahid told him to go up a certain hill at some distance and wait for him there. The Shaykh told him he would be coming later. Darwish Muhammad was so obedient to his Shaykh that he surrendered his will to him completely. His conduct was perfect. He went and waited for the Shaykh to come, without using his mind to ask: “how shall I go there, what shall I do when I get there, etc.” He moved immediately. He arrived and began to wait. The time for afternoon prayers came and the Shaykh did not show up. Then the sun set. His ego was telling him, “Your Shaykh isn’t coming; you have to go back. Maybe the Shaykh forgot.” His truthful belief, however, told him: “O Darwish Muhammad, believe in your Shaykh and believe that he is certainly coming, as he said. You have to wait.”

How was Darwish Muhammad’s heart to believe his ego when his heart was being lifted up to be with his Shaykh? He braced up and waited. Night came and it was very cold on the hill. He was freezing. He spent all night awake and his only source of warmth was his dhikr of “la ilaha illallah”. Dawn came and the Shaykh had still not shown up. He was hungry and started looking for something to eat. He found some fruit trees, ate, and kept waiting for the Shaykh. The day went, and then the next day. He was again in a big struggle with his ego, but he kept thinking: “If my Shaykh is a real Shaykh, he knows what he is doing.”

A week went and then a month. The Shaykh was not coming. The only distraction Darwish Muhammad had from waiting was dhikrullah, and his daily prayers were his only other activity. He kept on only until the power of his dhikr made the animals come and sit around him to make dhikr with him. He realized that this miraculous power had come to him from his Shaykh.

Winter came and the Shaykh didn’t come. It began to snow. It was extremely cold and there was no more food. He began to cut the bark of the trees and feed himself on the moisture inside, and from roots and whatever green leaves he could find. Deer came to him and he began to milk the ewes. This was another miracle which appeared to him. The ewe did not move when he milked her, and another came. He was being lifted up to higher and higher spiritual levels, and his teacher was sending him spiritual knowledge through these miracles and visions. Khidr

was appearing to him and teaching him.

A year passed, then another, then a third, and then the fourth year. The Shaykh was not coming, and Darwish Muhammad was ascending to a higher and higher states of patience (sabr). He kept thinking, “My Shaykh knows.” At the end of the seventh year he began to smell the fragrance of his Shaykh filling all the air around him. He ran to meet the Shaykh with all his wild animal companions in his train. He was completely covered with hair.

Shaykh Muhammad az-Zahid arrived. When Darwish Muhammad saw him, he felt intense joy in his heart, and immense love for his Shaykh. He ran to him and kissed his Shaykh’s hand, as he was crying out: “Salamu `alaikum, O my Shaykh! How I love you, O my Shaykh!”

His Shaykh said: “What are you doing here? Why did you not come down?” He said, “O my Shaykh, you said to come here and wait for you, so I waited for you.” The Shaykh said: “What if I died, or perhaps I forgot?” Darwish Muhammad said, “O My Shaykh, how are you going to forget when you are the representative of the Prophet

?” He said, “What if something had happened to me?” Darwish Muhammad said, “O my Shaykh, if I had not stayed here and waited for you and obeyed, you would have never come to me by permission of the Prophet

!” Darwish Muhammad had detected in his heart that his Shaykh was coming by the order of the Prophet

The Shaykh laughed and said: “Come with me.” At that moment he poured to him the secret and the power of this Golden Chain of the Naqshbandi order that he had in his heart. He then ordered him to be the Shaykh of the murids. Darwish Muhammad remained in his Shaykh’s service until Shaykh Muhammad az-Zahid passed away.

Darwish Muhammad died on the 19th of Muharram, 970 H. He passed the secret of the Order to his son, Muhammad Khwaja al-Amkanaki (q).