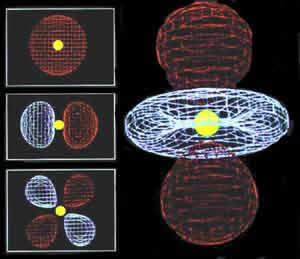 His Oceans of Power

Everything Around You is an Atom in the  Ocean of Power

The Structure Of The Atom/Adam – Part 1

Taken from the Teaching of Mawlana Shaykh Hisham Al Kabbani

سَنُرِ‌يهِمْ آيَاتِنَا فِي الْآفَاقِ وَفِي أَنفُسِهِمْ حَتَّىٰ يَتَبَيَّنَ لَهُمْ أَنَّهُ الْحَقُّ ۗ أَوَلَمْ يَكْفِ بِرَ‌بِّكَ أَنَّهُ عَلَىٰ كُلِّ شَيْءٍ شَهِيدٌ ٥٣
41:53 “
Soon will We show them our Signs in the (furthest) regions (of the earth), and in their own souls, until it becomes manifest to them that this is the Truth. Is it not enough that thy Lord doth witness all things?…” (Surat Fussilat [Explained in Detail] 41:53)

Air, water, mountains, animals, plants, your body, the chair on which you sit; in short, everything you see, touch, and feel, from the heaviest to the lightest is formed of atoms.  [See Visualization of Macro – Micro Universe Looping]

First Step in Annihilation to the Muhammadan Reality is to realize that We are so insignificant; just a  Dot in the Oceans of Power Under the Ba (ب).

It is not possible for a human being to visualize this size. Therefore, let us try to explain it with an example:

Think that you have a key in your hand.

Let us give another example to comprehend this minuteness and how everywhere and everything is full of atoms:

Let us suppose that we want to count all the atoms in a single grain of salt and let us assume that we are able to count one billion (1,000,000,000) atoms per second.

What, then is there inside such a small structure?

In this chapter, we will look at the extraordinary structure of the atom that constitutes the basis of everything animate and inanimate, and see how the atoms combine to form molecules and ultimately, matter.

The Power Hidden In the Nucleus

Yet there is one thing even more surprising than that:

The reason is that the density comprising the mass of the atom is not distributed evenly throughout the whole atom.

We had noted that this force, the most powerful of the forces in nature, keeps the nucleus of an atom intact and keeps it from fragmenting.

To sum up, there are two great forces interacting with each other, inside an atom so small as to be unseen to us.

When we consider the size of the atom and the number of atoms in the universe, it is impossible to fail to notice that there is tremendous equilibrium and design at work.

The Space In the Atom

As mentioned previously, the greater part of an atom consists of space. This makes everyone think of the same question:

Why is there such space?

There is a great space lying between the basic particles.
[We are all in one ocean of Atoms all Spinning and never colliding]

At this point, we realize that there is a similarity between the largest and the smallest spaces known in the universe.

When we turn our eyes to the stars, there again we see a void similar to that in the atoms.

Inside the Nucleus: Protons and Neutrons

Until 1932, it was thought that the nucleus only consisted of protons and electrons.

Source of the Diversity In the Universe

It is the number of protons in the nuclei of the atoms that principally differentiates the elements from each other.

The Borderline of Physical Existence: the Quarks

Until 20 years ago, it was believed that the smallest particles making up the atoms were protons and neutrons.

Research is underway in the field of “Particle Physics” to unravel the world of sub-atomic particles.

What lies beyond this limit?

Today, scientists propound various hypotheses on this subject, but as mentioned above, this limit is the furthest point hitherto reached in the material universe.

Man has just started to become aware of the perfect mechanism functioning without fail in the organs and systems in his own body.

The Other Aspect of the Atoms: Electrons

Tens of electrons revolving in an area so small as to be invisible even to the most powerful microscopes create a very complex traffic inside the atom.

لَا الشَّمْسُ يَنبَغِي لَهَا أَن تُدْرِ‌كَ الْقَمَرَ‌ وَلَا اللَّيْلُ سَابِقُ النَّهَارِ‌ ۚ وَكُلٌّ فِي فَلَكٍ يَسْبَحُونَ ٤٠
36:40 It is not permitted to the Sun to catch up the Moon, nor can the Night outstrip the Day: Each (just) swims along in (its own) orbit (according to Law).
(Holy Quran YaSeen: 36:40)

Electrons are small particles, almost two thousandth the size of neutrons and protons.

The electric charge they carry obliges electrons to obey certain laws of physics.

First, under normal circumstances, the electrons, all negatively charged, would be expected to repel each other by obeying this rule and shoot away from the nucleus.

However, none of these things occur.

In addition to these factors, if the nuclear forces binding protons and neutrons in the nucleus to each other did not exist, protons having equal charges could not even come close to each other, much less bond together in a nucleus.

All these fine calculations are indications that even a single atom is not idle but acts under the perfect control of Allah.

Yet, as mentioned in the introductory part of the book, no one has given a thought to the question “Why?”

Scientists were desperate in the face of all these questions because all they can do is guess at the order in which the events take place. Their research, however, gave rise to an indisputable reality. Every point in the universe reveals the intervention of an Owner of intellect and Will Who does not leave even a single atom idle. There is a single power that holds all forces together in harmony, and that is Allah; Who holds all the power and might. Allah manifests His might wherever He wills, whenever He wills. The entire universe from the smallest atom to the endless galaxies is able to continue its existence only by Allah’s will and preservation.

In the Qur’an, Allah states that there is no power but Him and He announces the punishment of those who, unaware of this, assume that the powerless beings (animate or inanimate) He created have power and strength independently of Him, and attribute divine characteristics to them.

So far no scientist has yet been able to explain the cause and source of the forces in the atom and therefore in the universe, and why certain forces come into play on certain occasions. What science does is only to make observations, take measurements and designate “names” for them.

Such “namings” are regarded as great discoveries in the world of science. In fact, what scientists do is not an attempt to form a new equilibrium in the universe or build a new system but just an effort to comprehend and unravel the secret of the evident equilibrium in the cosmos.

In this case, the one who really should be honored is, without doubt, Allah, the Most Gracious, the Most Merciful, Who brought that system into being when it was not, furnished it with exceedingly delicate balances, and endlessly creates extraordinary miracles the like of them.

أَلَا إِنَّ أَوْلِيَاءَ اللَّـهِ لَا خَوْفٌ عَلَيْهِمْ وَلَا هُمْ يَحْزَنُونَ ٦٢
10:6 “In the alternation of night and day and what Allah has created in the heavens and the earth there are Signs for people who fear Him.” (Surah Yunus (Jonah) 10:6)

There are 7 [7 Levels of Heart] electron shells around the nucleus of the atom.

7 Openings of The Face, Crown of Creation

That the endless number of electron shells of atoms making up the universe precisely stick to the same number by obeying the 2n2 formula indicates order.

الشَّمْسُ وَالْقَمَرُ‌ بِحُسْبَانٍ ٥
The sun and the moon both run with precision. (Surat ar Rahman 55:5)

Understanding The Divine Government and Lordship