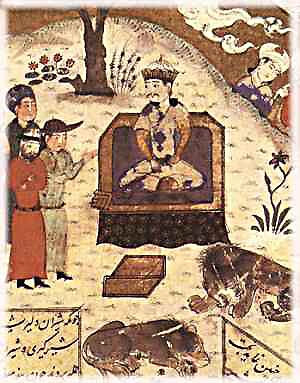 “I spoke about Myself.
Those who heard me said: ‘See how he boasts!’
How could I compare the Real to the other-than-Real,
When one drop, one atom of Him fills the two worlds?
The part is the All, and the All is here.
In Him the two worlds are lost–the soul
and the one she quickens.
There is the Sun, here, the ray.
Whoever saw a ray separated from the Sun?
The sufi is entirely there, only his trace is here.
And the trace is never separated from the All.”

He was an Imam of Spiritual Power. He was one of the Masters of Sufism. He was the Owner of the Throne of Guidance, and the Focus of Divine Outpouring. He was a Tower of the Unseen Secrets of the Divine Essence. Through him mankind was guided on the Path of Heavenly Knowledge and by means of him they became distinguished. He was a beacon for his time. He was the Imam for whose elevated knowledge the people bore witness. In his century he was the Sufi to whom all eyes turned.

Shaykh Isma`il ash-Shirwani (q) was the one to bring the Naqshbandi Order to Daghestan. He was the one to establish jihad against the cruel Russian occupation and to revive the religion of Islam in his country after it had been almost eradicated.

He was born on a Tuesday, the 7th of Dhul-Qi`da of the year 1201 H./1787 CE. in Kurdemir, in the District of Shirwan of Daghestan, in Caucasia. He had a very strong and well-built body and he was tall. He had a very light complexion. His eyes and beard were black. He had a high-pitched voice.

He received his education in Daghestan through his father, who was one of the greatest scholars of his time, ash-Shaykh Anwar ash-Shirwani. He educated young Isma`il in the memorization of Qur’an, which Isma`il memorized entirely by the age of seven. He then spent time memorizing the seven different readings. At the age of nine he began learning Jurisprudence and the Science of Prophetic Narrations from Shaykh Abdur Rahman ad-Daghestani. At that young age, he was able to give the evidences from Qur’an and Hadith for almost any question of fiqh (jurisprudence).

One day he was struck by a powerful Heavenly influence which made him lose awareness of himself completely and brought him into a State of Self-Effacement. This state, in which he was lost to himself, impelled him to wander in search of the Reality he could see in his heart. Then one day he had a vision, in which a voice told him, “You must direct yourself towards Delhi, where you will learn from it scholars and its Shaykhs. Allah May grant you the good fortune to meet with the successors of Shaykh `Abdullah ad-Dahlawi.”

That vision kept appearing to him, until he reached the age of seventeen. He said to his father, “I want to go become one of the followers of `Abdullah ad-Dahlawi.” His father was very fearful to let him go to such a far-off country, but he finally relented and gave permission for his son to travel. Isma`il set out on foot for Delhi, walking day and night without conveyance. He took one year to reach Sayyidina `Abdullah ad-Dahlawi (q) in Delhi.

When Mawlana Khalid returned to his country of Sham in 1225 H., Shaykh Isma`il ash-Shirwani went back to Daghestan to say farewell to his parents. On his journey back to Daghestan he stopped in a city where he found the people standing in the desert with their hands raised in du`a, asking Allah to send them rain. They had not seen rain for a whole year. When they saw him and glimpsed the piety in his face, they asked him, “Can you ask Allah to shower rain on us.” He raised his hands in du`a. The clouds gathered and the wind began to blow. It started to rain and continued to rain for seven days without stopping.

When he reached Daghestan, he asked his parents’ permission to move to Greater Syria (Sham ash-Sharif). However, he stayed in Daghestan for a long period of time. While he was there people came to him constantly to learn from his teachings.

“If a person devotes himself to Allah, Almighty and Exalted, the first benefit he will receive will be that he will no longer be in need of people.”

“The sweet smell of the lovers of God will arise from them and spread. Even if they try to conceal it they will not be able to, wherever they come from and to whereever they go.”

“Whoever hears wisdom and does not apply it is a hypocrite.”

“The company of the heretics is an illness and the medicine for it is to leave them.”

“Allah, Almighty and Exalted, has said that whoever is patient with Us will reach Us.”

“Allah expresses familiarity with His Servants by means of showing them His saints.”

“Sufism is Purity, it is not a description. It is a Truth without an end, like a river of red roses.”

“Tasawwuf is to walk with the Secrets of Allah.”

“Whoever prefers the company of the rich over that of the poor, Allah will make his heart to be dead.”

“For the Knower there is a time when the Light of Knowledge will shine on him. It makes him see the Wonders of the Unseen.”

“Whoever proclaimed he is Hearing, and yet he doesn’t hear the Dhikr of the birds and the sounds of the wood and the applause of the wind, is a liar.”

He was asked about human beings. He said, “There are four kinds of people and ghosts. On them Allah’s Will is pouring forth.”

He spent many years in Daghestan. Then he had a vision in which Shaykh `Abdullah ad-Dahlawi (q) ordered him to move to Sham and to stay there and serve Shaykh Khalid al-Baghdadi (q). He traveled to Sham walking from Daghestan to Kuman, from Kuman to Azerbaijan and on to Tiflis. From there he went to Tabriz, then to Amad, Aleppo, Hama, and Homs. He finally arrived in Damascus, the center of Syria, after one year of travel.

In Syria, he immediately went to meet his Shaykh. From Marja in the city center where he had arrived, there was no easy way to go up the mountain, which overlooks all of Damascus, where his Shaykh’s Khaniqawas located. He walked from Marja to that mountain in two hours, until he arrived at his Shaykh’s door. As he entered his Shaykh was waiting for him. He said, “We received the news of your arrival. Welcome.”

Shaykh Khalid immediately placed him in seclusion for a long period of time. In that seclusion he taught him what he needed in order to reach perfection, then he gave him the power of this Tariqat. He ordered all his followers to listen to him. He said,

“This is my Khalif. He is like the dome of a mosque, the dome of the Mosque of the Prophet

. From him the secret of this tariqat is going to spread back to Daghestan. From there I can see its light shining forth through seven generations of Shaykhs. Every one of these seven Shaykhs will represent the highest powers of the Divine Presence. Through them there will be great support against the army of Ignorance which is going to overwhelm the area of Daghestan.”

“From among the people of Daghestan there will be one warrior who will be living in the time of three great Shaykhs of this tariqat and he will be supported by them. He will lead the fight against this army of Ignorance.” Then he said to his followers: “Shaykh Isma`il ash-Shirwani is the best of all scholars in this time, and I raised him up to be one of the perfected saints. He will guide you and guide everyone after me. He is going to be the Knower that spreads the secret of this Tariqat another time in the territories of the Caucasus. This Imam is going to be the First to sit on my Throne and he is going to be the Trustee of whatever I have, to spend in Allah’s Way. And his duty is to look after my children.”

Shaykh Isma`il served his Shaykh and kept his company. He travelled with him and lived with him in his house for fifteen years. He was given the Absolute Khilafa and he was given permission to guide seekers,al-irshad. He directed people to the best of his knowledge, until his fame spread throughout Sham, Iraq, Persia, Armenia, Turkey, reaching the land of Daghestan.

Shaykh Khalid assigned him to teach and train people in the Mosque of Al-Addas in Damascus. He used