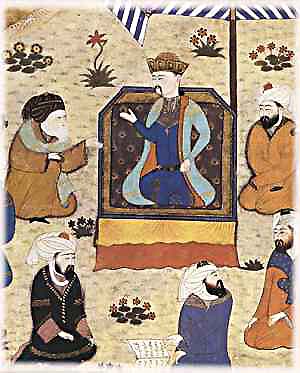 He was the Wisest Scholar of his time, Adorned with the Arts of Science, dressed in the Robes of Piety and Patience, enlightened with the Essence of Certainty and supported with the Firmness of Faith. He knew Truth from Falsehood. He was Unsurpassed in Eloquence and Clarification. He was a Master of This Way and the First in this Association (Jama`at). He was the Champion of the Knowers and the Signpost for the Seekers.

His speeches were exemplary and exquisite in their eloquence. His proofs and examples were metaphors that clarified elevated concepts to make them accessible to the people. All were overwhelmed by his eloquence. If he passed through a city in Daghestan, the people would line the streets to see him. Writers used to attend his association for the sake of his eloquent literary language, jurists for his legal rulings, philosophers for his logic, speakers for his clarity, and Sufis for his Manifestation of the Truth.

He was tall and very fair. His beard was of mixed color, black and white. His eyes were black. His voice was high-pitched.

He was one of the Pious, Prayerful Jurists. He followed and taught the Shafi`i School. He memorized Shafi`i’s “Kitab ul-Umm” (The Mother of Books). He was able to give judicial decisions (fatawa) at the age of twenty years. He was respected by all in his city. He received his first teachings in Tasawwuf from his family.

He said, “Our Way is controlled by the Qur’an and the Sunnah.”

“I have met, from the Naqshbandi Order, four types of saints, and of each type, thirty exemplars; but in the end I chose to follow Shaikh Isma`il ash-Shirwani.”

“Allah didn’t send anything to this Earth except as a lesson for His servants to learn from.”

They asked him, “Who is the Knower?” He answered, “The Knower is the one who knows your secret without your speaking.”

He said, “We didn’t take Sufism through speeches and flashy words or by saying, ‘Our shaikh said this and our shaikh said that.’ We took Sufism by being hungry and leaving dunya behind and by disconnecting ourselves from everyone.”

“Sincerity between Allah and His Servants is not witnessed by anyone, neither the angels to write it, nor the devil to corrupt it, nor desire to destroy it.”

“Even the Trustworthy (Siddiq) changes his opinion more than forty times during a single night, although he is Trustworthy. The Witness (al-Mushahid) is firm in his view for forty years.”

He said, “A person cannot be called a wise servant until nothing appears in him that Allah dislikes.”

“The Naqshbandi Sufi Order is based on four characteristics of behavior: -don’t speak except when asked; -don’t eat except when weak with hunger; -don’t sleep except when overcome by fatigue; -and don’t keep quiet when you are in His Presence (i.e. ask incessantly from Allah).”

“The speech of Prophet

is from the Divine Presence and the speech of Sufis is from Witnessing (mushahada).”

“The way of the Sufis to Allah is by struggle against their selves.”

“The State of Unique and Sincere Oneness is reached when the servant goes back from the End to the Beginning, and he becomes as he was before he existed.”

“The knowledge of Oneness (tawhid) has been veiled from the eyes of the External Scholars since long ago. They can only talk about its outer shape.”

“What causes the heart to feel happiness and peace when it hears a beautiful sound? It is a consequence of Allah’s having spoken to the spirits when they were atoms in His Presence and having asked them, ‘Am I not Your Lord?’ The sweetness of His Speech became imprinted on them. Thus in this world, whenever the heart hears anything of Dhikr or music, it experiences happiness and peace, because these are a reflection of that sweetness.”

For twenty years he did not eat except once a week. His daily practice of remembrance (wird) consisted of 350 rak`ats of prayer.

Shaikh Ahmad al-Kawkasi said, “One time I was travelling from the city across the forest to another city on important business. On my way snow was falling heavily, and a great wind was blowing. Then the snowfall cleared, and in its stead rain poured down, making all the roads like rivers. I had no choice but to pass through that forest. I entered the forest as night was approaching and got lost in the middle. The skies were pouring rain, night was overtaking me, the flood was increasing, and I didn’t know where to go. I came to a river running through the woods. The flood made that river like an ocean, full of waves. The bridge over it was wrecked, but I had to cross. The river was raging, rising higher and higher, until it reached up to my legs, and then reached up the legs of my horse. I feared drowning for myself and my horse. I raised my hands and asked my Lord, “O Allah, help me in this difficulty.” Immediately I heard a voice behind me saying, “O Ahmad, why are you calling me and bringing me from my house?” I looked and I saw Shaikh Khas Muhammad behind me, but he was huge. He said, “Hold my hand and cross the river with me.” I felt fear. He said, “When you are with Us you must not feel fear.” Then we crossed the river. He walked on the river, and I was walking with him on the water. We crossed to the other side. He said, “Now you are safe,” and he disappeared. When I reached my destination and went to the mosque, I saw him sitting there. I asked him, “How did you come?” He said, “O Ahmad, for Us there are no boundaries. We can be anywhere and everywhere at any time.”

Benningsen and Wimbush describe the influence of Shaikh Isma`il ash-Shirwani and his khalifs in Daghestan thus: “The Naqshbandiya tariqat was to play a very important role in Caucasian history. Iron discipline, total dedication to its ideals, and the strict hierarchy on which it was based explain the epic resistance of the Caucasian mountaineers to Russian conquest – -a resistance that lasted from 1824 to 1855– in which not only all the leaders of the movement but also the local authorities (na’ibs) and the majority of the fighters were Naqshbandis. It can be said that the nearly fifty-year-long Caucasian wars made an important contribution to the material and moral ruin of the Tsarist empire and hastened the downfall of the Russian monarchy. “The brotherhood achieved another deep and long-lasting result: it transformed the half-pagan mountaineers into strict orthodox Muslims, and introduced Islam into the animist areas of upper Chechnia and among the Circassian tribes of the western Caucasus.”… “The subsequent massive migration of the Caucasian Muslims to Turkey did not destroy the Naqshbandiyya in Daghestan and Chechnia; its roots had spread too wide and too deep.”

Khas Muhammad died on the 3rd of Ramadan, a Sunday, in the year 1260 H. / 1844 C.E. while returning to Daghestan from pilgrimage to Makkah. He was buried in Damascus. He passed the authority of the Tariqat to his successor, Sayyiddina ash-Shaikh Muhammad Effendi al-Yaraghi (q), according to the will of their common shaikh, Sayyidina Isma`il ash-Shirwani (q).