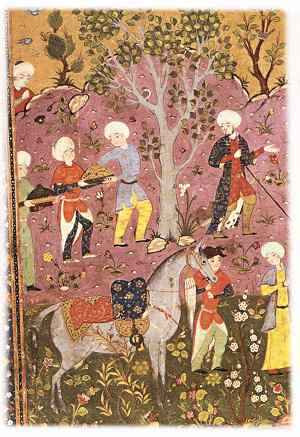 “If I repeat Your Name, it is not because I fear forgetfulness,
But the mention of it on my tongue is the happiness of dhikr.”

He was a Master from whose heart the Water of Knowledge and Wisdom gushed forth. His heart was polished by the Divine Effulgence, making him one of the best of the Chosen Ones, purified from all darkness and misery, and translucent as crystal.

He was born in the village of Anjir Faghna, three miles from Bukhara. In his youth he used to work in construction. He devoted his life to the guidance of people to Allah’s Presence. He was the first in the line of the Masters of Wisdom (Khwajagan) to introduce the method of loud dhikr in accordance with the needs of the time and as required by the conditions of the seekers. When he was asked why he used the loud dhikr, he replied, “To awaken the sleeper.”

The Controversy on Loud Dhikr

One day Khwaja Mahmoud attended a scholarly gathering and Shaikh Shams al-Halwani said to the Shaikh Hafiz ad-Din, an authority in external knowledge, to ask Shaikh Mahmad Faghnawi why he was doing loud dhikr. Shaikh Mahmoud Faghnawi said, “it is the best dhikr to awaken an outsider from his state of slumber and to attract the attention of the heedless so that he direct himself towards Allah following the shaikh who is making dhikr, straighten himself on the Way, and make his repentance to Allah a pure one, which is the key to all good and happiness. If your intention is correct you will find the authority to use the loud dhikr.”

Shaikh Hafiz ad-Din asked him to clarify to him just who is permitted and allowed to practice the loud dhikr, in order to justify the practice to those who opposed it. He said “the loud dhikr is for anyone who wishes to reach the state of purifying his tongue from lying and backbiting, and free his private actions from committing what is forbidden, and clean his heart from pride and the love of fame.”

One day the Shaikh Ali Ramitani (q), said that a man saw Khidr

and asked him, “Tell me where I can find someone that is keeping the sharica of the Prophet

and the Straight Path, in order that I may follow him.” He said, “that one whom you are seeking is Shaikh Mahmad al-Anjir al-Faghnawi.”

Shaikh Mahmoud radiated his knowledge from his masjid, which he built in the village of Wabiqni, close to Bukhara. He passed away in the village of Qilit, near Bukhara, on the 17th of Rabi’ul Awwal, in the year 717 H. He passed the secret of the Naqshbandi Sufi Order to his khalif, Ali ar-Ramitani (q).