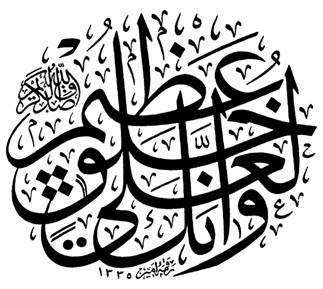 4. Qasim ibn Muhammad ibn Abu Bakr as-Siddiq  ² was one of the seven most famous jurists in Madinah, being the most knowledgeable among them. When he approached death it is related that the Kabah said, “O Qasim! I am going to miss you and I am not going to see you again in this dunya.” Then the Kabah made five hundred circumambulations around Qasim out of respect for him. 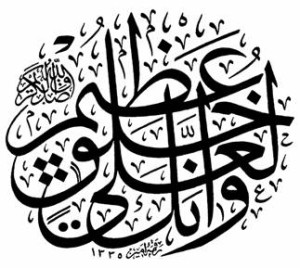 So long as you have not contemplated the Creator,

You belong to created beings.

But when you have contemplated Him,

Created beings belong to you. 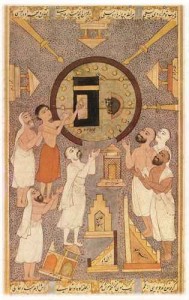 It is narrated that he said, “My grandfather, Abu Bakr as-Siddiq ², was alone with the Prophet (s) in the Cave of THAWR during migration from Makkah to Madinah, and the Prophet said to him, ‘You have been with me all your life and you have carried all sorts of difficulties. And now I want you to make a supplication to invoke God’s favor on you.’ Abu Bakr then said, ‘O Prophet of God, you are the secret of my soul and the secret of my heart. You know better what I need.’”

The first answer to that supplication and the first one to receive that blessing was Sayyidina Qasim (as). In his time he was known in Madina as Abu Muhammad. People came to listen to his guidance, his lectures (suhbah) and his disclosures of the hidden meanings of the Quran. Qasim ibn Muhammad ibn Abu Bakr as-Siddiq was one of the seven most famous jurists in Madinah, being the most knowledgeable among them. It was through these seven great Imams that the Traditions, early jurisprudence, and Quranic commentaries were disseminated to the people.

He met some of the Successors of the Companions, including Salim ibn Abd Allah ibn Umar  ².

Abd ar-Rahman ibn Abi Zannad  said that his father said, “I did not see anyone who knew the Sunnahbetter than al-Qasim.”

Abu Nuaym said of him in his book Hilyat al-Awliya: “He was able to extract the deepest juristic rulings and he was supreme in manners and ethics.”

Imam Malik  narrated that Umar ibn Abd al-Aziz  , considered the fifth rightly-guided caliph, said, “If it were in my hands, I would have made al-Qasim (as) the caliph in my time.”

Sufyan said, “Some people came to al-Qasim with charity which he distributed. After he distributed it, he went to pray. While he was praying, the people began to speak negatively about him. His son said to them, ‘You are speaking behind the back of a man who distributed your charity and did not take one dirham from it for himself.’ Quickly his father scolded him saying, ‘Do not speak, but keep quiet.’” He wanted to teach his son not to defend him, as his only desire was to please God. He had no concern for the opinion of people.

Yahya ibn Sayyid said, “We never found, in our time in Madinah, anyone better than al-Qasim.” Ayyub as-Saqityani  said, “I have not seen anyone better than Imam Qasim. He left 100,000  dinars behind for the poor when he passed away, and it was all from his lawful earnings.”

One of His Miracles

The year in which Abu Muhammad Qasim (as) was to leave this world, he set out on the pilgrimage  on the third of Ramadan. When he arrived at al-Qudayd, where pilgrims usually sojourn, God opened to his vision to behold angels descending from heaven and ascending in countless numbers. They would come down, visit the place, and then go back up. And while he watched these angels carrying the blessings with which God was sending them, it was as if that light and concentrated power was being poured into his heart directly, filling it with sincerity and God-consciousness.

As soon as this vision occurred, he fell asleep. In a dream he saw Abu Bakr as-Siddiq  coming to him. He said, “O my grandfather, who are these heavenly beings that are descending and ascending and who have filled my heart with God-consciousness?”

Abu Bakr as-Siddiq  answered, “Those angels you see ascending and descending have been assigned to your grave by God the Most High. They are constantly visiting it. They are obtaining blessings from where your body is going to be buried in the earth. To reverence you, God ordered them to come down and to solicit blessings for you. O my grandson, don’t be heedless about your death; it is coming soon. You are going to leave this world and be raised to the Divine Presence.”

Qasim (as) immediately opened his eyes  and saw his grandfather before him. He said, “I just saw you in a dream.” Abu Bakr as-Siddiq replied, “Yes, I was ordered to meet you.” “That means I am about to leave this world,” said Qasim (as). “Yes, you are going to leave the world and accompany us to the hereafter,” said our master Abu Bakr as-Siddiq .

“What kind of deed do you advise me to do in my last moments on earth?” Qasim (as) asked his grandfather. Abu Bakr as-Siddiq (ra) answered, “O my son, keep your tongue moist with dhikr Allah and keep your heart ready and present with dhikr Allah. That is the best you can ever achieve in this world.”

Then Abu Bakr t disappeared and Qasim (as) began dhikr on his tongue and in his heart. He continued his journey to Makkah where he stayed until the time of Hajj. Then he witnessed the standing at Arafah (which occurs each year on the 9th of Dhul-Hijja). In that year many saints, both men and women, were spiritually present at Arafah, and Qasim bin Muhammad bin Abu Bakr as-Siddiq (ra) met with them.

As they were standing, they all heard the Plain of Arafah and its mountain crying mournfully. They asked Mount Arafah, “Why are you crying this way?” and Mount Arafah replied, “I and all the angels are crying, because today this earth is going to lose one of its pillars.”

They asked, “Who is that pillar that the earth is about to lose?” Mount Arafah replied, “Abu Muhammad Qasim is going to leave this world, and the world will no longer be honored with his steps, and I will no longer see him on my plain, where all pilgrims come, and I will miss him. That is why I am crying in this way. Not only from myself, but his grandfather Muhammad, and his grandfather Abu Bakr, and his grandfather Ali, and the whole world is crying. They say the death of a scholar is the death of the world.”

At that moment the Prophet (s) and Abu Bakr as-Siddiq (ra) were spiritually present on Arafah, where they were crying. Prophet (s) said, “With the death of Qasim great corruption will appear on earth, for he was one of the pillars able to prevent it.”

Previously, that mournful crying of Mount Arafah only occurred when the Prophet (s) passed away from this world, then when Abu Bakr passed, then when Salman passed, and when Qasim (as) passed. One of the saints, Rabia al-Adawiyya, met Qasim (as) in the spiritual assembly of saints and he said, “Every dry thing and living thing, I heard them crying. Why, Oh Rabia, did this happen? I never experienced such crying in my life. Do you know its cause?” She replied, “O Abu Muhammad, I also was not able to discern the nature of that crying, so you must ask your grandfather, Abu Bakr.”

Abu Bakr  appeared to them spiritually saying, “That crying from every point on this earth is because you are leaving this worldly life, as I informed you on your pilgrimage.” Then Qasim (as) raised his hands and prayed to God, “Since I am passing away from this life now, forgive whoever stood with me on Mount Arafah.” Then they heard a voice saying, “For your sake, God has forgiven whoever stood with you on Mount Arafah on this Hajj.” At that moment God revealed to Qasim’s heart unlimited Gnostic knowledge.

At that moment Qasimt  left Mount Arafah and arrived at Makkah al-Mukarrama, at the Kabah . There he heard the sound of crying coming from the House of God and it kept increasing as he approached, until everyone could hear it. That was the voice of the Kabah, crying for the passing of Qasim (as) from this world. At the same time a flood of tears poured forth from the Kabah, flooding the entire area with water.

The House of God said, “O Qasim! I am going to miss you for I will never again see you in this world.” Then the House of God made five hundred circumambulations around Qasim (as) out of respect for him.

It must be known that whenever a saint visits the Kabah and greets it, the Kabah responds to that greetings saying, “Wa alayka as-salam ya wali-Allah,” “and upon you be peace, O friend of God.”

Then Qasim (as) said farewell to the Hajar al-Aswad (Black Stone), then to Jannat al-Mualla, the cemetery in which Khadija al-Kubra , first wife of the Prophet (s), is buried, and then to all of Makkah. He then left and went to al-Qudayd, a place between Makkah and Madinah, on the 9th of Muharram , where he passed on to the next life. The year was 108 (or 109) AH/726 CE, and he was seventy years old. He passed the secret of the Naqshbandi Golden Chain to his successor, his grandson, Imam Jafar as-Sadiq(as).

[2] God said, “We have, without doubt, sent down the Message; and We will assuredly guard it (from corruption).” (15:9) This means the Divine Law is protected up to Judgment Day.

The 5 Levels of Knowledge Secrets of the Heart