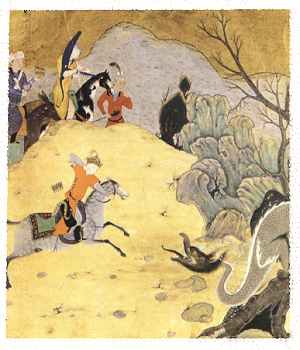 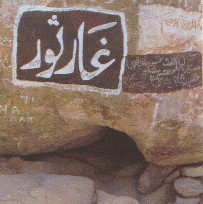 is known as “the Imam,” “the Inheritor of Islam,” “the Wise Judge,” “the Knowledgeable Scholar” and “One of the House of the Prophet

.” These were all titles the Prophet 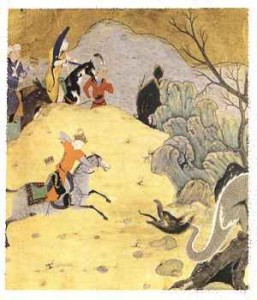 My heart has become capable of all forms:
A pasture for gazelles, a monastery for monks,
A temple for idols, the Kabah of the pilgrims,
The tablets of Torah, the Book of Quran.
I profess the religion of Love.
Whatever direction love’s camels take,
That is my religion and my faith.
—Ibn Arabi, Tarjuman al-ashwaq


Salman al-Farsi stood fast in the face of extreme difficulties and hardships, to carry the Light of Lights and to spread the secrets of hearts, to lift people from darkness to light. He was a noble Companion of the Prophet

who reported sixty of the Prophet’s Traditions.
{ Secret of Servanthood and in-service to the Rasul (s)} He came from a highly respected Zoroastrian family from a town near Isfahan. One day while passing by a church, he was attracted by the voices of men praying. Drawn by their worship, he ventured in and found it better than the religion of his upbringing. On learning that the religion originated in Syria, he left home, against his father’s wishes, went to Syria and associated himself with a succession of Christian anchorites. He came to know from them the coming of the Last Prophet

and the signs accompanying his advent.
He then traveled to the Hijaz where he was seized, sold into slavery, and taken to Madinah, { Complete and True Servant with no will of his own, allowed himself to be a slave to meet Sayedena Muhammad (s) } where he eventually met the Prophet

. When he found in the Prophet

the fulfilment of all the signs of which he had been informed by his Christian teachers, he accepted Islam. Servitude prevented Salman

from being at the battles of Badr and Uhud. The Messenger  helped him gain his release from slavery by planting, with his own hand, 300 palm trees and giving him a large piece of gold. Once a free man, he took part in every subsequent battle with the Prophet [as].
In Ibn Ishaq’s Sirat Rasul Allah, we find the following in Salman’s [as]

of his journey in search of the true religion:

that his master in Ammuriya told him to go to a certain place in Syria where there was a man who lived between two thickets. Every year as he went from one to the other, the sick stood along his way and everyone he prayed for was healed. He said, “Ask him about this religion which you seek, for he can tell you of it.” So I went on until I came to the place of which I had been told. I found that people had gathered there with their sick until he came out to them that night passing from one thicket to the other. The people came to him with their sick. Everyone he prayed for was healed. They prevented me from getting to him. I could not approach him until he entered the thicket to which he was headed. I took hold of his shoulder. He asked me who I was as he turned to me and I said, “God have mercy on you, tell me about the Hanafiya, the religion of Abraham .” He replied, “You are asking about something men do not inquire of today. The time has come near when a prophet will be sent with this religion from the people of the sacred area. Go to him, for he will bring you to it.” Then he went into the thicket. The Prophet

, “If you have told me the truth, you met Jesus

the son of Mary .”
In one of the Prophet’s

to dig trenches around Madinah in defence of the city, a suggestion that the Prophet  happily accepted. He then went ahead and helped the digging with his own hands. During this excavation, Salman

reported that the Prophet

At-Tabari recounts that in the year 16 AH/637 CE the Muslim army turned to the Persian front. In order to confront the Persian king at one point, the Muslim army found itself on the opposite bank of the great Tigris River. The commander of the army, Saad ibn Abi Waqqas , following a dream, ordered the entire army to plunge into the rushing river. Many people were afraid and hung back. Saad , with Salman

by his side, prayed first, “May God grant us victory and defeat His enemy.” Then Salman

prayed, “Islam generates good fortune. By God, crossing rivers has become as easy for the Muslims as crossing deserts. By Him in whose hand lies Salman’s soul, may the soldiers emerge from the water in the same numbers in which they entered it.” Saad  and Salman

then plunged into the Tigris. It is reported that the river was covered with horses and men. The horses swam and when they tired the river floor seemed to rise up and support them until they regained their breath. To some it seemed that the horses rode effortlessly on the waves. They emerged on the other bank, as Salman

had prayed, having lost nothing from their equipment but one tin cup, and no one having drowned.
They went on to take the Persian capital. Salman

acted as spokesman and said to the conquered Persians, “I have the same origin as you. I shall be compassionate toward you.

was eventually appointed governor of that region. He was the commander of 30,000 Muslim troops. Yet, he was very humble. He lived from his own manual labor. He did not own a house, but instead rested under the shade of trees. He said that he was surprised to observe so many people spending all their life for the lower world, without a thought for the inevitable death which will take them from the world one day.
He was a very strict and just man. Among some spoils that were distributed one day was cloth out of which each Companion had one piece of clothing cut. One day Umar  got up to speak and said, “Lower your voices so that you may hear me.” He was wearing two pieces of that cloth. Salman

said “By God, we will not hear you, because you prefer yourself to your people.” “How is that?” asked Umar . He said: “You are wearing two pieces of cloth and everyone else is wearing only one.” Umar  called out. “O Abd Allah!” Abd Allah, his son, answered, “At your service!” Umar  said, “I ask you by God, do you confirm that the second piece is yours?” Abd Allah said, “Yes.” Salman

said, “Now we shall hear you.”
Each night he prayed, and when he got tired he would start reciting dhikr with his tongue. When his tongue would get tired, he would contemplate and meditate on God’s power and greatness in creation. He would then say to himself, “O my ego, you took your rest, now get up and pray.” Then he would recite dhikr again, then meditate, and so forth all night long.
Bukhari relates two Traditions which show the Prophet’s

.
Abu Hurayra  relates:
While we were sitting with the Holy Prophet

, Surat al-Jumuah was revealed to him. When the Prophet

did not reply until I repeated my question three times. At that time Salman al-Farsi was with us. God’s Messenger

put his hand on Salman, saying, “If faith were at the Pleiades, even then some men from these people (i.e. Salman’s folk) would attain it.”
Abu Juhayfa  relates:
The Prophet

said, “Salman has spoken the truth.”
From His Sayings
Sulaiman al-Teemi  narrated that Salman al-Farsi

Sultanate of Sayyidina Muhammad ﷺ and the Naqshbandi Taweez