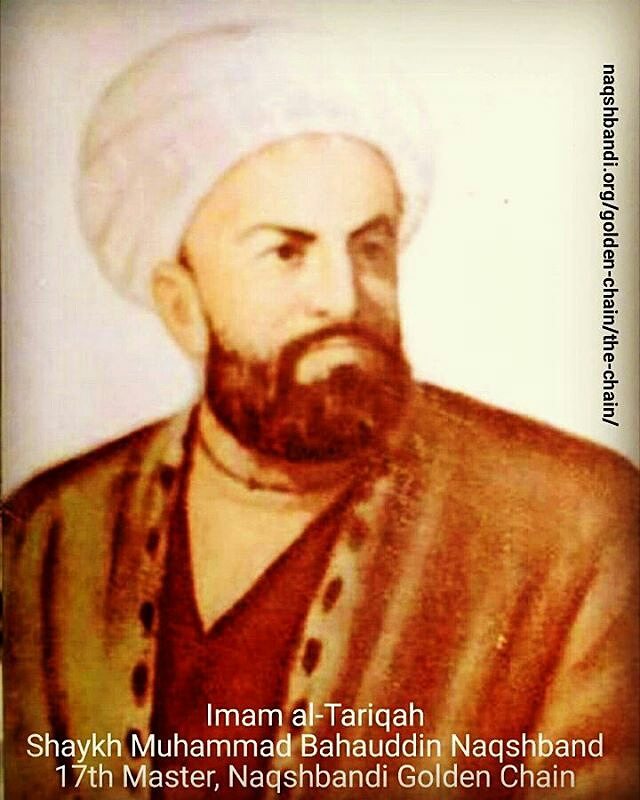 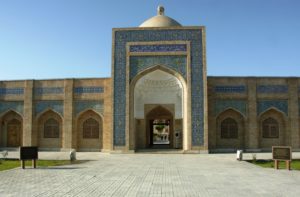 “Mawlana Shah Naqshband Uwaysi al Bukhari  is the Master of this Tariqat and the Shaikh of the Golden Chain and the Best of those who carried this lineage from the Khwajagan. He was born in the month of Muharram, in 717 H./1318 CE, in the village of Qasr al-’Arifan near Bukhara. Allah granted him miraculous powers in his childhood. He had been taught about the secret of this tariqat by his first teacher, Sayyid Muhammad Baba As-Samasi (q). Then he was given the secret and the mastery of the Order by his shaikh, Sayyid Amir al-Kulal (q). He was also Uwaysi in his connection to the Prophet, as he was raised in the spiritual presence of Abdul Khaliq al-Ghujdawani (q), who preceded him by 200 years.

Shah Naqshband (q) was eighteen years of age when he was sent by his grandfather to the village of Samas to serve the Shaikh of the Tariqat, Muhamad Baba as-Samasi (q), who had asked for him. From the beginning of his companionship with the Shaikh, he perceived within himself countless blessings and the urge for great sincerity and devotion.

–Sayyid Amir Kulal said [about Shah Naqshband], “…Allah has given him a secret that no one was given before. Even I was unable to know it.” And he told him, “O my son, I have fulfilled the will and advice of Shaikh Muhammad Baba as-Samasi when he ordered me to raise you and nurse you in my way of training until you surpassed me. This I have done, and you have capacity to continue higher and higher. So, my dear son, I am now giving you complete permission to go wherever you like…” 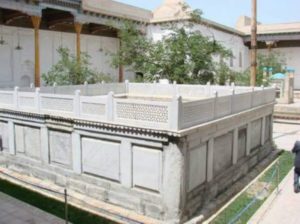 —“In his last days, he stayed in his room. People made pilgrimage to see him and he gave them advice. When he entered his final illness he locked himself up in his room. Wave after wave of his followers began to visit him and he gave to each of them the advice they needed. At one point he ordered them to read Surah Ya Sin. Then when they had finished the Surah, he raised his hands to Allah. He then raised his right finger to say the shahada. As soon as he finished, his soul returned to Allah.

He died on a Monday night, the 3rd of Rabi’ul-Awwal, 791 H. (1388 CE). He was buried in his garden as he requested. The succeeding kings of Bukhara took care of his school and mosque, expanding them and increasing their religious endowments (awqaf).

I will now narrate one of the stories of Sayyidina Shah Naqshband (Q) [Q =Qaddas Allahu Sirru (May Allah Sanctify his secret)] who is the imam of the Naqshbandi Sufi Order and a great ‘alim (scholar) in his time.

It means, whenever the awliya (saints) are mentioned the mercy of Allah descends on that group, because they are mentioning His saints. Where that mercy descends is one of the secrets revealed by Sayyidina Grandshaykh Sharafuddin (Q) and Grandshaykh AbdAllah al-Faiz (Q) during their seclusions, when they received secrets from their shaykhs and from the Prophet ﷺ.

Grandshaykh Sharafuddin ad-Daghestani  said, “When the stories of the saints and details of their lives are mentioned, the sins of the listeners will be shattered away as the shattering of glass.”

Being a great scholar in his time, he mentioned that Ibn Hajar al-Haytami often traveled one or two days (then they measured distance in time or days), to hear the stories narrated by Naqshbandi shaykhs. One such story is regarding Muhammad Bahauddin an-Naqshband (Shah Naqshband) of Bukhara, presently known as Uzbekistan.

When he reached the age of seven years, Shah Naqshband was brought to meet with all spirits of anbiyaullah (prophets) and messengers, in the presence of Sayyidina Muhammad ﷺ. In the presence of the Prophet ﷺ age is not significant, only the spirit is significant. Thus Shah Naqshband arrived in that holy presence at age seven. He was unique, for no one could match his level among all Naqshbandis of that time.

There in the presence of the Prophet ﷺ, Sayyidina Musa (as) asked Shah Naqshband,

Ya fard al`alam, “When were you chosen as a guide for humanity?”

Shah Naqshband (Q) replied, “I was a Murshid when Awliya were in complete non- existence.”

(Meaning, “I was Murshid before Allah created the Awliya [saints].”) He was not speaking about himself, but rather of the secret of the Prophet which was passed to him, at that level, in that unique state of ecstasy.

Then Sayyidina Musa said, “Explain; we want to know.”

That occurred when Shah Naqshband was seven years old, and it was his first irshad in the presence of anbiya, the awliyaullah [saints] and sahaba [holy companions].

Miracles and Powers of Shah Naqshband

On these special days of the year, Allah sends that special protection to the followers of Shah Naqshband. Whoever entered the Naqshbandi tariqat will be protected from all sides.

That is similar to the story of Sayyidina Bayazid al-Bistami [6th Shaykh of Naqshbandi Golden Chain].

When he was stoned and tortured by his tribe he went onboard a ship and prayed, “O My Lord! Take me to a place where I will feel happy.”

Bihurmat al habeeb wa bi hurmat al-Fatiha. For the sake of the Beloved, for his sake we recite the Opening Chapter of Qur`an.