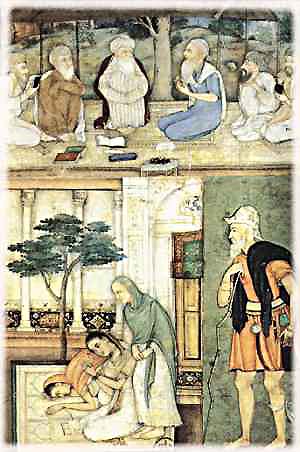 In the Place of refuge my heart sought refuge,
shot with enmity’s arrows.
O Mercy of God for His slaves, God placed His trust in you
among all inanimate forms.
O House of my Lord, O light of my heart, O coolness of my eyes,
O my heart within!
O true secret of the heart of existence, my sacred trust,
my purest love!
O Direction to which I turn from every quarter and valley,
From subsistence in the Real, then from on high,
from self-extinction, then from the depths!
O Kacba of Allah, O my life, O path of good fortune,
O my guidance!
God sheds His light on your court, and something of His light
appears in the heart.

He is The Rope of Allah (cUrwat-il-Wuthqa), the Pious Guide who combined in himself the sharaca and  Reality (haqiqat) and he showed the difference between Ignorance and True Guidance. He was born in the year 1007 H. He was educated by his father from the special knowledge of saints. He sat on the Throne of Guidance in the Naqshbandi Way after the passing of his Shaykh, at the age of 26 years. He became famous everywhere. His name was known on every tongue, and kings acknowledged his greatness in his time. People were flocking to him from everywhere.

He was a saint from his childhood. He never accepted to nurse in Ramadan. He spoke on the Knowledge of Oneness at the age of three by saying, “I am the earth, I am the heavens, I am God… I am this, I am that.” He memorized the Qur’an in three months at the age of six. He was trying through his heart to learn the true knowledge, Sharacat and  aqaqat and he reached the high state of these knowledges. He was considered at the age of 17 years to be the greatest scholar of his time. He was very truthful in all his Legal decisions (fatawa). He accepted neither innovation nor licenses.

His father Sayiddina Ah mad al-Faruqi, testified when he was young that a very great power would appear in him. One time he said to his father Sayiddina Ahmad al-Faruqi, “I am seeing myself as a life that is moving in every atom of the atoms of these universes. And these universes are taking light from it as the earth takes light from the sun.” His father said, “O my son, that means you are going to be the Qutb (Spiritual Pole) of your time. Remember that from me.”

He said, “I have poured into my son Muhammad Masum everything that I have been given.”

One time one of his deputies, Khwaja Muhammad as-Siddiq was travelling on top of a horse. His feet slipped from the horse and he was dangling from one stirrup. The horse was running so that he was expecting to die. He remembered at once to say, ‘O my Shaykh support me.’ As soon as he said ‘O my Shaykh support me.’ he saw his Shaykh appear, take the reins of the horse and stop it.

One of his followers said, “I fell into the sea and I didn’t know how to swim. I called out his name and he came and took me out.”

One time he was sitting with his followers in his khaniqah (spiritual center for retreat, prayers and meditation) and they began to see water pouring from his hands and his sleeves. They were surprised and they asked him, “What is this, O our Shaykh.” He said, “just now one of my murids was on a ship, and that ship was in a storm and was sinking. He called me and I immediately reached my hand and saved that person from drowning.” We recorded the time of that event and some months a merchant came among us. We asked him about that event and he said, ‘Yes, at that time my Shaykh came and saved me.'”

It happened at that time that one magician used to build a fire, and he would enter it and it would not burn him. There arose a great confusion aomng the people and it made a great fitna (dissension). So the Shaykh made a very great fire in the city and he told the magician, “Enter my fire!” and the magician was afraid. Then he told one of his murids, “Enter my fire, and while you are walking into it say LA ILAHA ILLALLAH.” That murid entered and it was cool and peace for him as it had been for Sayyidina Ibrahim [21:69] when he was thrown in the fire. When the magician saw this, he immediately converted and spoke the shahada: ash-hadu an la ilaha illa-l-Lah, wa ash-hadu anna Muhammadan rasalu-l-Lah.

One Shaykh Abdur Rahman at-Tirmidhi said, “I came with my brother to visit Shaykh Muhammad Masum (q). He gave everyone a gift from his clothes except me. When we returned to our country I was very sad, because I didn’t receive anything from him. After a while a rumor spread throughout the city that the Shaykh was coming to visit the city. All the people went to welcome him and I went with them. I saw the Shaykh coming on a white horse. He looked at me and said, ‘Abdur Rahman, don’t be sad, I have tested you and I have saved for you my special robe (jubba) which I inherited from my father, Sayyidna Ahmad al-Faruqi (q). I took it from him and put it on me. Immediately everything disappeared and my Shaykh appeared in front of me: in every atom and every particle, he was appearing. I reached a state of immense happiness and I entered the Divine Presence.”

One day a blind man came to him and asked him, “Please pray for me that Allah restore my vision to me.” He rubbed his saliva on his eyes and told him, ‘Go to your house an don’t open your eyes until you get there.’ He reached his home and opened his eyes and he was seeing.

.” He became upset, and in his hand was a knife with which he was cutting a watermelon. As he cut the watermelon, he said, “As I cut this watermelon, I am cutting the neck of that one who is cursing the caliphs of the Prophet

“When I was in Hajj, I saw the Kacba hugging me and kissing me with great compassion and emotion. Then Allah unveiled to me in a vision, lights and blessings coming out of myself, and increasing and increasing; until they filled up all the deserts, then all the mountains, then the oceans; they then filled up all the universes and they entered every atom of these universes. Then all these atoms were drawn back to the love of the Essence of the Ka’aba. I saw many spiritual beings, among them angels and saints, all of them standing in my presence as if I was their sultan. Then I received a written letter delivered to me by an angel, and written on it was ‘from the God of Heavens, Universes and all Creation, I am accepting your pilgrimage.’

“Then I continued my travel to visit the Madinat’il-Munawwarah, the City of the Prophet

. I entered the city of the Prophet

and I went to visit him at his tomb. When I directed my face to his face, I saw the Prophet

coming out of his grave, and he hugged me and kissed me. Then I saw myself in a state, where my heart was as if combining with his heart, my tongue with his tongue, my ears with his ears, until I was not seeing myself, I was seeing the Prophet

and when I looked at the Prophet

I was seeing myself. That vision took me to the station of Ascending to where the Prophet

had ascended in the Night of Ascension. I received there all the knowledge that the Prophet

wanted me to receive.

“Then I moved toward the two grand caliphs of the Prophet

. As soon as I was in the presence of Sayyidina Abu Bakr

, I saw on my shoulders a red robe. Then when I moved on to Sayyidina cUmar

, and he was the center of all light that moves in every atom.”

“What the Prophet gave me at that momemt, if I were to say it, they would cut my neck. Then I found that every prayer on the Prophet

and every praise of Prophet

and every poetry that was written for the sake of the Prophet, was as if it was for me. Then I saw all these universes, from the Station of the Throne to the Station of the World, had been enlightened and were shining with my light. When the time came to go back to my country I was on my last visit to the Prophet

come out of his maqam (station). He dressed me with dresses that have never been seen before and he put on my head a crown. That Crown came from the King of Kings, from the Divine Presence, decorated with every kind of Jewels, whose description cannot be described in this world. And I knew that Crown and those dresses had been given to me from the Dresses of Allah Almighty and Exalted, which He gave to His Prophet

in the Night of Ascension and which the Prophet

had kept for me and adorned me with on that night.”

He died on the 9th of Rabi’ul Awwal 1079 H. He passed the secret of this Order to Sayyidina Sayfuddin al-Faruqi al-Mujaddidi (q).