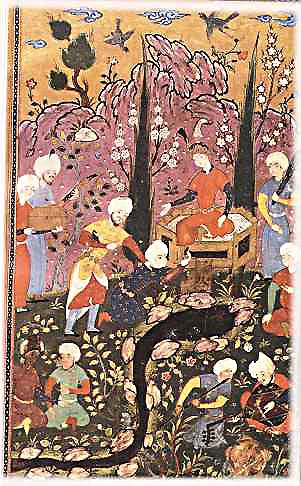 “O perfect, full Moon! The house of the heart is Thine! The intellect–which was once the master–has become thy slave and doorman.
From the day of Alast [“Am I not”] the spirit has been drunk with Thee, though for a time it was distracted by water and clay.
Since the clay has now settled to the bottom, the water is clear–no more do I say, ‘This is mine, that is Thine.'”

He was the Inheritor of the Secrets of the Prophet

and the Ultimate of the Preferred Saints. He was the Imam whose majestic position everyone acknowledged and whose blessings reached far and wide.

He was born in Amkana, a village of Bukhara. He was raised by his father and his uncle. During his childhood he was well guided, until he became like one beneath an exalted dome, protected from every shame. He never discovered any good characteristic except he acquired it. He discarded even the smallest mistakes and errors. He never encountered a high station without encompassing it, nor a valuable secret without keeping it, nor a delicious spiritual taste without savoring it. He followed his father like the sun on a bright day and like a full moon in a dark night. He sat on the Throne of Succession and he tried his best in lifting up the hearts of people. He wore the cloak of the Qutbs (Spiritual Poles) and every atom in this world, whether human or animal, plant or inanimate object, was supported by his spirituality. The light of his power enlightened the Way of this Order, so that his fame was spread far and wide, and people ran to him to receive his knowledge, to be guided by his light and be enlightened by his guidance. His door became the aim of every Knower and the Qiblah (Focus of Spiritual Attention) of the hearts of the Pious. He was dressed and decorated with the attributes of the Divine, attesting to his high position in the Heavenly Realm.

These are some of his blessed sayings:

“Everyone must know that for the seeker to progress in this Tariqat, he must first sear into his heart the image of his Shaykh, until the traces of the heat of that connection become visible. He must direct that heat to the Essential, Universal Heart. This is the level of the heart in which exist the combined realities of all humanity and all creation, worldly and heavenly. Although there is no physical incarnation, all ancestors and eventually all creation exist in the Essential heart. The seeker must not be distracted by the details of the creation, but must direct the power of the Heart towards the One whose Reality encompasses everything. He must be free of any doubt regarding the manifestation of the One who is always Present, and must know that nothing exists except Allah, Almighty and Exalted. He must see with the Eye of Truth that all creation appears and exists through Allah alone.”

He died in 1016 H. He passed his secret to Shaykh Muayyidu-d-Din Muhammad al-Baqi (q).