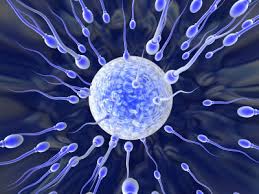 Realities of The Circle and

Our First Hajj was in The Womb

The expansion of creation is the symbolized by the border of the circle, the circumference.   The surat al-Fatiha is symbolized by circles and the Divine kingdom is within.

Outside is the Divine essence which supports creation.

At the center, The Divine said, “I was a hidden treasure wanting to be known.”

“I was a hidden Treasure then I desired to be known, so I created a creation to which I made Myself known; then they knew Me.”

The center wants to be known, so direct yourself to the Divine kingdom, seek to find the way to the center!

Don’t be lost in what people define as “religion” as you seek the path to the center.

The line from the center to the perimeter is the radius.  Each radius is a Messenger, a Prophet, those with whom Allah is satisfied “Radi”.  They are the Pillars of Creation; they hold the circle together, for without them there can be no circle.  They deliver the message – “This is your Creator, this is who you are to worship, and you must follow this discipline in order to reach the center.” An Atom with a nucleus as it’s center of power.

Each radius also leads back into the center; and the Nabi’s (Prophets) are the big pillars.  We are taking the main radius of Prophet Muhammad (s) and within that are the “inner ways”, the tariqats. The circle is Shariah and everything to do with the circle is the law, and you cannot go outside it.

Tariqat-As soon as you say “I want to take the way”, then you are on that way.  You have joined the people of Marifah, on the way to knowledge of the center, Gnosticism.

Haqiqat- Every step you take on the way is truth, Haqiqat.   When you reach the center you gain Divine Knowledge of the center, which opens Haqaiq (realities) for you.  Then you have knowledge of the entire circle because you hold all the spokes that reach the circumference.

In this Allah shows you that you cannot be outside the circle because from the physical level to the atomic level you are in an ocean of atoms. Your smallest level is your atom and it submits better than your physicality. Within its nucleus all the electrons are circumambulating. THAT is the circle of life and there is no escaping it.

The fastest path to the center is the one with most power and the knowledge of living saints. The Naqshbandi way takes you to the center by way of living connected saints who are full of power.  That is why Naqshbandi associations are alive.  When we begin, 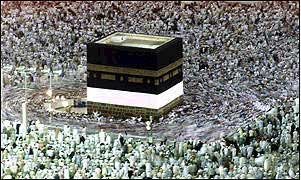 with authorization, to do dhikr, they have authority from the Saint of Light to re-synch hearts that are disconnected from universal beat.   This is the Hajj.

Hajj is to submit to that reality; you must once in your lifetime open our selves to that understanding.   At Hajj everyone puts on the dress of white – of light – which shows that they are equal in the eyes of Allah (swt) regardless of their education, economic status or skin color.

Come to the Holy Precincts – the Ka’bah, with Safa and Marwa; the Ka’bah is mim. The Ka’bah represents the nucleus of your existence; you circumambulate and praise your Lord for your existence in the same way the planets circle the sun/ Light and the electrons whirl around the nucleus of the atom.   As soon as pilgrims begin tawaaf, all individual differences are put aside and the scattered bits of light come together as an Ocean of Oneness,  Wahdaniyyah.

Make tawaaf, circumambulate around the Ahadiyyah, the unique Oneness center, and know that you have approached the unique station of the Kabah.

Mawlana shows us how that is happening every moment of our lives.

Allah/ The Divine shows us, in the womb of the mother is the same circle, where the Hajj takes place on a microscopic scale.  The Ahadiyyah / Unique Oneness is The Egg and the 500,000 sperm (named mani in Arabic) are hajjis, all vying with each other to reach it in order to be Abdullah/ Servant of God.  The one that reaches the egg will get to the station of creation; that one seed will go into the Ka’bah of the womb, do its khalwah isolation for 9 months and come out as a new creation.

You had the Winning Gift 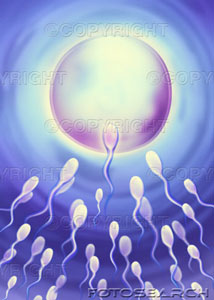 From The Divine and survived while the other 499,999 did not; you were the miracle, and are already blessed and loved by the Divine.   Mawlana says to you, now do this a second time, I am bringing you to marifah of the soul.

So take your body and make tawaaf and ask Allah (swt)  “Ya Rabbi/O My Lord, it is not enough to be on the outside. Let me go inside the Ka’bah.”

This time Allah says, “Yes you can, this Ka’bah represents the heart of Sayyidina Muhammad (s), just as your soul came from mani, Muhammadan Nur.”

All prophets are brothers in the brotherhood of the Prophet (s), and whatever prophet you love is the reality you are seeking.   Everyone around the circle has the same center.  Allah is saying jump into that center, jump into the Ka’bah, the Prophetic station, the lights of marifah (Gnostics).

Don’t keep thinking it is Hajj and everybody is going to visit Saudi Arabia.  It is more than that.   Now Mawlana is asking you to be more specific in your request.   “Ya Rabbi, let me go to the heart of Prophet (s), open the doors of Prophet’s (s) heart.”   If you are in this association you have been granted permission to ask that because your soul is from Naqshbandi realities. We are asking to open the door of Sayyidina Muhammad’s (s) heart.

All you see during dhikr is Ka’ba Sharif and you are asking Prophet Muhammad (s) to let you go into his heart, to make tawaaf there with the soul of Sultan al-Awliya and the soul of Mawlana Shaykh Al Qabbani.

A high reality was reached by those who came here to visit Their Shaykhs ,

The Shaykhs are the living Kabah and the Qibla

Furthermore, the one who goes to Cyprus is a real Hajji; that is a gift for the seeker.  One destination is obvious – visited by 3 million people, but only 300 people visited the secret destination.  That is a secret in the night sky – the tiny stars can show you the way.  But during the day there is no guidance like that. 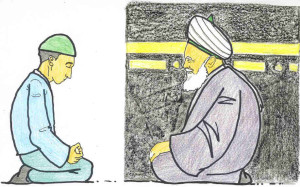 Which then is holier, Ka’bah or That which Allah made with His Two Hands?   If you think bricks and stones are holier, which are made from Men, then that is idol worshiping.  It is the presence of Sayyidina Muhammad (s), Rabb al-Bayt, that is what makes the Ka’bah holy.   Then if Prophet [s] emanation is on Bani Adam  whom Allah created with His Two Hands then the Shaykhs secret is much higher.

When we accept the guides in our heart, he is the Kabah.  Shaykh al Hisham  is the reflection of Shaykh Nazim al Haqqani, Sultan al-awliya, and when we dress ourselves in the Shaykh  we invite that Ka’bah (Shaykh Nazim) into our lives. When you believe and understand that he is everything in 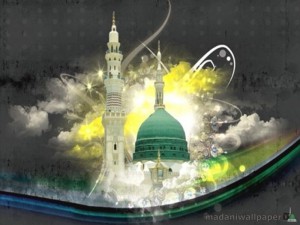 your life, then Prophet (s) opens the City of Lights. Medina Munawira.

Then we need to get into the Ka’bah. Once you get into the Ka’bah, there is a secret highway underground to the city of the Prophet (s).   Visualize that you are going into the Prophetic (s) heart, and ask   ”Dress me from Mawlana Shaykh and let me go to the City of Lights, Madina al-Munawira.”   Now He brings His light. That is what we are aspiring to — these are days of marifah.

Arafat is the station of knowing.  We went to the Ka’bah and laid ourselves to be sacrificed like a lamb; let us be halal for Sayyidina Muhammad (s).   Let us each say “Ya Rabbi, my head is on the floor, I don’t know anything nor should I claim to know anything until I have tasted from that reality.  Let the Zabiha (sacrifice) take place and take away “what I think of myself” and “what I don’t know.”

Why Do We Recite Surah 36 Ya Seen 3 Times Looped for The Deceased?

Ancient Unseen Jinn Wars & Their Effects On Humans On Earth

Hidden Treasure is Rajab, Will Be Known in Sha’ban and Will Manifest in Ramadan