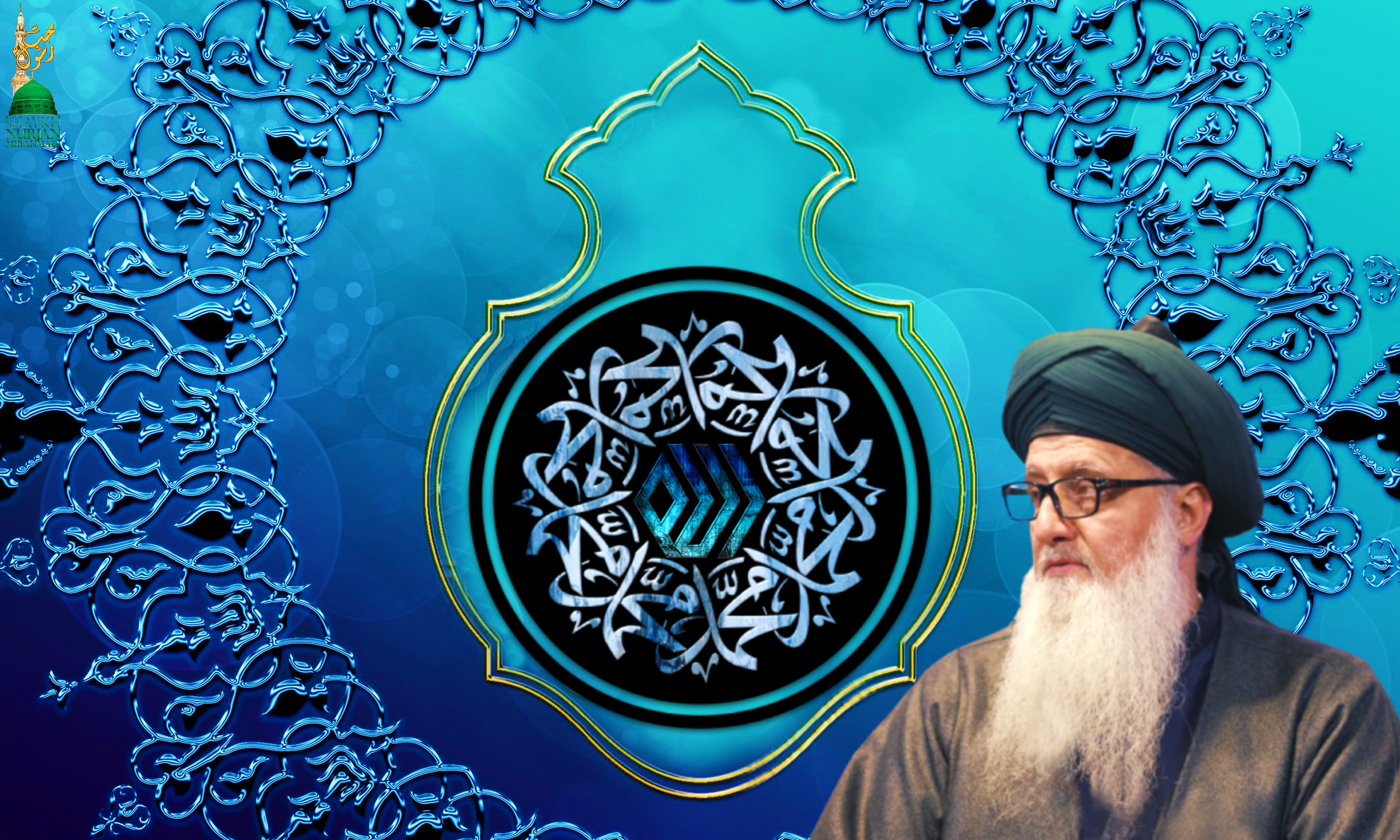 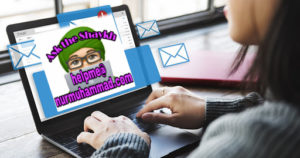 When you want to ask questions inshaAllah, reminder always that [email protected]. We open up the lines for questions and emails to learn more from the subjects that have already been taught. That adab (manners) of questions is not to challenge, to debate – there is no debate. But to ask questions on subjects that have been taught, for further understandings or issues within our lives. In the open forum, again, the questions related to the teachings and not to impress the other people that you have very complicated questions that nobody can even understand. Keep everything please down to earth so that the general audience understands everything. InshaAllah.

Question: How much is the qurban this year and is it best to give to Fatima Zahra?

Question: How can we increase love for our murshid (authorized spiritual guide)?

Shaykh Nurjan Mirahmadi: InshaAllah, keep your salawats (praisings), keep the practices, inshaAllah. All of these energy practices, all of these teachings they’re giving is to increase that love for Sayyidina Muhammad ﷺ. And the ihtiram (respect) that they have for those whom teaching that love. So their knowledges, their faiz (downpouring blessings), their zikrs (remembrance), all of that builds that relationship. 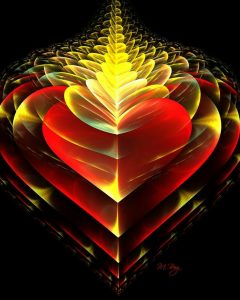 And when the relationship begins to enter into the heart, then the student begins to feel that attraction and feel that faiz. Try not to bounce around, we said before many times, this is a path based on loyalty. If you’re clicking around to a hundred different people, listening to a hundred different talks then nobody knows you. And you think you know fifty shaykhs but you have to develop a relationship with one shaykh. Find the shaykh that your heart resonates with and develop that relationship, inshaAllah.

Question: What should we do to get ourselves prepared in these difficult times. Should we increase our skills which we have or stop everything and practice only zikr and daily practices?

Shaykh Nurjan Mirahmadi: No, you have to live in the world, inshaAllah, as if it’s going forever, and pray all night as if the world is ending tomorrow. So, it means that we have to keep a balanced life of working hard, paying our bills, and Allah (AJ) wants the balance, wants the struggle. It’s not about trying to find the easy way. It’s the hard way in which people work, struggle throughout the day and at night they come to try to find a balance, a time to meditate, a time to be with their children, trying to be with their family. And keep that balance, make a time, time management to do your awrad (daily practices). Everything is a discipline. 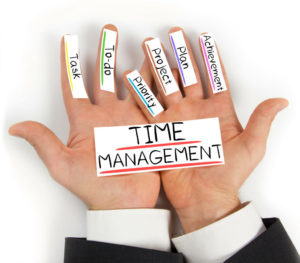 When people say they don’t have time to do their zikr and their awrad; no, they just don’t have good time management. Everybody has a time in which they’re driving on a bus that they can split their zikr at one point and then split the zikr driving home or on the bus going home. So, it’s about managing your time. If it’s something that you truly care and truly you love. And then you discipline yourself when everyone goes to sleep, ‘I’m going to spend a little bit of time meditating, and that way I can achieve what I have to achieve.’ InshaAllah.

Question: How can one battle with his thoughts to keep his focus on the prayer and not focus on irrelevant thoughts? 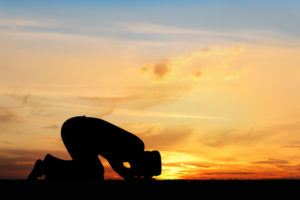 But in reality, that if we don’t understand energy – and that’s why then these awliya (saints) and those whom taught by awliyaullah – everything is based on a qudra (power). Because this is the common denominator of every issue and every problem we have. If somebody calls and says that they can’t pray, they don’t have the ability to pray anymore, that they don’t feel like praying. And it can go so bad that if they try to make sujood (prostration), something will burn them from making the sujood. 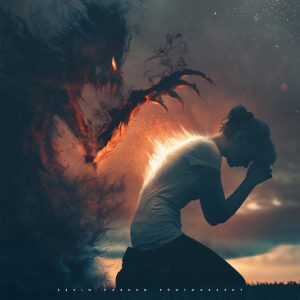 It means that, can you describe them by salah and force the person, ‘Go make wudu (ablution) and now pray!’ Say, ‘They can’t.’ If you think your salah is going to save you, and take away sayyiati amalina, and take away your sayyiat (sins), you don’t understand what’s happening. So, it means that when you sin through your action, you lost the protection that Allah (AJ) has given. As a result, ten ifrit (powerful demon) have jumped into you. They’re around, billions and billions of ifrit are all around us. As soon as you sin your shield of protection is down. For example, ten of them enter into your being. 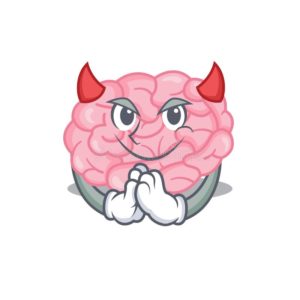 So, they sit within you and keep pushing all of your control panels, ‘Don’t pray now, close the ears.’ They cover the ears, they make everything distracted, ‘Look at your phone!’ You missed your salah, ten more now can come. Because now your sayyiati amalina, the sins of actions, ‘Wooo,’ is opening up the door. Now they’re not even open; some people have like revolving door, it’s never closed – what happens then? They’re coming in at such a force they overtake that insan (human being). 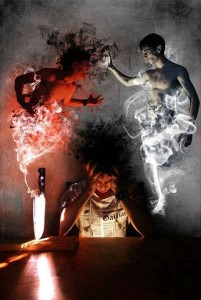 And if they overtake, they will not pray. And if you see these homeless people, if you try to wash them, they’ll burn and scream, why? Because the ifrit in them don’t want water. They’re scared to death of water because they’re going to burn. So, it means it’s very real. The energy comes into insan and overtakes them. If you understood that energy, and that energy has overtaken somebody then why would you guide them that, ‘Go make your salah!’ And now force the person, ‘Go make your salah!’ That’s not going to help. They don’t have the energy ability to do that. What’s now inside them has overtaken them. So then what helps? Why Allah (AJ) then says, “Ittaqollaha wa kono ma’as sadiqeen.”

“O you who have believed, have consciousness of Allah and be with those who are truthful/ Pious /sincere (in words and deed).” (The Repentance, 9:119) 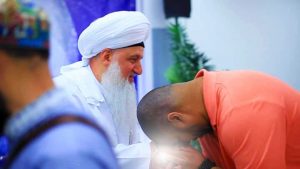 If Allah (AJ) knows that the energy reality and says, ‘Have a consciousness and keep the company of these truthful servants.’ Why keep their company? Because Allah (AJ) knows that these people are ahle zikr (people of Divinely remembrance). These people, Allah (AJ) has dressed them with energies. These people, the energies are so powerful that Allah (AJ) want you, ‘Go and be with them!’ Because the mirror moving towards their presence, their energy will begin to burn away everything inside that person. Because it can’t escape their nazar (gaze). Their energy’s not a physical energy, their energy is from the soul. When their soul energy begins to direct to you it’s like a laser; it goes inside everything of your being, and dressing everything inside of you. Their light is not sticking on the outside of you. Their light that Allah (AJ), where Allah (AJ) says, ‘Be conscious of the firasah (spiritual vision) of the believer.’ Why? Because they look with the light of Allah (AJ).

“Beware [be conscious] of the firasah of the believer, for he sees with the light of Allah,” Prophet Muhammad (pbuh) (Tirmidhi)

What’s the light of Allah (AJ)? It’s a fire, it’s not a pleasant light where devils enjoy it, it burns them. And that’s why devils try to pull the eyes of people out. They don’t want to see in the eyes of people. That’s why you go to bad neighborhoods, ‘What are you looking at?’ Who’s saying that to you? It’s their devil. The devil is saying that, ‘His eyes are burning us, don’t look at his eyes!’ But when Allah (AJ) dress his awliya and those whom follow awliya, and those whom love Sayyidina Muhammad ﷺ, their eyes are like fire coming out onto these devils. So, when they look at and gaze at somebody, their fire goes and begins to burn everything in that person. So, that’s why their devils and their jinn (unseen beings) they stay outside. Very far outside. 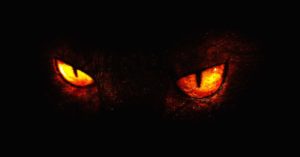 And that’s why everyone comes peaceful to the zikr, some go a little bit crazy when things are trying to leave them. They stay peaceful until you get in your car. When you get in your car and go down the block where he’s waiting for you, then all your waswas (whispering) come, ‘Oh, why he do like that, why they serve our dinner late, why was it like this, do you know they took my tea away from me?’ Because he was waiting there, he caught you when you were coming out the way, he didn’t wait here and do that. So, it means now energy is very real. So when their gaze and their association, we said before that imagine if that Shaykh is like that, or his students are dressed by his nazar, and the madad (support) of the Centre and the zikr location, all their madad is coming down. 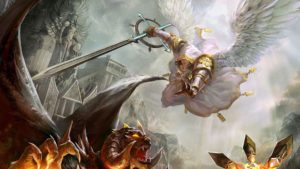 When their madad comes down they’re like swords of light, nothing’s going to escape this room without being cleaned. And we described before that when you watch live, turn the sound on because their light and their madad will come into the homes; the zikr will enter the homes. From Budala, Nujaba, Nuqaba, Awtad wal Akhyar, jinn wa malaika (angels), seven categories of spiritual beings enter into the home. To do what? To begin now the cleansing within that home and all the zikr that they’re playing to again attack anything that’s coming. Any type of energies that are coming, they’re cleansing. And that’s the purpose of why they’re doing what they’re doing. So it means no, Allah (AJ) has many remedies, and that’s why Prophet ﷺ described that, ‘When you see a circle of paradise, don’t leave it!’ 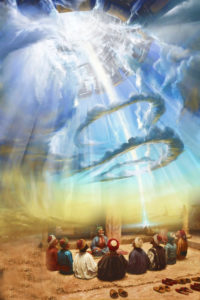 Now where are all the paradise people? They said there’s like a thousand mosques and ten-thousand, fifty-thousand worshippers; didn’t they want paradise? Circles of zikr have ten people in them. Something’s off. What happened to the people who wanted paradise? And then paradise has a fire and a power against shaitan. So when Allah (AJ) is saying, ‘This is a circle of paradise, and my malaika (angels) are all around all the way to ‘Arsh ar-Rahman (Throne of The Most Merciful), don’t you think they have like a fire from Divinely Presence, cleansing and burning, and destroying everything that’s wrong? The malaika of paradise, they don’t accept any falsehood, they don’t accept the badness. They come and they cleanse and wash and clean everything. We pray that Allah (AJ) give us more and more understanding, inshaAllah.

After Isolation Many Devils Are Coming