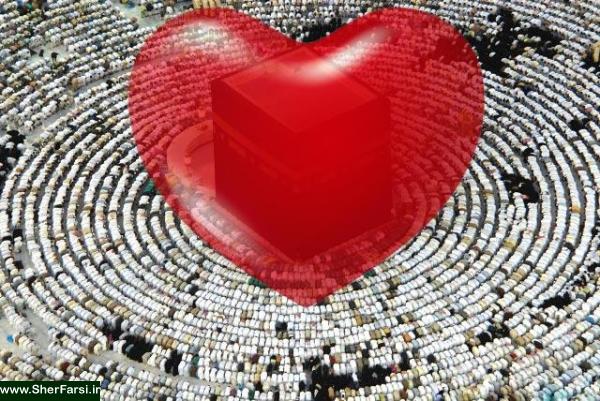 The Spiritual Hajj of the Heart

Allah (swt) says; Neither My Heavens nor My Earth can hold Me, but the heartof my servant, the believer, is a house for me.

We Must go deep into the importance of These Anbiya (Prophets) peace be upon them.

Searching for Allah, Allah (swt) says; Neither My Heavens nor My Earth can hold Me, but the heart of my servant, the believer, is a house for me. ..and sanctify My house for those who compass It round, or stand up, or bow, or prostrate themselves (therein In prayer). (AI-Hajj:26)

To be with Allah we must be with Nabieen Prophets ,Siddiqeen Truthful, Shuhadah Witnesses wa Saliheen Righteous.

It is known that physical worship is an imitation of what is real, and the Hajj is no exception. The reality of worship is completely different for one who has attained a higher level of understanding and sincerity compared to the common individual, and it is for this reason that Prophet (S) said that although two individuals may pray beside one another and superficially appear not unlike one another, yet the difference between their prayers is as the difference between the heavens and the earth.

The reality of worship is known to the soul, and he who is close, or in union as Awliya are, to his soul will find infinitely greater depth in his worship. All souls are by divine will in a state of Islam and in perfect surrender to the Lord of Heavens. Thus the closer one moves towards himself, his true self, the closer he or she will come towards the identity of “Abdullah,” an honored servant of the Divine. The journey towards oneself is but the journey from the superficial world of illusion to the genuine world of spiritual reality. This is the journey from the superficial self, the ego, to the only true and real Self – Sayyidina Muhammad (S).

“There are no days more loved by Allah for you to worship Him therein than the ten days of Dhul Hijja. Fasting any day during it is equivalent to fasting one year and to offer Salatul Tahajjud (late-night prayer) during one of its nights is like performing the late-night prayer on the Night of Power (Laylatul Qadir).”

These first ten days of Dhul-Hijjah are the days of the Hajj, the pilgrimage for all believers towards the House of God, and so hold special significance for Naqshbandis and spiritual seekers of truth. Because the soul is in constant and perpetual service and surrender, it never fails to perform its obligatory worship. This is the time of pilgrimage and the soul is going. Now is the time for those who seek unity and reality to go with their souls on this spiritual journey, on this Hajj of the heart, and to find the essence of their goal, to enter and to be annihilated in the House of God – in the Presence of Sayyidina Muhammad (S).

The secrets of the heart, as revealed by Mawlana Shaykh (Q), are meant to show us that he who takes steps to come to know himself will, by the grace of God, come to know his Lord. Now is the time to make the internal journey through these levels and to reach their end, the beginning of real reality.

The Five Levels of the Heart and their Dhikr

Following are the five stations of the heart and their corresponding meanings and practices. Embrace these practices during Muraqaba, meditation, and take from the endless fruits Allah (SWT) is offering to any who but ask.

Seek to understand Why your Heart has 4 valves and the Kabah has 4 corners.

(1)   Qalb – the Heart. Dhikr “Ya Sayyid.” Seek annihilation in the presence of the Shaykh (Q). Being the station of Sayyidina Adam (A), come to realize the secret of the honor Allah (SWT) bestowed on mankind when He said, “And I have honored the children of Adam (A).”

(2)   Sir (the Secret ) –  Dhikr “Ya Sahib.” Seek to become of the Martyrs and Saints, the Witnesses, who know and see the truth by having turned away from the illusion of dunya. At the station of Sayyidina Noah (A), learn from him sincerity of belief, real and substantial Iman/ faith, that one may progress towards Ihsan – perfection in the Divine Presence of God.

(3)   Sir Sir – Secret of the Secret. Dhikr “Ya Siddiq.” Here one seeks to become of the Siddiqeen, the perfect lovers and servants of Prophet (S), they who have turned away from dunya completely and who have no attachment to it whatsoever. It is they who have severed all connections to this world and have overcome its pull completely.

(5) Akhfa – the Most Hidden. Dhikr “Ya Allah.” Herein your soul will receive heavenly emanations and the dress of the Servants of Allah (SWT), the Muhammadiun, the perfected mirrors of the Divine. Herein is complete annihilation and non-existence. Herein is perfect love and peace, unity of vision, light, life, love, knowledge, eternity.

The Four Corners of Ka’bah Sharif

Allah (swt) says; Neither My Heavens nor My Earth can hold Me, but the heart of my servant, the believer, is a house for me.

…and sanctify My house for those who compass It round, or stand up, or bow, or prostrate themselves (therein In prayer). (AI-Hajj:26)

Science of Heart & Secrets of The Saints

Map of the Human Heart

poor blood (shown in blue) flows from the body into the right atrium.

Blood flows through the right atrium into the right ventricle.

The right ventricle pumps the blood to the lungs, { This Where Dhikr on the Blood} where the blood releases waste gases and picks up oxygen.

The newly oxygen-rich blood (shown in red) returns to the heart and enters the left atrium.

Blood flows through the left atrium into the left ventricle.

The left ventricle pumps the oxygen-rich blood to all parts of the body.