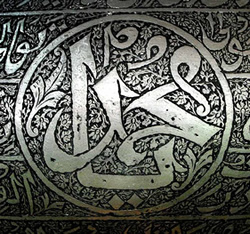 What’s in a Name

At his birth were three ladies taking care at the birth of Sayyida Amina {as}. Sayyida Hawa {as}, Sayyida Asya {as}, and Sayyida Maryam {as} were taking care of Prophet Muhammad’s birth. And she saw an angel that told her when he is born giving the name Muhammad.

Is the Spinning Oceans of Power,

“Those who follow the apostle, the unlettered Prophet, whom they find mentioned in their own (scriptures),- in the law and the Gospel;- for he commands them what is just and forbids them what is evil; he allows them as lawful what is good (and pure) and prohibits them from what is bad (and impure); He releases them from their heavy burdens and from the yokes that are upon them. So it is those who believe in him,honour him, help him, and follow the light which is sent down with him,- it is they who will prosper.”

4th Name of Rasul . Mahmud (the Most Highly Praised),

Dressed by Allahs 4th siffat al Quddus “The Pure One”

{Ascent to the Kingdom}

17.79 And pray in the small watches of the morning: (it would be) an additional prayer (or spiritual profit) for thee: soon will thy Lord raise thee to a Station of Praise and Glory! Maqam Mahmoud.

92.18 Those who spend their wealth for increase in self-purification,
92.19 And have in their minds no favor from anyone for which a reward is expected in return, 92.20 But only the desire to seek for the Countenance of their Lord Most High;

92.21 And soon will they attain (complete) satisfaction

Because he is the center of HAMD and Muhaamid al-kawn.

Now if they want to examine a diamond they put on it a machine that measures the reflective wavelength. Even in a stone there is a wavelength that they measure. How was that instrument able to measure without a wavelength coming out form that . and that is the meaning of wa in min shayy’in illa…

So that means every smallest particle that you can imagine as a scientist must have a wave that shows its existence. Without a wave it cannot exist. Because it has to give something out. And Allah said to amina thru the angel, when he comes name himMuhammad, because he is the center of HamdAllah.

He is the center of the HAMD. It means all hamds have to cross section thru that center. They have timeless and timelessness have to go thru that birth that amina is giving.

There Is no Muhammad before and no Muhammad after him. And his name is made of two Meems, not one.

And the second one is Mulk al-Hayat, Meem Ha. That is the eternal life, the one that is never gone, it is entirely energy.

Muhaamid al-Hayat are the praises that are timeless.

The 2nd ones, Muhaamid ad-dunya are also going thru Prophet (s) but they go thru that part that is related to time. [Dunya Form]

So she called him Muhammadur rasulullah, thru that we know pre-eternal and eternal. It has to cross section there.

That is why to Awliya, as you explained scientifically.

One time Mawlana Shaykh caught hold of my hand and he said, look professor. The orange tree is saying something to you and he was not referring to the oranges in the tree. Alhamdulillah what you say today is bringing all these things together.

You looked at the orange tree and it was saying something to me.

Mawlana: you didn’t say what it was saying.

Every living thing has a wave traveling out of it. When it is  observed the wave becomes a particle that travels to the speed of light. So all of Allah’s creations extend itself to us by means of these particle-waves. Then it is as if we accept that and his existence extends his hands to us.

Awliya’ullah never take their gaze off of existence to for them it is eternal.

Every question is difficult, like an engineer, you are asked a question, so you begin to concentrate and to put together source to formulate an answer.

With Mawlana Shaykh it is as long as you are not seeing yourself and you are seeing the Shaykh and accepting completely the importance of the Shaykh in your life and in your work and express it to the people who are listening, not as if it is from you because it was from you or you were clever or you were educated, then the answers come from the main source that is because you say, I cannot answer these questions as long as there is no support from the main source and as long as you know that you are worthless and you have to  prove that to the people for you, then as long as you speak they open to you. And they open to the standard the listeners. As much as people thirsty you give. It depends on each association. Always they give to the level of the most advanced one in the meeting. They are not going to give basic.

In recent years, today, Mawlana Shaykh always giving lectures from a very basic level. Before in the 70s and early 80s he was giving very deep lecture, very intellectual lectures in spirituality. Which he is not giving anymore. Because the average level of the people is lower now.

Because of the question you asked before, is it a latifa. The knowledge of people is not up to 100%. That is why he doesn’t give to a high level except in private meetings, where he gives them what he wants them to say. Now as I said, it depends on how the listener’s belief and how much they want to take, he sends. It is not me that I know or you that you know, but how much he is inspiring thru his channels to his heart or that heart.

Station of The Sir (Secret) 1

Secrets of Light and Quantum Physics