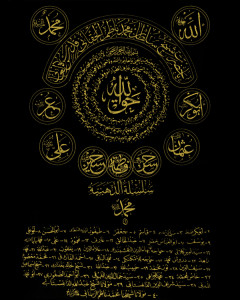 The Haq (Truth) Has Come

“And say, Truth has come, and falsehood has perished. Indeed falsehood, [by its nature], is ever perishing/bound to perish.” (The Night Journey, 17:81)

Who Has Seen Prophet Muhammad ﷺ Has Seen Haq 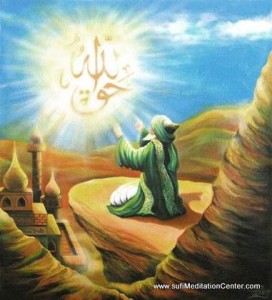 Allah (AJ) Gives the Kingdom to Whom He Wills

The Taweez is a Top View of the Divine Court

The Divinely Throne and the Naqshbandi Taweez

The Understanding of the Divine Court

”Neither My Heavens nor My Earth can contain Me, but the heart of my Believing Servant.” (Hadith Qudsi conveyed by Prophet Muhammad (pbuh))

That is why Prophet Muhammad ﷺ said, ‘I was a Nabi before Adam (as) was between water and clay.’

“I was a Prophet and Adam was between water and clay.” Prophet Muhammad (pbuh)

He is teaching us that his eternal position in the Divine Presence is in the world of souls and light. This is a timeless dimension. He is the Messenger of Allah (AJ). The messenger, the one who speaks on Allah’s (AJ) behalf, to all creation, eternally. Who is created before the physical creation of the form known as Adam (as). The Divine Kingdom was created first. The Divine Kingdom has no time! Time is only relevant to earthly life based on the sun, moon, and Earth.

Nothing Can Come Between Ahad and Sayyidina Ahmad ﷺ

Between Ahad (AJ) and Sayyidina Ahmad ﷺ, there is no created being between them. 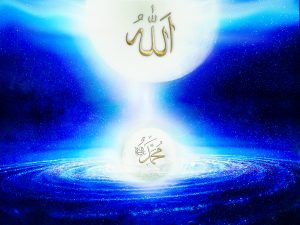 All heavenly beings must go to Sayyidina Muhammad ﷺ. He is the shafi, the intercessor. He hears Allah’s (AJ) Holy Command “Qul.” Nothing in creation can carry the power in the qaf of Qul, except the Messenger of Allah (AJ).

“It is not fitting for a man that Allah should speak to him except by inspiration, or from behind a veil, or by the sending of a messenger to reveal, with Allah’s permission, what Allah wills: for He is Most High, Most Wise.” (The Consultation, 42:51)

Know that in Arabic, ‘the Throne’ is a designation by which the kingdom is meant.

By: Shaykh Al-Akbar Sayyidina Ibn Arabi
(The Throne and its angelic inhabitants)

The Angels Surrounding the Throne of Haq

“And thou wilt see the angels surrounding the Throne on all sides, singing Glory and Praise to their Lord. The Decision /judgement between them will be in truth/justice, and the cry (on all sides) will be, ‘Praise be to Allah, the Lord of the Worlds!'” (The Troops, 39:75)

The Word Haq in Ilm Huroof (Knowledge of Letters)

How The Word Allah (AJ) Relates to Haq ﷺ

Sayyidina Muhammad ﷺ is the Light and Reflection of the Haq

If Allah (AJ) cannot be seen, then His proofs and signs must be visible. The greatest of His signs is Muhammadur RasulAllah ﷺ. He 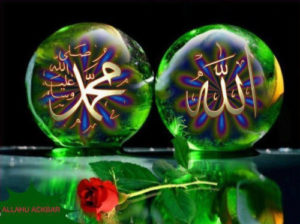 is Allah’s (AJ) Light and a reflection of the truth. Allah (AJ) in abjad value equals 66. The 66th name of Sayyidina Muhammad ﷺ is Haq! In Holy Quran, Surat al-Qalam, “Khuluq Azeem.”

Know that known things are four:

Finally there is the fourth known which is the man, Muhammad ﷺ, the khalif (representative) appointed by Allah (AJ) in this world 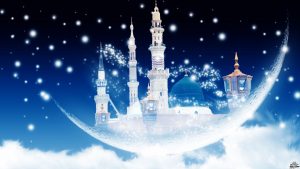 which is subject to him.

“And He has subjected/gave the authority to you [Sayyidina Mahmood (pbuh)], as from Him, all that is in the heavens and on earth: Behold, in that are Signs indeed for those who reflect/Contemplate [Meditate].” (The Crouching, 45:13)

Now understands that seeking Allah (AJ) and pursuing ma’rifah (gnosticism). Allah (AJ) will not be seen. Allah’s (AJ) Greatest of signs is to be witnessed. When one arrives to the the Divine Court, the Truth will be witnessed. That Truth is Muhammad RasulAllah ﷺ. 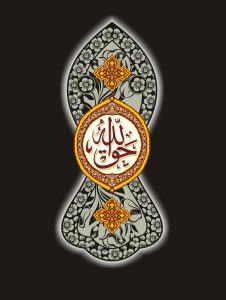