Home The Golden Chain Guides - RijalAllah (Men of God) What is Madad (Seeking Support), Do you Worship the Ka’bah?

(People who pray to Kabah), are they stone worshipers? But no – You know by studying your faith and studying your practices, it’s an isharat, it’s a sign that you merely direct

yourself to Kabah – but our worshipness is always to Allah (AJ). We’re not idol worshippers, and Prophet ﷺ didn’t fear for his nation idolatry. What he ﷺ feared the most was the hidden shirk (polytheism), not the visible shirk of thinking that this is going to be Allah and we are bowing down to it. [Hadith – Shirk Khafi]

So it means that everything shaytan wants is to create a confusion. So with the holiest of signs for us, Shaytan 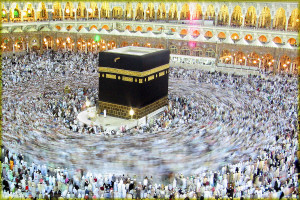 comes and says they are bowing to it. Prophet ﷺ is clarifying, Awliyullah are clarifying, Ahlul Sunnah wa Jammah scholars are clarifying that “no, no, no, you’re not bowing to that. Your worship is only for Allah (AJ), you’re merely using Kabah as a direction in which to unify the whole of creation. Everything must face the nucleus.” We find that truth even in an atom – in science. The earth is facing the sun; the electrons facing the nucleus. So we too face the center of our being, and worshipping only for Allah (AJ). Then they begin to clarify that everything has an ocean of understanding.

When you call upon the madad, it’s asking for the ulu amr (Spiritual Guides); that Allah (AJ) is telling us “You obey Allah – “Ati Allah, ati Rasul, wa ulu amri minkum.” (Quran 4:59) The Ulul amr, “wa kunu ma’as Sadiqeen,” that itaqala, “have consciousness of Allah (AJ),”wa kunu ma’as Sadiqeen” (Quran 9:119) , and “keep the company of sadiqeen.”

4:59 – “Ya ayyu hal latheena amanoo Atiullaha wa atiur Rasola wa Ulil amre minkum…“ (Surat an-Nisa)
“O You who have believed, Obey Allah, obey the Messenger, and those in authority among you… “(The Women, 4:59)

“O you who have believed, have consciousness of Allah and be with those who are truthful/ Pious /sincere (in words and deed).”  (The Repentance 9:119)

The Sadiqeen, and truthful servants, they are both living and are al Hayyu al 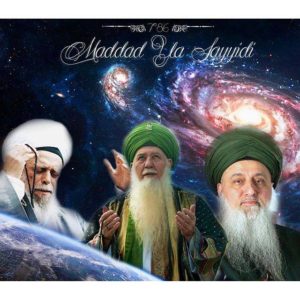 Qayyum (Ever-living and Self Subsisting). They are from the ones who are physically amongst you – you must keep their company in life – and spiritually, they are not dead in their graves. Allah (AJ) says it in Holy Quran and Prophet ﷺ described that they are alive in their graves.

“And never think of those who have been killed in the cause of Allah as dead. Rather, they are alive with their Lord, receiving provision.” (Famly of ‘Imran 3:169)

In Salah, we Give Salaam to Prophet (ﷺ ) and Ibadullahi Saliheen

So when we know that we’re not bowing down, but we’re asking to fulfill our deen,  where Allah (AJ) says “then you must be with ulu amr, you must “keep the company of pious people,” (Quran 9:119), whether physically or spiritually, that you must always be with them.  So what Allah (AJ) has you saying in your salat (daily prayer), before you close your salat? “As Salamu alaika…” We’ve said it many times, this is a corner stone of belief – that in the salat,

before you close the salat, “ you say “As Salamu Alaika Ayyuhan Nabi” ‘Peace be upon you O Prophet ﷺ’,  in present tense. Prophet ﷺ must then be in front of us looking at us, because you cannot say  “As Salamu Alaika” to back of his head (alayhi salatu salam), it’s not adab. Why Allah (AJ) would want you to be giving salatu salams to Prophet ﷺ’s back of his head? So you must be making your salat and Prophet ﷺ is looking at you, because you’re saying and giving your shahada. Why Allah (AJ) designed the salat like this, for you to say  “ As Salamu Alaika Ayyuhan Nabi, wa As Salamu Alaikum ya Ibadullahi Saliheen”  ‘Peace be upon you o Prophet ﷺ and Peace be upon all of you Pious/Righteous Servants of Allah’.  Even in the salat, Allah says you must be in the presence of Prophet ﷺ, and the ibadullahi salaiheen

Prophet ﷺ described “your prayer is that you should pray as if you see Allah (AJ), if you don’t see Allah (AJ), know that He sees you.” So means that the maqam of opening the heart and witnessing the heart, when the salat becomes real, you begin to witness what you are saying. That salat is real. 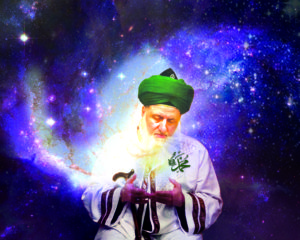 Now, tell me about spiritual excellence (ihsan).”
The Prophet (PBUH) replied, “It is to serve/worship Allah as though you behold/see Him; and if you don’t behold/see him, (know that) He surely sees you.” Prophet Muhammad (saws)

The people of ‘open heart’, when they make their salat, their heart is open and they witness Prophet ﷺ through their soul, they witness the pious souls of pious predecessors.

Run to the Cave of Safety, like Ashab Kahf (Sleepers of the Cave)

Then Allah (AJ) gives us many different examples in Holy Qur’an, that why Ashab al-Kahf (Sleeper of the Cave) and Surah Kahf (The Cave, 18th Chapter of Quran) is so important in the way of marifat? The cave represents the cave of Rahmah, and Ashab al Kahf is an eternal reality. That all your life – all our life – we have to run from ignorance and run towards Allah’s Rahmah (mercy). And this dunya always is under the kingdom of shaytan (devil), and we have to seek refuge with Rahman (Most Merciful). So then in that Surah, Allah (AJ) describes that “you must seek yourself into the cave so that I may sign, or may dress you, from Rahmah.”

“When ye turn away from them and the things they worship other than Allah, betake yourselves to the Cave: Your Lord will shower His mercies on you and disposes of your affair towards comfort and ease.” (The Cave)

Musa Kalimullah (as) asked for Knowledge and Followed Khidr (as)

And another important example in that Surah is the example of Sayyidina Khidr (as) and Nabi Musa (Moses) (as). That they’re beginning to teach that Kalimullah and the one who speaks to Allah (AJ), he’s still in need of something 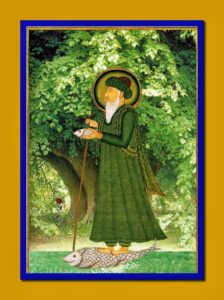 – so why Allah (AJ) not teaching Musa (as)   directly? He’s Kalimullah.  Because Allah (AJ) wants through humility that, “No, you are not the highest one. Just because you are Kalimullah, there are ones who have been taught from My Divinely Presence, who ‘attained a Rahmah’, and then ‘we taught him ilmalladuni’” (Quran 18:65). And then Nabi Musa was told to go where the two rivers meet, to meet one of those servants.

“So they found one of Our servant from among Our servants , on whom We had bestowed Mercy from Ourselves and whom We had taught [unseen/heavenly] knowledge from Our own Presence…” (Quran, The Cave 18:65)

All of this has to do with being in the company of Rijalullah, the people of the Divine. When you are asking for their madad, they’re not coming to be “Allah” for you, they’re coming with a blessing, with a Rahmah (mercy). That their light and their souls are open, and Allah (AJ) is with them, Allah’s hand is upon them, Allah’s nazar is dressing them,

“And whoever obeys Allah and the Messenger ﷺ are in the company of those on whom Allah has bestowed His Favours/Blessings – of the prophets, the sincere Truthful, the witnesses (who testify), and the Righteous, and excellent are those as companions. (Holy Quran, The Women 4:69)

Be Humble, Prophet Zakariya (as) Went to Maqam Sitna Maryam (as) for Du’a

Allah’s baraka is overflowing upon them, so much so that Sayyidina Zakaraiya (as) – he’s a Prophet and his dua is 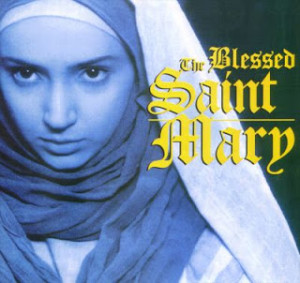 Means for us, there are all these signs of understanding, that Allah (AJ) wants for the believer be humble. Even you’re Zakariya (as), Sayyidina Zakariya making dua, dua, dua, never being accepted – to have a heart that’s humble enough that you go into a room, and this lady, her prayer and her worshipness is so accepted that he’s astonished that “where are you getting this food from? Where is this nemat coming to you from?” (Quran 3:37-39) He’s a Prophet; doesn’t he know where this nemat coming from? Immediately his heart knew out of humility, there is a secret here, he doesn’t have, and she has it. As a result of that secret, he was humble enough to make immediately his dua. Minute he made his dua, Sayyidina Jibrael appeared before him that “Allah giving you glad tidings, your dua was accepted in this maqam.”

“…Every time Zechariah entered upon her in the prayer chamber, he found with her provision. He said, “O Mary, from where is this [coming] to you?” She said, “It is from Allah . Indeed, Allah provides for whom He wills without account.(37) At that, Zechariah called upon his Lord, saying, “My Lord, grant me from Yourself a good offspring. Indeed, You are the Hearer of supplication. (38) “While he was standing in prayer in the chamber, the angels called unto him: “Indeed, Allah gives you good tidings of Yahya ( John), …” (Holy Quran 3:37-39)

Means for us all these signs that tariqa (spiritual path) comes to teach from the realities of Prophet ﷺ, that you put the whole package together and it begins to show its reality, and the amazing blessings that Allah (AJ) has in store for us everywhere, but we have to be humble enough to seek it. That we have to ask for the support of unseen souls. We have to ask to be in the company of pious people, and then the quest and the journey of the seeker begins. Where Allah (AJ) sends us to pious people to learn from them. Sends us to maqams and holy areas where Allah (AJ) accepts the dua in that maqam – and we don’t know why. Allah knows best. There may be a place you walk into and that dua is accepted there, for what Allah (AJ) wants to establish, and nobody can take away what Allah (AJ) wants to give; but the whole way is based on humility. The whole way is based on accepting that we are students and we’re taking a lifelong path of learning these realities and that Allah (AJ) open our hearts to receive more and more of these realities.

[Special thanks to our transcribers for their help with transcribing this suhbah.]