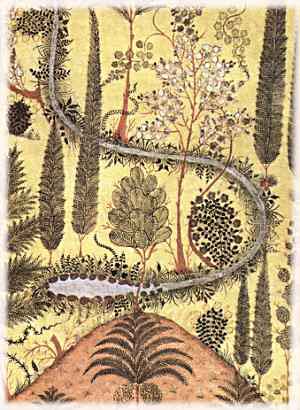 His blessings reached everyone in his time. He was a Special One (khas), carrying the Secrets of the Prophetic Descriptions. He sat on the Throne of Guidance, spreading external and internal knowledge, especially from the Divine Presence. He was a master of this Order. He was distinguished among the Knowers. He was a Supporter of the weak. He had great miraculous power, that was visible wherever he went.

and his spiritual inheritor. He was very handsome, and he resembled the Prophet

according to the description of the Prophet

in the sirah(Life-Story). He authored a book entitled “Ya waladi”, “My Son,” in the tradition of Imam Ghazali who wrote “Ayyuha-l-walad”, “O My Son.”

The village of Kikunu, in which he grew up, was a spiritual place. The villagers kept the sharacah and all of them followed Shaykhs. One day before his birth, Shaykh Abu Ahmad as-Sughuri (q) passed by the village and he said, “From this village an enlightened child is going to appear. His light will shine from earth to heaven. He is going to be a great saint.” He was predicting the birth and high station of Sayyidina Abu Muhammad al-Madani (q).

Daghestan in his time was known as “the Land of Saints.” During his early years, two great Shaykhs were living there, Shaykh Muhammad Effendi al-Yaraghi (q) and Sayyid Jamaluddin al-Ghumuqi (q).

One time, before Shaykh Muhammad al-Madani (q) took the Naqshbandi Order, Hajji Nuri and  Hajji Murtaza passed by his village and they told him, “We are going to visit Ahmad as-Sughuri to take bayah from him. Would like to come with us?” He said, “Yes,” and all three of them made intention to take the tariqat from Sayyidina Ahmad as-Sughuri (q).

One day there came a drought to their village. The people of the village asked them to pass by the village of Abu Muhammad al-Madani to ask him to pray to Allah for rain. On their way to see him they said to each other, “We will know now if he is truly a saint and why Sayyidina Ahmad as-Sughuri put him ahead of us.” On their way they passed a house, and saw a beautiful lady inside. They were so attracted to that lady’s beauty that they stood looking at her for a long time. Finally they arrived at Abu Muhammad’s house and they knocked at the door.

From inside, he said, “Who is at the door?” They were speaking with each other in low voices saying, “How could he be a Shaykh when he doesn’t know who is at his door?” They knocked again, but there was no answer. Then from behind the door came his voice, ” Hajji Murtaza and Hajji Nuri, it is easy for someone to become a Shaykh and a guide without knowing who is behind the door, but it is very difficult for someone to become a Shaykh and a guide who is following his desires in a way that is not acceptable, looking at naked women.” He said to them, “I cannot allow you inside my house.”

In their hurry to leave, they forgot to tell him that they had come to ask him to pray for rain. After five minutes he came running behind them and told them, “As for what you came for, as soon as you reach your village it will be raining.” As soon as they reached the village, the clouds gathered and it began to pour down rain.

The Russians were so afraid of him and his miraculous power that they took him to Siberia with the intention of killing him. He was able to free himself and escape to Turkey. The people of Daghestan remember well how hard he fought the Russians, both physically and spiritually. Even the Russians used to speak about his courage and his spiritual miracles. Many of the events that are known about him were recorded by his enemies.

One time he was fighting the Russians, until they came in overwhelming strength against him. He escaped to a house, and no one knew he was there. A woman saw him from the roof of her house. She told the Russians, “Muhammad al-Madani is in that house.” They came to capture him. The found that the house he was hiding in was surrounded with green grass because of the blessings of his presence, although due to the heat of summer there was no green vegetation to be seen anywhere else. Thanks to the information given by the woman, they were able to capture him. That night the woman became very ill, and the next day she was dead. As Allah Almighty and Exalted revealed to the Prophet

in the holy Hadith, “Whoever comes against one of My saints, I will declare war against him.”

They put him under house arrest, and told him he could go to a nearby restaurant to eat. He refused to eat in their restaurant and he never ate their food, saying, “You are my enemy and I will never eat your food.” He did not eat their food for months, and they did not know how he was surviving. Finally someone came from the State of Sartar, saying to the governor, “If he is not eating from your food, give him to me, I will take him to my country to care for him.” They sent him there.

There was a boy from Kikunu studying in Bukhara who was engaged to a girl from Sartar. He was studying the sharaca. He had been gone for many years and had not returned. In the meantime, that girl had decided to marry someone else. The news of this reached Bukhara, where the boy heard it. He was very upset. That night, before he fell asleep, he heard a voice saying, “Come back to Sartar. Come back to Sartar.” He heard that voice the next night and the following day. He decided to go back. He had a very long journey, nearly to Moscow, to reach Sartar. He walked and walked until he finally reached the village.

He found the people all gathered in one place, carrying food. They told him, “A great Shaykh has come to Sartar from Kikunu, and he is healing people and feeding the poor. We were so attracted to his spiritual powers that we have all become his followers. Come with us to see him.” He went with them. The people of the village said to the Shaykh, who was Sayyidina Abu Muhammad al-Madani, “You might be taken away by the Russians. Please leave someone here who will be authorized to guide us in the tariqat.” When that boy arrived at the house of the Shaykh, the Shaykh told him, in the same voice he had heard in Bukhara, “O my son, you heard our message, you heard our voice. Come! You are going to be my deputy and you are going to teach these people what they need of spirituality and of the obligations of religion. And you are going to marry your fiancée.” The boy was very happy. He took initiation from the Shaykh in the Naqshbandi Order and the other five tariqats. Shaykh Abu Muhammad al-Madani married him to his fiancee.

This was a miraculous gift for the city of Sartar, from Abu Muhammad al-Madani. It was also a sign that his days in Sartar were ending. The next day, the Russians came to take him to Siberia. He was locked inside a high security prison. Though they locked him in his room, they would often find him in the yard, praying, sitting, or reading. The guards were surprised and took him back. Then after after a few hours they would find him outside again. So they chained him to the wall. Still they found him outside the room, walking with someone. Later he would tell people, “I was walking with Sayyidina Khidr (s). They again chained him up and again they found him outside his cell. They were so upset that they wrote to Moscow asking advice on how to hold him. Moscow told them, “Put him underground in a very deep prison.” They tried to do that, but no matter how far down they put him he would always be found outside his cell. Finally they were so fed up with his escaping that they allowed him to go free within the borders of Russia. His intention was to escape to Turkey.

When they left him free in Siberia, he saw an officer and told him, “My son, I will see you in Istanbul, Turkey. We will meet you there.” Later that young man got fed up serving in the Russian Army and deserted. With his family he fled to Turkey, and ended up in Istanbul. There he met Shaykh Abu Muhammad al-Madani, as the Shaykh had foretold.

Sayyidina Muhammad al-Madani decided to pass through his homeland in the Caucasus to visit his parents and family on his way to Turkey. One day before

Secrets of Adam same as Atom