Question: We would like to know if the dajjal is human, from the children of Sayyidina Adam (as), or is he demonic entity with no human origin?

Shaykh Nurjan Mirahmadi: They describe that he’s of a jinn nature and that he has and will appear as in a human form but he’s of a jinn nature. The appearance of dajjal, the appearance of dajjal, is he of a human nature or demonic nature? But he’s of a jinn nature and he is going to appear in a human form. Already his government is established and his way is all over the Earth and his apparent sign is the bulging of his eye. And we’ve discussed that in other videos and they can search that on the NurMuhammad.com and on the website has articles on dajjal and the reason why the eye is bulging and is deficient. 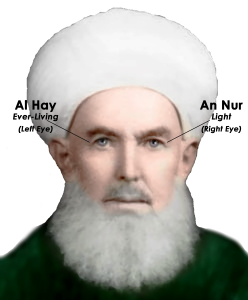 And the symbolic of Insan al Kamil, and the perfect human, is the symbol of Sayyidina Muhammad ﷺ in which the nur (light) and hay (The Ever-Living) and the attributes of Allah (AJ) in which to dress the servant with a nur [Shaykh refers to right eye] from the oceans of Allah’s (AJ) Divinely lights; a light for their soul in which the light and the eyes of Prophet ﷺ dresses the servant from the oceans of nur in which to give their soul an eternal light. And, as a result of that nur, he ﷺ dresses them with the eye of Al-Hayat (ever-living) [Shaykh refers to left eye] and that they reach to the eternity and to the reality of their eternity.

Dajjal’s Disclaimer: “I Have No Light” 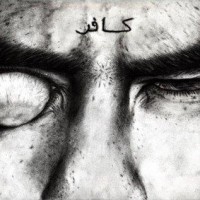 And the dajjal, his eye is deficient in which he has no light and that’s why he covers that eye. Because he has to give his legal disclaimer to his followers too. ‘I have no light and I promise you nothing from heaven and all that I ask is that you have the hayat al dunya, that you live the funnest life that you can imagine on this world.’ And then they have expressions like, ‘Live life like there is no tomorrow’ because there is no tomorrow for them. They have sold their soul for a small price. So, everything that dajjal and shaitan (satan) does has a disclaimer because they fear Allah (AJ) and the day of reckoning. And their disclaimer will be, ‘I told them I have no light.’ And that’s why Prophet ﷺ, ‘Anyone come to you and say that they’re your lord and is deficient, your Lord has two eyes.’

Narrated Anas (ra): The Prophet (pbuh) said, “Allah did not send any prophet but that he warned his nation of the one-eyed liar (Ad-Dajjal). He is one-eyed while your Lord is not one-eyed, The word ‘Kafir’ (unbeliever) is written between his two eyes.” (Sahih al-Bukhari 7408)

Servants of Allah (AJ) are Dressed With Divinely Lights 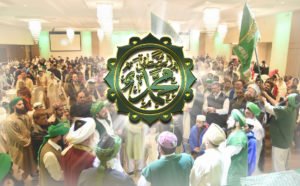 It means that your Lord’s dress upon His servant must have a nur and must have oceans of Al-Hayat and the oceans of eternity. The servant of Allah (AJ) dresses them with the oceans and the lights. Their speech have lights, their teachings have lights, their associations have Divinely lights, and as a result, Allah (AJ) dresses them from eternity oceans in which they drink from these powers of eternity and their souls are becoming from eternal realities of the reality in which Allah (AJ) is dressing them and blessing them.

Dajjal System Pulls Your Heavenly Light to Darken the Heart 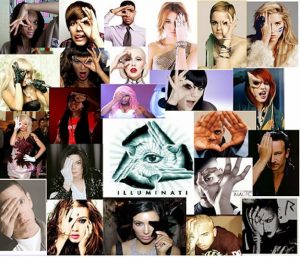 And the dajjal system is to take away all light. So every action that they provide for people is to pull your Divinely light and take it away in which your heart becomes completely darkened. His zikr people and his crows – because they’re not bulbul – they don’t sing good they don’t sing nice; his agents are crows. And when the crow puts up its sign and goes like this [Shaykh refers to a triangle over his eye] it means he’s telling you that he’s going to pull all the light from your soul and instead he’s going to throw into you the desire of hayat (life) which is called hubb e dunya – the love of dunya (material world). 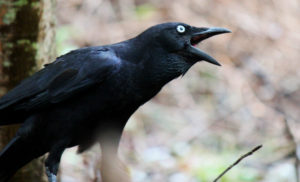 The more you listen to his crows – and there’s a band called ‘The Crows’ – because anyone who hears a crow, they want to throw a rock at them. It’s such a horrible sound that they’re making and such like an evil creature; it doesn’t represent good things. And that’s the dajjal system. So they think that these people are singing and nice but these are the crows for dajjal and their purpose for dajjal is to pull the lights of insan (human being), darken the heart. Because when they hear these songs and these bad words and bad melodies and bad everything, it’s an energy meant to pull out the light from the heart.

As a result, it pulls light and light and light out until their other eye [Shaykh refers to left eye] begins to push in the desire of dunya. And that’s why then all their videos with this crazy lifestyle that they live and then the people will have so much desire for dunya, and an inability to even achieve that desire, and that’s exactly what shaitan wants. He wants everyone to have such a desire that they don’t even have an ability to achieve it. 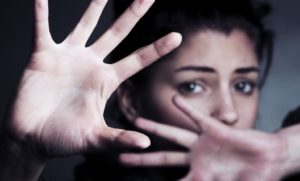 And now in eastern parts of the world, like in India where cultures were a little bit more conservative, the dajjal system of putting desire, desire, desire has led to what? Uncontrollable attacking of the opposite sex! Because they’re pushing a desire upon people that they don’t have the ability to achieve. So what shaitan then says, ‘Go and take it.’ So as a result people are now out doing things that they’re not supposed to, attacking people. They have no limit and inhibitions to stop. 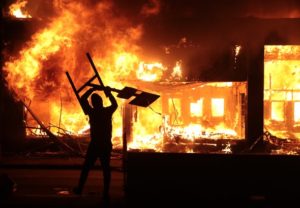 And in the western side of the world, same. They’re putting their desire, desire, desire until a day comes in which they tip and they break and they run out onto the streets trying to take whatever they want. And the police will be nowhere to be found; they’re already firing the police. You hear these words on the news that, ‘Fire the police, fire..’ This, the shaitan is saying that. So that there are no police and you’re left with a people who only, what they’ve been built up of their satanic desire will be left on the streets taking and doing whatever they want.

We pray that Allah (AJ) dress us, bless us, and protect us. That from whatever plan shaitan has, it already was a plan through Allah (AJ). That Allah (AJ) already wrote that whole destination and determine for those whom love Allah (AJ), love Sayyidina Muhammad ﷺ, He granted them a najat (salvation) and a means and a way to survive these days of difficulty through good character, inshaAllah.