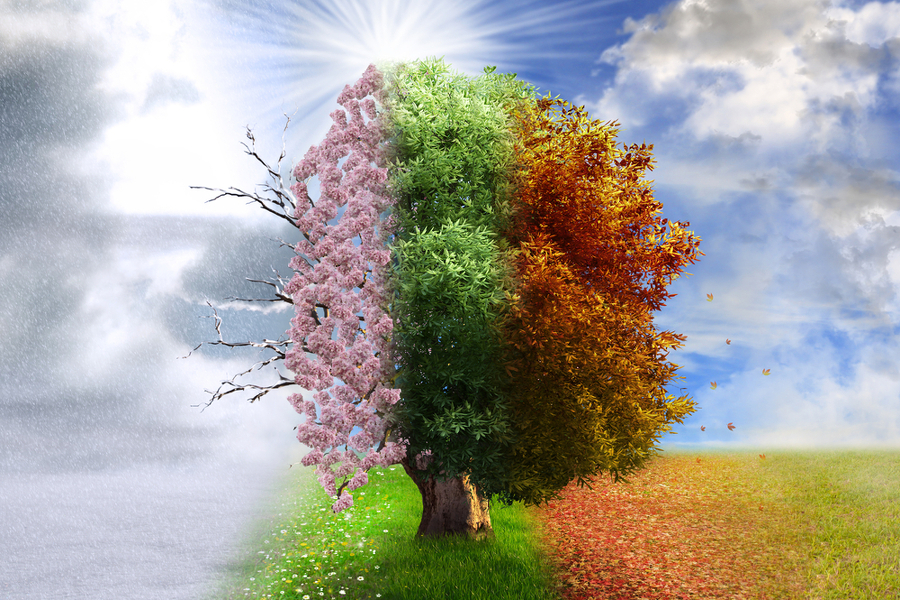 Colours and The 4 Seasons

Of the Lataif ul Qalb – Levels of the Heart [First station of the heart, Qalb is yellow and represents the season of summer]. Yellow has the reality of the height of life and the excitement of life.

You go from the season of summer to red [2nd Station Sir]. The importance of red becomes the understanding of 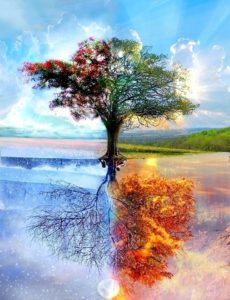 fall. That in the height of life, the coming of fall is a preparation for nature in the state of death. So whether it’s one day or one year, or cycle of life, Divine is teaching you it’s all the same. Everything is moving within that same reality that: from summer time, everybody is happy, that is a season of one year. Then you come to fall; as soon as things become red, it’s showing us it’s preparing for death. Red is symbolic with war, with death, with the process of dying.

Then through this hourglass, you are going to pass the black. Black is a state of no colour, no more existence, because the understanding of colours is that you see only what element was reflected out; the rest is absorbed in. You see yellow, yellow is what is left out; the rest of the colour spectrum went in. So that is the understanding of colours. But when you get to black everything went in. For us that means the state of death, that that is the time of non-existence. So in the reality of the season, from fall coming to winter, there is a secret of death.

Then come into the white, and the reality of white has to do with the preservation of life. The Divine is teaching us that winter is a state of preserving. We are trying to understand ourselves, so the Divine begins to teach to, ‘Look upon the horizon and look upon yourself.’

“We will show them Our signs in the horizons and within themselves until it becomes clear to them that it is the truth…” (The Night Journey 41:53)

Don’t think that I can’t preserve you and resurrect you; I’m doing it all around. Look at your summer, you are enjoying yourself; all of a sudden fall, all the trees are turning red and they are dying. They enter the state of death and by winter they are in a preservation.

So white is to preserve; white is symbolic of that once you are in the state of death and the purity of death. That’s why all of our eastern traditions is white. Means you passed the death and now you’re in the ritual purity of white. So many traditions, they bury with white because you are like in a heavenly state.

because in nature, as soon as winter snow goes, means comes now spring. From those same trees come now the next colour, green [representing] Spring [4th Station of Khafa].

Spring is the reality of resurrection, that the rains of April and the reality of spring, is Divine shows that with that Divinely water that falls from the sky, everything is resurrected. So then the plant, the trees that look like they were dead to us before, they are resurrected with these lights.

A Sign for them is the earth that is dead: We do give it life, and produce grain from it, of which you do eat.” (Holy Quran, YaSeen 36:33)

Black has to do with the state of annihilation, that if you died and annihilated yourself, you shouldn’t be having an existence, you shouldn’t be reflecting anything of yourself, of your character, of your personality. Then the black, is being the highest point; means that the highest point is to enter into the Divine with no characteristic, with no identity, to be nothing, to be annihilated in Divinely Presence.

The Colours of the Lataiful Qalb are Intermixed

Then there are tremendous realities of the colour white, the purity of the state of death. Green has to do with the power of resurrection, the beauty of spring and how the Divine brings everything back to life.

[These are all intermixing colours; it’s not just one colour. The yellow has infinite dimensions of colour when it begins to touch the red, when it begins to touch the black, it is touching the white. Inside it’s also touching the green. Means the phases of these colours are the lights of the soul, begin to teach that: fall passes death and becomes winter. Then as soon as winter is finished, it enters spring and everything comes back to life, InshaAllah.

? Open the Sun within Your Heart. Allah will fill it with Heavenly Qudra. InshAllah Sufi