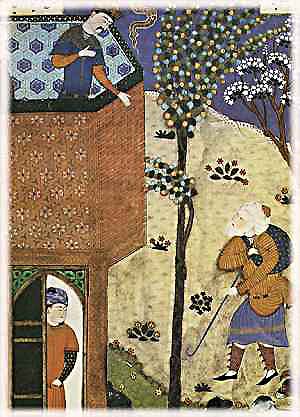 “O Sayyid! A gnostic of high degree used to say,
‘Being a dervish is to correct the imagination.’
In other words, nothing other than the Real
should remain in the heart. In truth, he spoke well.
O Sayyid! Since the veil is nothing but imagination,
the veil must be lifted through imagination.
Night and day you must dwell in imagining Oneness.”

He was the Knower, Annihilated in God (fana billah) and Existing in His Existence (baqa billah), who was lifted to the highest station of Vision. He was a Secret of Allah’s Secrets and a Miracle of Allah’s Miracles. He combined in his person the two types of knowledge: the Outer Knowledge and the Heavenly Knowledge. God gave him from the two Oceans, and conferred on him Authority in the two worlds of men and Jinn.

Imam Rabbani Ahmad al-Faruqi (q) said, “Muhammad al-Baqi was the One Sitting on the Throne of all Shaikhs, and he was the Deputy of all Masters of the Naqshbandi Golden Chain, who reached the end of the Infinite, who achieved the highest states of wilayat (Friendship of God). He was the qutb (Spiritual Pole) who supported every creature on this earth. He unveiled the secrets of Reality. He was the Verifier of the Station of the Reality of Muhammad

. He was the Pillar of the People of Guidance. He was the Essence of the Knowers and the Guide of the Verifiers (muhaqqiqin).”

He was born in 972 H. in the city of Kabul in the land of `Ajam which was a colony of the Sultanate of India. His father was the judge Abdu-s-Salam. He went to India in the first instance on personal business. There he was attracted to an attraction from God’s attraction. He left this worldly life behind and sought spiritual knowledge from the Master of the century. He kept company with masters and saints, until he himself became an ocean of intellect and a saint of spirituality. He traveled continuously until he reached the city of Samarqand. There he connected himself to the Master of his time, Muhammad Khwaja al-Amkanaki (q). He received from him the Way of the Naqshbandi Order. In a very short time he received what most seekers require a lifetime to receive. He was elevated also through the spiritual care ofUbaidullah al-Ahrar (q). His honor became known everywhere. His shaikh, Muhammad Khwaja al-Amkanaki, authorized him to take followers and to train them in the conduct of the Order. He ordered him to go back to India. He predicted, “You are going to have a follower who will be like the sun.” This would be Imam Rabbani Ahmad al-Faruqi (q).

He moved back to India and stayed in the city of Delhi-Jahanabad, which he filled with faith and knowledge and secrets and lights. Through him the Naqshbandi Order was spread with great swiftness throughout the Indian Subcontinent and millions of people were connected to him through his deputies. All nations in the Subcontinent were attracted to his knowledge and his Heavenly Power and to the Prophetic Characteristics dressing him. It became known throughout the Indian Subcontinent that anyone coming to him and looking in his eyes, or sitting in his association doing dhikr, would enter a state of Self-Effacement, through which he could reach a state of Annihilation, in a single meeting. By this miraculous power he attracted millions of people, until this Naqshbandi Order was on the tongue of every person in his time.

He passed the Secret to his successor, the Shaykh of this Chain, the Reviver of the Second Millennium, al-Imam ar-Rabbani Mujaddid alf-ath-Thani, Shaykh Ahmad al-Faruqi as-Sirhindi (q).