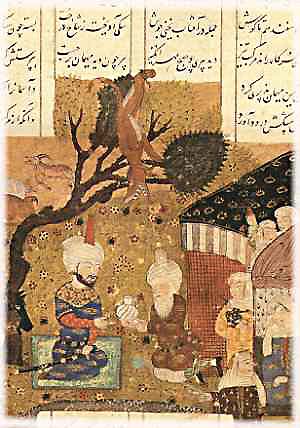 “My illness is that I no longer care about my illness.
O Remedy of my illness — it is You Who are my illness.
For a time, I repented; but since I’ve known You,
My repentance became lost in You.Your coming near is now like

Your growing distant.
When shall rest come?”

He was the Perfection of the Pious, the Genius of the Guides, the Essence of Sainthood. Upon him was bestowed the Godly Khalifate (al-Khilafa al-Rabbaniyya), and the Spiritual Kingdom was his shelter. He combined in his person the Heavenly Knowledge and the Sharaca Knowledge, and he grasped the best of the tariqat and  haqiqat, until he became the locus of all Heavenly Revelations and Inspirations. In him appeared the Knowledge of Spiritual Knowers. He is known as the Unique One in Knowledge and in the Use of the Pen. He carried in his heart the secrets of attracting the hearts of people. Praise belongs all to Allah who established in him the Heavenly Revelation, and who gave him miraculous power in every important matter. He adorned him with the Perfect Light of Muhammad

“I served my Shaykh for 12 years until he died, from 883 to 895 H. The cause of my connection and my initiation to him occurred one day when I went with a companion, Shaykh Nicmatullah, from Samarqand to Herat for the sake of furthering our education. When we reached the village of Shadiman, we stayed there many days to rest because it was the hot season. One day Shaykh Ubaidullah al-Ahrar came to the same city, and we went to visit him at cAsr time.

“He asked me where I was from. I said, ‘From Samarqand.’ He was speaking to us in the finest manner. Through his speech, he revealed all the private matters that were in my heart, piece by piece, until he told me why I was travelling to Herat. That was so amazing that it made my heart connect with him. He said to me, ‘If your goal is to seek education and knowledge, you can find it here, there is no need to go to Herat.’ I acknowledged that every petty gossip and every inspiration that were in my heart were as open to him as the pages of a book; even so, I was still intending to go to Herat.

“One of his followers who was unhappy with my intention said, ‘The Shaykh is busy writing, you can go.’ I did not go but waited until the Shaykh came back again. The Shaykh came back and said to me, ‘Now tell me your real story. Why are you going to Herat? Are you going in search of the spiritual path or are you going there to seek external knowledge?’ My friend replied on my behalf, ‘He is seeking spiritual knowledge, but he is using the pursuit of external learning as a cover.’ He said, ‘If that is the case that is good.’ Then he took me in his private garden and we walked together until we disappeared from the sight of the people. He took hold of my hand and I immediately entered the state of Self-Effacement (fana’) for a long time. I understood he was connecting me to his Shaykh, and from him to his Shaykh, and from him to his Shaykh, all the way to the Prophet

and from the Prophet to Allah, Glorious and Exalted.

“He then told me that I will be able to read and understand his writings. He wrapped them up, gave them to me, and told me,

‘In them is the reality of worship through obedience and piety and humbleness. By means of this paper, if you follow it, you will realize a vision of Allah, Almighty and Exalted.

‘This Way is based on the love of God, which is based on following the footsteps of the Prophet

, which, is based on knowledge of his Sunna. The Prophet

‘You must keep away from corrupt scholars who use religion as a means to collect the pleasure of this dunya and to acquire fame and position. Avoid the Dancing Sufis, who are like children, irresponsible. Do not listen to those who speak without understanding about all kinds of nonsense, about halal and haram(the Lawful and the Unlawful) without ever speaking of the importance of not deviating from the beliefs of Ahl as-Sunnah wal-Jamacat (the Community of the Way of the Prophet

‘Do not listen to the arguments of the philosophers and the people who understand nothing of Tasawwuf except its name, and yet pretend to be Sufis. May Allah, my son, greet you with the greetings of Islam.”

“He then went back to his association, read Fatiha for me and gave me permission to go to Herat. I left his presence directing myself to Bukhara. He sent after me a messenger with a letter addressed to the Shaykh Kallan, son of Mawlana Sacd ad-din al-Kashgari. In it was written, ‘You have to look after my son who is carrying my letter and to keep him from mixing with bad scholars.’ When I saw that lovely gesture from him, my love for him deepened in my heart. Yet I didn’t go back to him, but continued to Herat.

“The way to Bukhara took a long time, because my mount was weak. I had to stop every one or two miles. I had gone through six donkeys by the time I reached Bukhara. When I finally arrived, my eyes became afflicted and I was unable to see for many days. When my condition improved and I prepared to leave for Herat, I came down with a high fever. I was so sick that it came to my heart that if I continued I might die. I decided not to travel further but to go back and serve the Shaykh.”

“After I reached Tashkent, I decided to visit Shaykh Ilyas al-cAshaqi. I left my books, my clothes and my animal with a caretaker. One of Shaykh cUbaydullah’s servants saw me on the way. I said, ‘Let us visit the Shaykh.’ He asked, ‘Where is your animal? Bring it to my house and then we will go to visit.’ As I was going to retrieve my animal, a voice came to me saying, ‘Your animal is dead, and all that is on it has disappeared.’ A great confusion came over me. I realized that the Shaykh was not happy with my planned visit to Shaykh Ilyas. The thought came to my heart, ‘Look how my Shaykh is directing all his power to lift me up while I have decided to visit someone else.’ I decided not to visit Shaykh Ilyas al-‘Ashaqi but instead to go directly to Shaykh cUbaidullah al-Ahrar. When this came to my heart, a man came to me and said, ‘We have found your animal with all your possessions on it.’ I returned to the person with whom I had left the animal and he told me, ‘I tied your animal here, and when I looked up, it had disappeared. I looked everywhere. It was as if the earth had swallowed it up. Then I returned again, and there was the animal, right where I had tethered it in the first place.’ I took my animal and set off to Samarqand to Shaykh cUbaidullah al-Ahrar (q). When I arrived he came out saying, ‘Welcome, welcome.’ I stayed with the Shaykh and never left him until he left this world.”

He had perfect belief. He accepted whatever his Shaykh taught him and nothing anyone could say would change that belief. He said,

“My Shaykh used to speak about spirituality and secret knowledge. He would always direct his speech towards me and ask me, ‘When you hear me speak about Divine Realities, does it cause any conflict in you with regard to the beliefs which you got from your parents and your teachers and scholars?’ I said, ‘No my Shaykh.’ He said, ‘Then you are one to whom we can speak.'”

“One day my Shaykh was sick and he ordered me to get a doctor from Herat. Mawlana Qassim came to me and said, ‘O Muhammad, make your travelling very quick coming and going, because I can’t stand for the Shaykh to be sick for long.’ I traveled quickly and returned with the doctor but I found that the Shaykh was well and Mawlana Qassim had died. My trip had taken me thirty-five days. I asked my Shaykh, ‘How did Mawlana Qassim die when he was so young?’ He said, ‘When you left Mawlana Qassim came to me and said, ‘I am giving my life for your life.’ I told him, ‘O my son, don’t do that, because so many people love you.’ He said, ‘O my Shaykh I didn’t come here to consult you. I have made the decision and Allah has accepted it from me.’ No matter what I said, I couldn’t change his mind. The next day he became sick with the sickness I had, which was reflected on him. He died on the 6th of Rabi’ul Awwal and I was immediately well, without the need of a doctor.'”

Shaykh Muhammad az-Zahid died on the 12th of Rabi’ul Awwal, 926 H/1520 CE in Samarqand. He passed his secret to his nephew, Shaykh Darwish Muhammad as-Samarqandi (q).