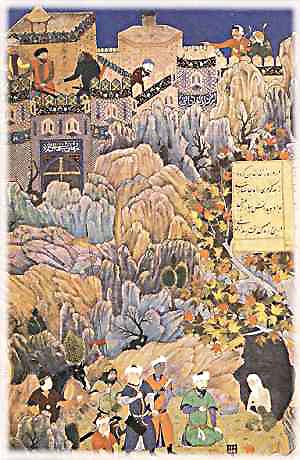 May Allah Bless His Secret and Sanctify His Soul

“I never ceased to stand, because of Your love,
on a station where minds are bewildered.”
Abul-Hasan an-Nuri

He was a Pious Imam respected by everyone. He brought out the treasures of Knowledge and its delicate Code of Behaviour and Rules. His many sayings were a Guidebook to the ways of the seekers. From his forehead the Light of Heavenly Knowledge shone forth. He was very brave in the fight against the Russian imperialists in his time. He had True Piety and a very pure Faith. He was humble towards everyone. He bore the signs of Perfection, having put his ego under his control. He encouraged people to follow the Naqshbandi Sufi Way and to support it on their tongues and with their actions and in their hearts. He was a Garden full of Roses from which the bees would gather the nectar and produce the finest honey. People ran to his threshold to attain the happiness of this world and the Hereafter.

He was in himself a Sign of Miraculous Power in knowing the secrets of the hearts of his followers, and in showing them the way to reach the Perfect State of Divine Love. He was a Great Sufi, a Knower known in all the nations surrounding Daghestan. His fame was spread from to Turkey, Persia, and throughout the countries of the Arab world. His heart was filled with sincerity and the easiest and purest spirit. He studied the external in addition to the internal knowledge. He was a scholar of Qur’an and Hadith, and he mastered the Science of Jurisprudence. He was learned in Chemistry, Astronomy, and Logic. He was a reference in every science.

He trained his murids, who numbered in the thousands. During the day he taught them military strategy for fighting the Russians, and during the nights he taught them spirituality. He rarely slept, not more than two hours a day. His food was often only water, and his clothes consisted of a single woollen robe. He was familiar to all throughout Daghestan. He lived in the time of the infamous tyrant, Shah Shamus, Governor of Daghestan.

He was tall, fair-complexioned, his beard was white and his eyes were green. His voice was soft.

He used to say,

“If the Lovers of the One were to speak about their Love for Him, from that description every lover would die.” [Mawlana Muhammad Effendi al-Yaraghi]

“The seeker (murid) doesn’t want anything for himself except what Allah desires for him, and he doesn’t need anything from the universe except his Lord.” [Mawlana Muhammad Effendi al-Yaraghi]

“If a seeker says after five days of fasting, ‘I am hungry,’ he is not fit for our Way.” [Mawlana Muhammad Effendi al-Yaraghi]

“Depression in the heart is from three sicknesses: loss of harmony with nature; keeping the customs one has been raised with that are contrary to the ways of the Sunnah; and keeping the company of corrupt people.” [Mawlana Muhammad Effendi al-Yaraghi]

“When the hearts despaired of visualizing the Essence of Allah, He sent them His Attributes. They were calmed and quieted and they were happy.” [Mawlana Muhammad Effendi al-Yaraghi]

“Examining is for the eyes. Witnessing (mushahada) is from the heart. Unveiling (kashf) is for the Secrets (asrar) of vision.” [Mawlana Muhammad Effendi al-Yaraghi]

“When is Allah not happy with his Servant? It is when His servant becomes annoyed at the length of the gathering of Dhikr. If his love for Allah were true, it would be like the blink of an eye.” [Mawlana Muhammad Effendi al-Yaraghi]

“Death denies happiness to the one who loves the worldly life (dunya).” [Mawlana Muhammad Effendi al-Yaraghi]

“The love of the Believer is a light in his heart.” [Mawlana Muhammad Effendi al-Yaraghi]

“Islam is to surrender your heart to your Lord and not to harm anyone.” [Mawlana Muhammad Effendi al-Yaraghi]

As a sign of his humbleness he used to say, “If someone were to call out in the mosque, ‘Let the most corrupted person leave,’ I would be the first to go.'” [Mawlana Muhammad Effendi al-Yaraghi]

“Whoever comes to Allah with his heart, Allah will send the hearts of all His servants to him.” [Mawlana Muhammad Effendi al-Yaraghi]

“I see in men Allah’s handiwork, but their false idea of themselves makes them blind to this vision; and I hear from them an endless dhikr of praise of the Creator, but their ears are deaf to it.” [Mawlana Muhammad Effendi al-Yaraghi]

“Whoever wears the woollen clothes in humbleness, Allah will raise him up and shine light on his heart. Whoever wears it in arrogance and pride, Allah will put him down.” [Mawlana Muhammad Effendi al-Yaraghi]

A scholar who was jealous of Shaykh Yaraghi’s fame and wished to destroy his reputation went to the Governor of Daghestan, Shah Shawus, and claimed that Shaykh Yaraghi was actually mixing the sexes. The scholar told the governor: “That man is destroying the shariah,” even though Shaykh al-Yaraghi (q) was well-known in his time for his strictness in maintaining the shar`ah and the Sunnah. That scholar tried to pressure the governor to put him in jail. The governor sent a messenger to Shaykh Muhammad Effendi al-Yaraghi (q) with a letter. The Shaykh read the letter and then he said to the messenger, “Wait! I am sending a gift to the governor on the condition that he doesn’t open it until the day of my appearance before him.” He went into his room and came out with a box which he gave to the courier.

The governor received the box and he felt a fear at the thought of opening it. On the day of the hearing Sayyidina Muhammad Effendi al-Yaraghi (q) arrived with all his followers. When he entered, the governor stood up. The people saw him standing and knew that something had happened, as he was not in the habit of standing for anyone.

The Shaykh said, “Open the box!” He opened the box and he found a letter in it. Under the letter was charcoal, burning intensely. Under the charcoal was a piece of cloth, completely unaffected by the coals. Under the cloth, there was gunpowder. He said, “Read the letter!” He opened the letter and began to read it out loud: “To the governor. Although the charge brought against us is untrue, nevertheless we ask: Can the one who is keeping a box full of burning charcoal which has been lying on gunpowder for one week…,” at which point the governor began to shake. The Shaykh told him, “Don’t tremble. Read on.” The governor continued, “…which has been lying on gunpowder for one week without any harm or explosion, is he not able to keep his murids, men and women, from exploding with the fire of passion?”

One time a woman brought her son to him. He was four months old. He called the child and, to everyone’s astonishment, the child walked to him. He told the child, “Read after me,” and he repeated Ikhlas (Surah 112) after the Shaykh. He told him, “Read it by yourself,” and the child read it by himself. The one reporting the incident said, “I saw that child 30 years later, and he showed the same great intelligence at that time as he had in front of the Shaykh.”

Leslie Blanch avers in her book, “Sabres of Paradise,” that Shaykh Muhammad Effendi al-Yaraghi was the Shaykh of Imam Shamil an-Naqshbandi. During their war against the Russians, he directed him in strategy and tactics, as did Sayiddina Jamaluddin al-Ghumuqi al-Husayni after him.

In Chapter 34 Gammer says of the shaykh, in his book, “Muslim Resistance to the Tsar…”:

“… While the glittering circle of Russian bayonets closed in on every side, Mula Muhammad [al-Yaraghi]’s influence had been growing steadily year by year. Intangible, immaterial, it passed surely and silently through the hedge of bristling steel as a miraged ship through opposing cliffs, or as a moss-bog fire creeps up against the wind. The two forces, material and moral, moving in concentric rings of opposite direction, kept equal pace, and just when to outward seeming the last spark of liberty was trampled under foot in Central Daghestan by the soldiers of the tsar, the sacred flame was ready to burst forth and illuminate the land on every side, even to its outermost borders.” “The Russian sources claim unanimously that Muhammad al-Yaraghi and his disciples preached jihad against the Russians from the very beginning. This would not be surprising…..Furthermore, the role of sufi ta’ifas, and especially of the Naqshbandiyya, in jihad movements all over the Muslim world has been emphasized. …[due] to the influence of Muhammad al-Yaraghi’s preaching.” “…The first concern of Muhammad al-Yaraghi and his disciples was to establish and enforce the shari’a and eradicate the ‘adat. [prevailing customs]”

The Shaykh addressing the mountaineers of the Daghestan said,

“you are neither Muslims nor Christians, nor pagans… the Prophet ﷺ said: ‘he is a true Muslim:…who obeys the Qur’an and spreads my shari’a. He who acts according to my commandments will stand in heaven higher than all the saints who preceded me”…”Vow, O people, to stop all your vices and henceforth to stay away from sin. Spend [your] days and nights in the mosque. Pray to God with zeal. Weep and ask Him for forgiveness.” [ p. 44]

He died on the 17th of Muharram, a Wednesday, in 1265 H./1848 C.E. He authorized his successor, Sayyid Jamaluddin al-Ghumuqi al-Husayni (q) to carry on as the Master of the Tariqat, with the Secret he had been given by their common Shaykh, Sayyidina Ismail ash-Shirwani, and as he had been ordered by him.