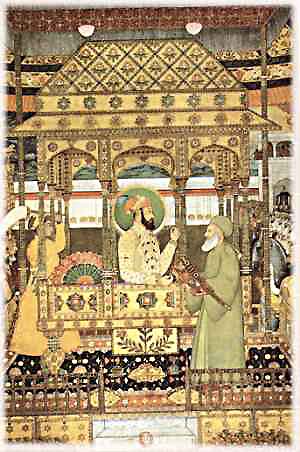 “The sound of the flute is the image of God’s call to man.
“We were all part of Adam and heard those melodies in Paradise.
“Though water and clay have covered us with doubt, we still remember something of those sounds.
“But since they are mixed with the dust of sorrows, how should these high and low notes produce that joy?”

He was a Reviver of this Order and a Reviver of the true path of the Sunnah. He derived great spiritual benefit from his great ancestor, Sayyidina `Umar al-Faruq

, and from his grandfather, Sayyidina Ahmad al-Faruqi (q). With the blessings of the Prophet

he was able to spread this order far and wide.

He was born in 1055 H./1645 AD. He was raised in the home of his father, Muhammad Ma’sum, and he was nursed with the milk of the knowledge of his father, his grandfather and his blessed ancestors. During his father’s life he sat on the Throne of Guidance and he followed the footsteps of his precedessors. His house became a light for the scholars of the religion, who came like moths from all around. As his subtle knowledge grew, his fame rose ever higher in the heavens, reaching the orbits of the Knowers, until he was able to decipher the Symbols of Hidden Knowledge and to open the Treasure of Heavenly Affairs. He spread the external and internal knowledge, and he joined together the Beginners and the Adepts, and he taught the Knowledge of Taste (dhawq).

On the orders of his father he moved to the city of Delhi to spread the knowledge of the sharica and the light of the  araqat. The Sultan himself, Muhammad Alamagir, became his student, and consequently the people of the Court, the Sultan’s ministers, and all the princes became his followers. With the support of the Sultan, it was not long before the entire kingdom accepted him. He embodied the Sunnah of the Prophet

and inspired love for the sharaca throughout the nation. By means of the deep knowledge which filled his heart, he hoisted high the flag of Islam and removed the traces of ignorance and tyranny from the kingdom.

Through the blessings of Shaykh Sayfuddan’s companionship, Allah made the Sultan succeed in all his affairs and prevented harmful and unlawful conduct from occurring in the realm. The Sultan banished tyrants and oppressors. He kept the company of the Shaykh, following him as a student. Through the Shaykh’s encouragement, he was able to memorize the Holy Qur’an. He spent his late night hours fulfilling the obligations of the  araqat, reciting the Dhikr, while his daylight hours he spent looking after the affairs of his kingdom.

The Shaykh endeavored to eliminate all forms of misery and tyranny from the kingdom by means of the Sultan, and achieved tremendous success, until the whole of India was living in peace. He achieved such a position of reverence, that all sultans and princes would stand in his presence out of respect for him.

One day a man was standing with the other princes and Sultans in the presence of the Shaykh, and an insinuating whisper came to his heart, saying, “That Shaykh is so arrogant.” The Shaykh looked at him and said, “You are right, because my Pride is from Allah’s Pride.”

Once a man denied the truth of the Shaykh’s words. That night he saw a dream in which a group of men came and attacked him. They beat him and beat him, asking “How dare you deny the speech of the Shaykh when he is the Lover of God?” He awoke to find himself in severe pain. He hastened to the presence of the Shaykh and asked his forgiveness.

In his khaniqah (center for retreat), every day around 6,000 seekers slept and ate from the food he was providing.

One day he heard from his neighbor’s house the sound of the ney (bamboo flute). He was so enchanted by the sound of it that he fainted. When he came to he said, “Do you think that I am empty of compassion and emotion? No, those who listen to the ney and feel no compassion and emotion are empty. But when we hear something beautiful, we are so touched that we are immediately transported to the Divine Presence.”

To the saints, God’s call is heard without any admixture of the “dust of sorrows” and that is why they faint when they hear it.

One day a leper came and asked him for his supplication that he be healed. He blew on him and immediately the disease disappeared.