Seek The Real Salah (Prayer) of The Soul

They come into our lives to clarify the understanding and the ways with which to reach Allah (Azza wa Jal)’s satisfaction. Like a spiritual attorney. You have the external Shari’ah attorneys and you also have the Awliya and wilayat that there are spiritual attorneys, where they clearly understand the Contract. And within the Contract they are able to pull all sorts of realities so that the seeker can reach to Allah (Azza wa Jal)’s satisfaction in the most perfected form.

Are you Under Impression that Your Salah Counts?

“It (Ihsan – Station of Excellence) is to serve/worship Allah as if you behold [See] Him; and if you don’t behold [See] him, (know that) He surely sees you.” Prophet Muhammad (saws)

That is salah! That `abd and every act of `ibadat that they do is with the power in which they see what Allah (Azza wa Jal) wants them to see and that their hearts are open, they are Ahl al Basirah. If the heart is not open then every `amal they do, they come back and say, “Don’t be so quick to think Allah (Azza wa Jal) accepted it.

If the Salah was Accepted, You would See

If you are Blind in Dunya, You will be Blind in Akhirah

It means what? As soon as you say, “Allahu Akbar,” the physicality is a means, is a vehicle with which you are praying using the physicality from dunya, but your soul must be reaching Akhirah. Does it make sense?

Allah (Azza wa Jal) clarifies in Qur’an: if you are blind in dunya (material world) you will be blind in Akhirah (hereafter).

They come into our lives and say, “That is what Prophet (sallallahu alayhi wa sallam) was talking about. That salah counts, don’t leave that salah.” (hadith)

But if you have not reached that, then don’t put all your expectations on your salah. Salah is something mandatory, you have to do it but you don’t put any expectation that it is counting.

We have said before many times, they come and they want to pray along excessively in front of everybody. They do lots of raka’ats (prayer cycles) in front of everybody and to them maybe they think in their heart that salah is counting. As a result they put a big emphasis on that and say, “Akhee, I don’t need to do Zikr.” Why? Is it because you thought your salah counts? So the humble way and humble path is to come and say, “No, better to be safe and say my salah doesn’t count. I am doing it and Allah ordered me and I am a loving servant. I am not seeking reward from it yaa Rabbi, I am praying.”

The `Amal (action) – 5 Pillars are Based on Intentions

So then they look through the Contract and that is where the barakah (blessing) comes. That there are `amals and secrets where Allah (Azza wa Jal) says: I am giving you a reward not based on your action nor based on your intention. Because the salah and zakat (charity) and the `amal (action) is based on intention. If Allah (Azza wa Jal) wants to grant its reward, it has to be observed what the intention was of that `amal (action)? Did you pray to escape the police and you ran into the masjid? Or you prayed out of love? If you prayed out of love the heart would have opened and you would have witnessed what Allah (Azza wa Jal) wants the servant to witness.

Seek Out Circle of Zikr – The Actions that has Barakah (Blessings)

So then they come and say, “Those `amals (actions) I would do it but I wouldn’t put too much hope

on it, don’t be proud of it. Negate it (action) and if Allah wants to raise the `amal, alhamdulillah. But seek out in the Contract the actions which don’t require anything and that is called barakah. So the halaqas of Zikr all the way to the end where the angel says, “Yaa Rabbi he is not from one of them,” and Allah clarifies, “Give them everything, give them all the blessings.

Ibn `Umar (Radi Allahu Anhu) reported that the Prophet (Peace be upon him) said: “When you pass by the gardens of Paradise, avail yourselves of them.” The Companions asked: “What are the gardens of Paradise, O Messenger of Allah?”
He replied: “The circles of dhikr. There are roaming angels of Allah who go about looking for the circles of dhikr, and when they find them they surround them closely. They call each other and encompass them in layers until the first heaven – the location of which is in Allah’s knowledge.

I am not caring where they come from and how long they sat with them, as soon as they enter that halaqa, that is a Circle of Paradise and wash them, dress them, bless them and take all the bad actions away.”

Zikr is Pure Reward from Allah (aj)- Regardless of Your Intention

That in the Contract has no intention. There was no intention of the servant for the reward, there were no conditions for the rewards, it was pure reward. So that is why it is the best of `amal, the highest level of `amal, the greatest amount of dressing and blessing for the servant. Not that they leave [obligatory actions], but everybody does what they have to do because Allah ordered them.

If you are trying to get blessings and dressings in life and all sorts of goodness, then seek out those actions that Allah (Azza wa Jal) is giving an immense reward for, and seeks nothing from you. He doesn’t care for your intentions because even that one servant who sat in the circle and the angel said, “He is not from them,” so imagine then the worst of intentions. And Allah (Azza wa Jal) says: I don’t care, if he is in that Circle, dress him, forgive him and bless him. That’s the reality.

Common People Salah Vs. Awliya (Saints) are
Like Dial-up Vs. High Speed Internet

They come into our lives and begin to teach: if you want to know the reality of all the `amals, those are deep. The salah that counts in Divinely Presence is the salah that has been activated. That they are not blind in dunya and Allah (Azza wa Jal) is not letting them be blind in Akhirah, means they have a real-time connection. The blindness, for us to understand, is that salah and the reality of the salah is that Allah (Azza wa Jal) wants us to know, it is like your computer, means you have to dial up. When we had the computer fifteen years ago to connect on to the internet you had to dial up.

That was an example of our reality where Allah (Azza wa Jal) says: why I ordered you to make salah five times a day because in this dunya we are heedless. As soon as you stop and begin to pray and try to make your connection you are on an old style dial-up. You are ringing the number and hoping to hear the beep and chuck chuck chuck and the connection got through. What is that old Mac you had, 95 bot, very slow. You typed two letters and it took half an hour to come through on the screen, very slow. That is like the salah, you are making a connection, logging in, and you are praying that this is going in and then all the whispers come, all the thoughts come, all the bad desires come and now that connection is all fuzzy.

Hey, but for somebody whose heart is op 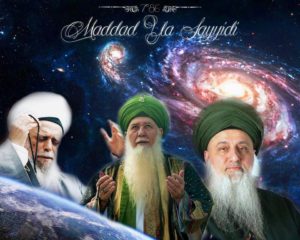 So means that is a connected salah that Prophet (sallallahu alayhi wa sallam) was teaching. Every action because even the word in the Hadith was their ‘worshipness’ not their salah only, but every act of their worshipness is as if they see Allah (Azza wa Jal).

“It (Ihsan – Station of Excellence) is to serve/worship Allah as if you behold [See] Him; and if you don’t behold [See] him, (know that) He surely sees you.” Prophet Muhammad (saws)

If you are going to see Prophet (sallallahu alayhi wa sallam) and you are blind what is the purpose of that? Come back and train on how to open your heart so that you can see Prophet (sallallahu alayhi wa sallam) in Vancouver, in Los Angeles, Michigan, Cyprus and when you enter into Madina ul Munawarrah (City of light) your ziyarat and visitation is real.

That is why the shaykh would say, “Where are you going? Why do you keep going and paying money for all these things and entertaining yourself?

O you who’ve gone on pilgrimage
— where are you? Where, O where?
The Beloved is here, right here
— O come now, come, O come!
Your Beloved is your next door neighbor,
Lost in the desert,
— What are you thinking?

Sit and practise on how to purify yourself and how to open your heart.” Yaa Rabbi, I am in dunya and there is Akhirah and I am not seeing anything. I don’t want to die like that.” Then take a path in which you build your self and open your reality.

[Special thanks to sister Saira and sister Hafsa for their help with transcribing this suhbah.]

Please Support us to spread these heavenly knowledge.

SECRETS OF HOLY QUR’AN: WHAT IS ‘MIN ‘ALAQ’