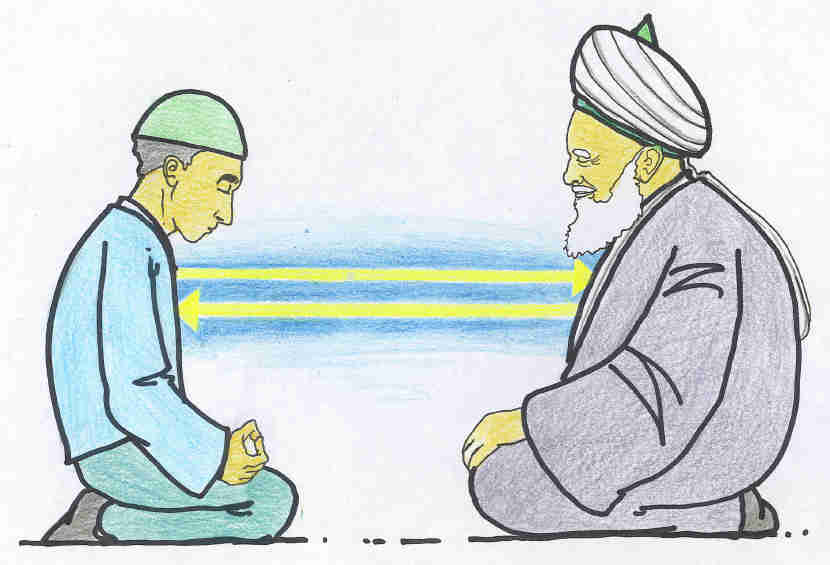 Essential to the progress of the murid towards unveiling and victory over the veils of dunya is the consistent and daily practice of Muraqabah – meditation. For without doubt one is by default immersed in the illusion of dunya and only through seclusion from its perpetual onslaught upon the senses may one hope to escape from its tyranny. Muraqabah then is the immersion in reality and thus the opposite of existence in dunya, which is the immersion in illusion.

The goal and purpose of Muraqabah is to manifest perpetual presence in the reality of the Shaykh. The more one keeps to this vital practice, the more its benefit will manifest in his daily life to the point that he reaches the state of annihilation in the presence of the Shaykh. One must know well that the Shaykh is the bridge between illusion and reality and he remains in this world only for this purpose. The Shaykh is thus a unique rope extended to any who seek freedom for only he may serve as the link between one still mired in this world and the Divine Presence. To be annihilated in the presence and reality of the Shaykh is to be annihilated in reality, in the Presence of the Divine, for this is precisely where he is.

Initially the murid may begin the practice of Muraqabah for short intervals of 5 to 15 minutes, and gradually work towards longer sessions extending even for hours at a time. The important point is that one maintain a consistent practice to obtain benefit. It is manifold better and wiser to keep to a small amount daily than to be sporadic in one’s discipline and practice. A small amount of effort done consistently will result in tremendous progress in even a short amount of time.

The following steps are a guideline towards making Muraqabah (spiritual connection) with Mawlana Shaykh :

Next one must imagine himself entering into the presence of the Shaykh for in reality he is always in the presence of the Shaykh, yet due to heedlessness we are unaware of this basic fact. At this point it is a good practice to give salaams to Mawlana Shaykh (Q) and to make ihtiram (respect), and afterwards to remain still in a position of adab preferably on the knees, fully conscious and awake and connected. One may then allow his soul to converse with the Shaykh, thus defining, strengthening and building his relationship with the reality of the Shaykh, and to follow what Mawlana Shaykh (Q) reveals to his heart.

Such a personal practice is unique and private and the preceding is intended as a general guideline. It is important for each individual to develop his own personal relationship with the Shaykh as is meant for him or her.

Envision Your Shaykh Being Dressed upon you. His face over your face His Beard Over your Chin, His Heart over Your Heart.

Awrad of the People of Determination

GrandShaykh said, “If someone reads Fatiha, he will not leave this world without attaining those Divine Favors that are hidden behind the meaning of the Fatiha which enable him to reach a state of submission to Allah, Almighty and Exalted. The blessings that Allah has sent down with the Fatiha when it was revealed to the Prophet (s) will never cease, and will last forever, with the one who recites the Fatiha. No one is able to know how much blessings there are except Allah and His Messenger (s). Whoever recites surat al-Fatiha, with the intention of sharing in these tajallis, will attain a high position and a great rank. And whoever recites without this intention, gets general Divine Favors only. This surah possesses innumerable and limitless stations (maqamat) in the Sight of Allah, Who is Powerful and Sublime.

He will enter the Circle of Security in the Presence of Allah Almighty and Exalted, and he will reach all the stations of the Most Distinguished Naqshbandi Order. He will be an inheritor of the Secret of the Prophet (s) and of saints, and will arrive at the stage of Bayazid al-Bistami, the Imam of the Order, who said, “I am the Truth (al-Haqq).” This is the magnificent tajalli (manifestation) which belongs to this ayat, and to other ayats also.

GrandShaykh Khalid al-Baghdadi, one of the imams of this Order, received the Vision and the Secret of this Ayat, through which Allah made him special for his time.

Surah Inshira: On each letter and on each ayat there is a tajalli which is different from that on any other. Whoever recites an ayat or letter of the Qur’an, will attain the Divine grace that is particular to that ayat or letter

If anyone recites this surat of Qur’an, he will receive those Divine Graces, tajallis and virtues. Whoever wishes to obtain these virtues, must keep these awrad daily along with his obligations. Then he will gain True Life and Eternal Life.

Surah Nas & Falak: Since they mark the end of the Qur’an, they are linked and associated with the completion of the Divine Graces and tajallis. By means of these awrad, the Masters of the Most Distinguished Naqshbandi Order became Oceans of Knowledge and Gnosis. GrandShaykh Abdullah ad-Daghestani said, “You have now reached the beginning, where each verse, letter and surah of the Qur’an has its own special tajalli, which do not resemble any others. For that reason the Messenger of Allah said, “I have left three things with my Ummah, death which makes them afraid, true dreams which give them good tidings, and the Qur’an which addresses them.” By means of the Qur’an Allah will open up the gates of Divine Grace in the Last Times, as it came down in the time of the Holy Prophet and the Companions, and in the times of the khalifas, and in the time of the saints.

These stations and continuous Divine Graces are closely bound together and they cannot be separated, so any deficiency in the awrad will automatically create a deficiency in the Divine Graces being sent down. As an example, if we want to wash our hands, we may wait in front of the tap for water to come out. If the pipes do not connect properly so that the water escapes before reaching the tap, then, no matter how long we wait, the water will not flow out. So we must not let any deficiency enter our dhikr until we obtain all the tajallis and Divine Graces.

These awrad for the of followers, must be performed once every 24 hours, together with all other obligations, according to the shari’ah of the Prophet (s). Everything which the Prophet (s) brought, was founded in these awrad. It is the way that the slave reaches the key of nearness to Allah, Who is Powerful and Sublime. It was by means of it that the prophets, messengers and saints reached their Creator, and it is by means of these awrad that we reach all these stations of the Most Distinguished Tariqat.

In our time, Grand Shaykh Abdullah ad-Dagestani said, “Whichever of the People of the Last Time (akhir az-zaman), wishes to attain a high rank and an exalted state, and get what a murid normally gets by means of seclusion (khalwat), and spiritual exercises, then he must continuously perform these awrad (Dhikr). With this awrad we have set the foundations for the higher stations, which are built on this foundation. The murid ought to know that if he fails to attain an exalted station and high grade in this world because of his lack of effort, then he shall not be separated from this world, but that the Shaykhs make him reach it, and reveal for him his station, either during his lifetime, or at the time of the seven last breaths during the agonies of death.”

“If anyone performs these awrad (dhikr) and then performs an action which is forbidden he will be like the one who builds his house on the side of a cliff, and then his house collapses down the side of the cliff. So we should always be aware of our actions, gauging them to see if they are halal or haram, if Allah is going to be angry with our actions or not. And we need to think about every action that we are about to do so much that ultimately we do not do any haram thing which might weaken our foundation. And that is why we have to think before every action. As the Prophet (s) said in his hadith ‘One hour’s contemplation is better than seventy years of worship.’ We should perform our actions in the perfectly correct way, that is to say without any haram deeds intervening.”

“On this basis Allah has divided the day into three parts: eight hours for worship, eight hours for earning a living and eight hours for sleeping. Anyone who does not accept and follow this division of energies will exemplify the hadith, ‘He who is erratic will be erratic in the Hellfire.’ He who goes according to his own will and reasoning does not progress and he who wishes to obtain exalted stations, levels and stages which previous generations earned by means of retreats and other spiritual exercises, must remember Allah throughout the course of the day.”

GrandShaykh continued, “He who makes a regular practice of the awrad (dhikr) shall attain the Water of True Life, and with it he will perform ablution. He will bathe in it and drink it and by means of it shall he reach his goal. There is such a person who claims that he has been in the Order for thirty years, and as yet has not seen anything and not attained anything. The answer to that person is to search and look at his actions over the past years. How many deficient actions has he performed? When you know the deficiency you should quickly avoid it, then you will reach Allah Who is Powerful and Sublime. When the murid forsakes that which the Shaykhs have told him to do of the daily duty (wazifa), then he will be absolutely incapable of making further progress and he will be unable to reach any state he had previously attained. No Prophet ever attained prophethood, nor did any saint ever attain sainthood, and no believer ever attained the stage of faith without utilizing his time for his daily dhikr.”