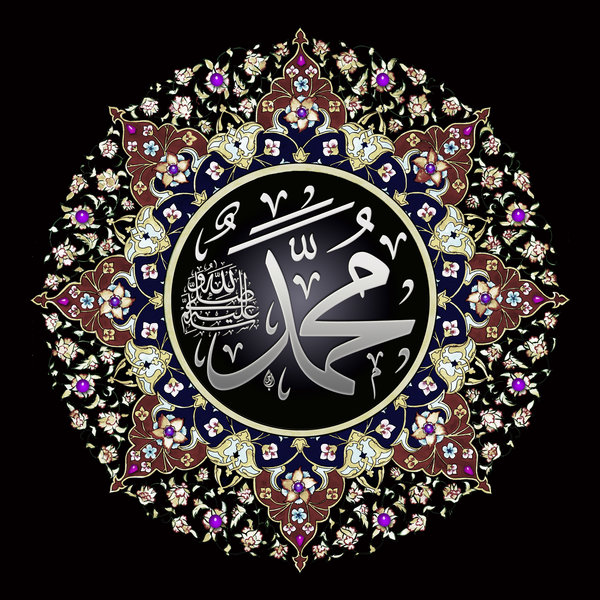 The Mercy of Allah (AJ) Allows Us to Enter Into Fasting 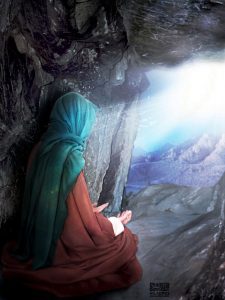 To serve Allah (AJ) and to enter into siyam (fasting). Once Allah (AJ) allowed us to enter into siyam, immense blessings of Allah (AJ) to grant forgiveness. Because of that rahmah and mercy that dresses the servant and brings them and draws them into the presence and reality of Sayyidina Muhammad ﷺ. That no doubt, that Prophet ﷺ begin to pray upon them and their souls. And Allah (AJ) begin to wash away every type of difficulty, and perfecting them through their soul and through their body, inshaAllah being washed and cleansed.

“Indeed, We granted you, [O Muhammad], a manifest Victory. (1) That Allah may forgive you your faults of the past and those to follow; and fulfil His favor upon you and guide you to a straight path. (2) And [that] Allah may help you with a mighty victory.” (The Victory, 48:1-3)

Prophet Muhammad ﷺ is the Immense Secret Brought on Earth 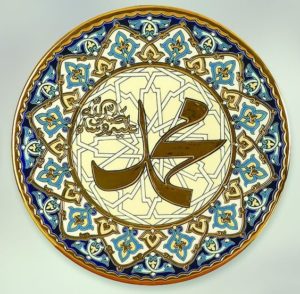 “Fatham Mubeen” (Holy Qur’an, 48:1), the immense opening, is Sayyidina Muhammad ﷺ. When Allah (AJ) is saying, ‘We have granted you an opening’, that opening is the arrival and the appearance of Sayyidina Muhammad ﷺ. Allah’s (AJ) Immense Rahmah, Allah’s (AJ) Immense Secret that He brought upon the earth to reveal its identity and its reality ﷺ. No doubt Allah (AJ) then describing, ‘It’s an immense opening.’ That is the clear opening of the deen of Allah (AJ).

Only Khalifa of Allah (AJ) is Prophet Muhammad ﷺ

That all prophets were waiting for that arrival. And Allah (AJ) asked in holy Qur’an and told every prophet in their agency of risalat (messengership) that, ‘If your boss comes, if he comes, if Sayyidina Muhammad ﷺ comes in your time, you are to follow him.’ And they said, “Qalu bala.” ‘Yes.’ It means that you are – your prophecy is nothing in the appearance of the prophecy of My Beloved Sayyidina Muhammad ﷺ, for he is the khalifa (representative) of Allah (AJ). Everyone else is his khalifa, is his representative. Because it’s “Atiullah wa ati Rasul”, and the most authorized one that Allah (AJ) is thinking about in this ayatul Kareem (Qur’anic verse) is Sayyidina Muhammad ﷺ, not thinking about any other prophet.

Sayyidina Muhammad ﷺ is the Only One Who Hears Allah (AJ) 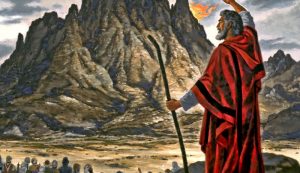 “Had We sent down this Qur’an on a mountain, verily, you would have seen it obliterated to dust (from its power)…” (The Exile, 59:21) 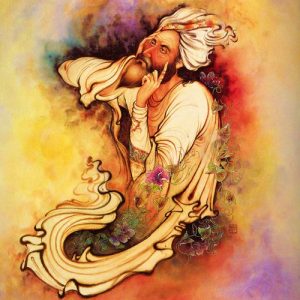 So, then in our understandings and haqaiqs (realities) and all our awliyaullah (saints) teachings, that, ‘Allah (AJ) speaks only to the heart of Sayyidina Muhammad ﷺ.’ So then, who did they hear? They heard Prophet ﷺ. And that is why Nabi Musa (as) in his ma’rifah (gnosticism) is he’s wanting to reach towards realities. He’s understanding, the one whom he is hearing, he wants more yaqeen (certainty). ‘This beautific reality of what I’m hearing, I want the yaqeen to see you.’

“And when Moses arrived at Our appointed time and his Lord spoke to him, he said, “My Lord, show me [Yourself] that I may look at You.” [Allah] said, “you will not see Me, but look at the mountain; if it should remain in its place, then you will see Me.” But when his Lord manifested His glory on the mountain, He made it as dust, and Moses fell unconscious. And when he awoke/recovered his senses, he said, “Glory be to You! to You I turn in repentance, and I am the first of the believers.” (The Heights. 7:143) 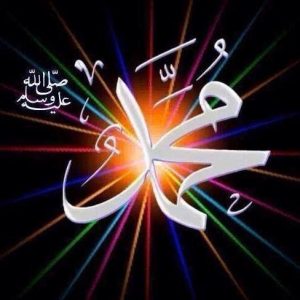 From one whom is above all the understanding of awliyaullah, Kalimullah, of course he knows he is not dealing with Allah (AJ). He’s asking for an audience with Sayyidina Muhammad ﷺ. And Allah (AJ) said, ‘I’m going to send you to the mountain, and what I reveal, I’m going to send from My Glory, My Subhan.’ At that time we see, and Allah’s (AJ) Glory is the light of Sayyidina Muhammad ﷺ, and he met his Rabb (lord). At that time, he met his Rabb and became Muhammadiyun. Said, ‘I’m going to now, Qul inna salati wa nusuki wa mahyaya wa mamati lillahi rabbil aalamin, ana awwal muslimeen.’

Say, “Indeed, my prayer, my services of sacrifice, my living and my dying are for Allah, Lord of the worlds.  No partner has He; and this I have been commanded, and I am the first of those who submit.” (The Cattle, 6:162-163) 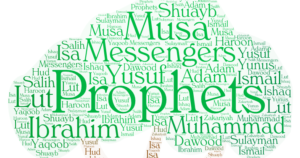 So then no doubt itkun minan naar (save us from the fire (hellfire)) is that Prophet’s ﷺ dress and blessing upon his nation. That, ‘I dress you and bless you and that you kept this way of ours, struggled through its difficulties and all its obstacles.’ That the love of Sayyidina Muhammad ﷺ dress us, bless us, perfect us, and keep us far from the difficulties of fire. But enter into the fire of ishq and muhabbat (love). 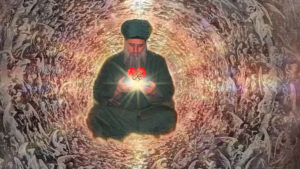 put into the heart of the believer. Awliyaullah (saints) achieved the light from Sayyidina Muhammad ﷺ in their heart. What we call a diya which is a naar; it’s a fire, it’s not a reflection. Their heart became lit with an eternal flame. Their heart is a diya. It’s producing light – Nurun ala Nur, a light upon light.

“Allah is the Light of the heavens and the earth. The Parable of His Light is as if there were a Niche and within it a Lamp: the Lamp enclosed in Glass: the glass as it were a brilliant star: … though fire scarce touched it: Light upon Light!…” (The Light, 24:35) 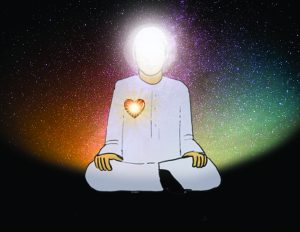 Its source, they don’t understand. It comes from the heavens and from Allah (AJ) to Prophet ﷺ. From Prophet ﷺ to ulul amr (saints). And Allah (AJ) made their hearts a diya, a shams (sun) and their face, and their head became a qamar (moon). Their heart is a light and their face is a nur (light). The heart is a sun that produces light and it reflects to the face to become a nur.

That itkun minan naar (save us from the fire (hellfire)) is, ‘Ya Rabbi, take us away from the fire of burning and the fire of bad character, and the fire that we put upon other people. And bring that fire into my heart to be a fire of patience, of constancy, to be consistent in what we are doing, and it become a fire of ishq and muhabbat. It become an eternal flame. That it’s lit and is blessed by these duroods and these naats (praisings). Its praisings are the fuel for the fire within the heart of the ashiqeen (lovers). As soon as they praise, their heart is burning like a charcoal.

Praisings Upon Sayyidina Muhammad ﷺ Quench the Thirst of Love 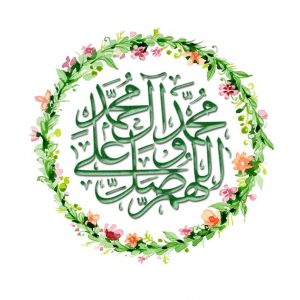 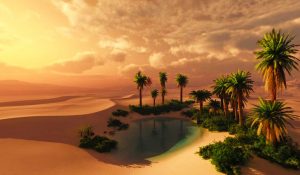 Even along the way, like a caravan, Allah (AJ) sends beautific fruits. They don’t live bad. I don’t know who thought that pious people were supposed to be poor. The whole of dunya (material world) is under their control and under their command. You may have seen too many Christian movies where they’re supposed to take a vow of poverty. No, no, there is no vow of poverty. Allah (AJ) gave the entire wealth of the dunya under their command. It doesn’t satisfy them. It doesn’t bring them the satisfaction that they were looking for because their satisfaction is only in the zikr (remembrance) of Allah (AJ).

So, they walk through this dunya like a desert and they’re moving, moving, and moving. And only the zikr, only the praising, brings an oil and a refreshment into their heart. And as soon as they praise, they begin to feel the energy and the Glory of Allah (AJ) and the love of Sayyidina Muhammad ﷺ that illuminates.

Pray For Allah’s (AJ) Favours Upon You – Time is Short 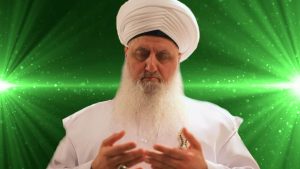 We pray that Allah (AJ) grant us the freedom from this fire of dunya (material world) and all its attachments. And to drink, and to quench our thirst from the nectar of His love, from the reality of His Divinely Love, inshaAllah. That Allah (AJ) knows that we are running out of time.

We pray that Allah (AJ) grant us that rahmah (mercy), grant us that blessing. That time is short, ya Rabbi, times are coming to an end. Grant us and complete Your ni’mat (blessing) and all Your favours upon us, not because of us and our actions. Our actions are weak, but because of the love that we have for Sayyidina Muhammad ﷺ and the Mighty Power that You have given to Sayyidina Muhammad ﷺ. If You say ‘Yes’, immediately Prophet ﷺ will lift and take the servant. All it requires, ya Rabbi, is that You grant the approval.

Urdu – Soul is like the She-Camel of Prophet Saleh [AS], nourish it with energy of Zikr…